Options for Exiting from a SEZ Unit – A complete overview 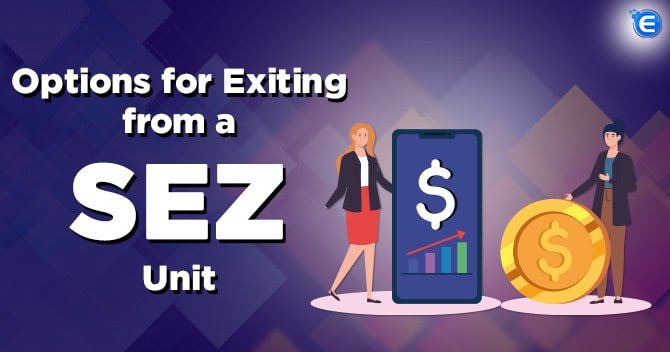 In the year 2000, the Government of India established a scheme for setting up of business zones or units to increase the production processes, gross domestic (GDP) and generate employment opportunities. These units or zones are called Special Economic Zones (SEZs).  This was brought out by the government of India when there was an amendment to the Export-Import policy in 2000. The reason behind bringing the SEZ establishments was due to Chinese developments.  Some of the benefits which are allowed for SEZs are not permitted in standard operating zones. Over time the development of Special Economic Zones has diversified, and there are different categories of special economic zones.  Companies have the option of exiting from a SEZ unit. However, there are specific criteria required to be followed before exiting from a SEZ Unit.

Special Economic Zones (SEZ) are zones which are delineated to enjoy different tax benefits. Some of these benefits allow companies to operate in these zones on a duty-free basis. Therefore these zones form foreign territories for conducting industrial activities, manufacturing activities, software activities, financial and trade activities. The fiscal and regulatory norms in these zones are liberalized and relaxed so that companies can generate more revenue. The generation of income will indirectly affect the development of the GDP of the country. Apart from this, the development of special economic zones attracts more amount of foreign direct investment in India.

These SEZ go by different names. Some of the names provided to an SEZ go by the services that are offered in the particular zone. There are different types of SEZs in India. Apart from this, an SEZ is classified on the activities carried out in a specific area. For understanding the options for exit by SEZ units, the following zones have to be categorized.

Types of Zones- Exiting from a SEZ Unit

Therefore these zones are established for companies or units to enjoy the benefits. At the same time, companies are allowed to carry out their activities. When a company opts for exiting from a SEZ Unit, then specific requirements have to be followed by the company.

Advantages of SEZ Units- Exiting from a SEZ Unit

There many advantages enjoyed by a company that establishes itself in an SEZ. Some of the incentives enjoyed by the company/ unit are:

Therefore a company or unit has to keep in mind the above issues when exiting from a SEZ unit.

Legal Framework for SEZ- Exiting from a SEZ Unit

Application for Setting up a Special Economic Zone

The state government will consider the application on a case to case basis. The concerned state government would forward the proposal to the board along with recommendation letters. The minimum area requirement for setting up a special economic zone has to be satisfied. There are different types of special economic zones, and their area requirements vary on a case to case basis.

Once the SEZ units are formed, they will be continuously monitored on their performance. The performance would be taken into consideration when a company is exiting from the SEZ Unit. Apart from the performance criteria that are monitored by the Unit Approval Committee, there are several compliances which have to be followed by the company before exiting from a SEZ unit. One of the requirements is for the company or the unit to have a positive NFE earning. This is required so that the SEZ can be more attractive to other investors. The performance of the SEZ unit has to be according to the guidelines which are present under various regulations. Therefore a company has to follow these guidelines before exiting from a SEZ Unit.

Guidelines for Exiting from a SEZ Unit

Therefore a company exiting from a SEZ unit would have to follow the above guidelines. Apart from this, the company would have to obtain several clearances from the government and concerned authorities.

Special Economic Zones (SEZ) are specially designated zones for carrying out specific economic activities. These zones allow industries operating in different sectors to operate at maximum efficiency. There is no excise or any form of duties applicable in these zones. Goods that are sent from these zones are goods exported. Goods received in these zones are considered as imported goods. No duty is payable on imported goods in these zones. Domestic Tariff Areas (DTA) are zones outside the SEZ which have normal conditions related to business. Goods can be imported to SEZ from DTA.  There are guidelines that the company has to follow before exiting from a SEZ unit. If these guidelines are followed, then a unit can exit from a SEZ without any issues.

Receipt of Gifts and Inheritance by...

Dealing with real estate matters in India could be a complex task, especially for an NRI under...

Challenges of Enforcement of Foreig...

The New York Convention for enforcement of arbitral awards is an international convention, whic...

Insurance under FEMA: Treatment of...

The insurance sector is highly regulated. Even before independence, there were many corporation...