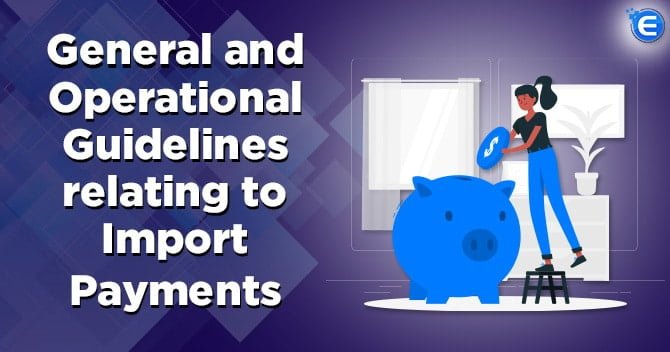 As per section (p) of FEMA, the term import means bringing any goods or services into India. Import trade is regulated and managed by the Directorate General of Foreign Trade under the Ministry of Commerce and Industry, Government of India. Authorized Dealer Category-I (AD Category-I) banks must ensure that the imports into India are in accordance with the Foreign Trade Policy and Foreign Exchange Management (Current Account Transactions) Rules, 2000 formulated by the Government of India and the directions issued by the Reserve Bank under Foreign Exchange Management Act, 1999 (FEMA) from time to time.

AD Category –I banks may allow remittances for making payment for imports into India once all the requisite details are made available by the importer, and as per applicable laws in force, remittance is for bonafide trade transactions.

Obligation of Purchaser of Foreign Exchange

Notwithstanding anything covered in the Manner of Payment in foreign exchange, a person resident in India can make import payments in foreign exchange via an international card held by the person, in rupees from international credit or debit card through the credit or debit card servicing bank in India against the charge slip or as specified by the Reserve Bank from time to time, provided that the transaction is in compliance with the extant provisions and the import is in compliance with the Foreign Trade Policy in force.

Any person resident in India can also make payment-

Deferred Payment Arrangements up to five years are treated as trade credits for which the guidelines as laid down in the RBIs master circular may be followed.

Read, Also: Compliance for Import of Goods under FEMA Law.

Write off of Import payments

AD Category –I banks have been allowed to offer the facility of import payments of goods and software of value not exceeding 2000 US dollars by entering into standing agreements with the Online Payment Gateway Service Providers subject to the following:

In order to liberalize the procedure and to facilitate the settlement of import payments where the invoicing is in a free convertible currency, and the settlement takes place in the beneficiaries currency which doesn’t have a direct exchange rate, has been decided that AD Category –I banks might allow settlement of such import transactions subject to the conditions like the importer shall be a customer of the AD bank, where the signed contract is in a freely convertible currency, etc.

The Significance of Foreign Exchang...