Compliance for Import of Goods under FEMA Law 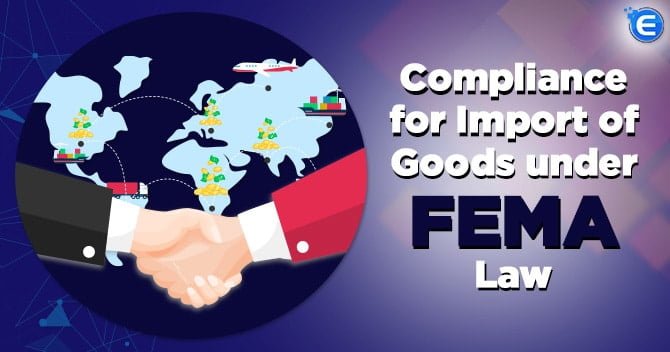 Importing is the process in which goods are brought into a particular country. The mode of import can be through land, air, or the sea. For bringing in goods into the country, there are several restrictions placed by the Government of India, Customs Officers and Border Forces. As long as goods brought into the country are compliant with the relevant import laws, they would be allowed in the country. There are several restrictions placed on goods brought into a country. Certain classes of goods are prohibited from the country. Hence it is crucial for the importer and seller to be compliant with the laws related to import of goods into the country.  Compliance for the import of goods under FEMA law has to be maintained by the importer and the concerned parties.

To understand the import of goods under FEMA law, the following terms have to be defined:

Institutions dealing with Imports- Import of Goods under FEMA Law

Authorized banks must ensure that importers are compliant with the Foreign Trade Policy before carrying out import related activities in India. The law which applies to the import of goods into India is the Foreign Exchange Management Act 1999 (FEMA). Apart from this, the import of goods under FEMA law would also be covered by Foreign Exchange Management (Current Account Transactions) Rules, 2000. The Reserve Bank of India regulates foreign exchange management in the country. Therefore the Authorised dealer also has to comply with the rules issued by RBI on foreign exchange.

There is no particular procedure for import transactions and import of goods under FEMA Law. When transactions are conducted on behalf of importers, certain guidelines have to be followed. In absence of specific regulations, normal banking conditions would apply to authorized banks. However, banks have to be vigilant when it comes to conducting background and KYC (Know Your Client) checks on their customers.

Authorized Dealers/ Banks allow remittances to be made when goods are brought into the country. However, the importer has to make sure that compliances have been followed before carrying out the transaction. Remittances have to be made for bonafide transactions.

Import Licences would be required for the import of goods under FEMA Law. There are various categories of goods that are prohibited according to the Foreign Trade Policy. Goods that do not have any restrictions would be allowed to be imported into the country. For this, authorized dealers can open letter of credits (LOC) and permit remittances for conducting imports. When the authorized bank opens a letters of credit, copies of the import license should also be attached to the letter. This is required for Exchange Control Purposes. A copy of the letter of credit and the import license has to be maintained by the authorized bank for verification by inspectors and internal auditors.

If the individual uses foreign exchange for importing goods into the country, then the authorized bank must make sure that the importer publishes some receipts or evidence on the import of goods.  This must be mentioned by the importer in the Import Data Processing and Monitoring System (IDPMS), Postal Appraisal Form, and the Customs Assessment Certificate. The importer and the authorized bank must confirm that the value of the remittance is equal to the value of the goods imported.

This system has been streamlined and developed by the RBI along with several institutions. The main aim behind this system is to increase the efficiency of import processing transactions. Apart from this, effective monitoring of import transactions can be made through this system. Authorized banks must make sure that all remittances related to import has to be uploaded on the IDPMS.

Mode of Payment- Import of Goods under FEMA Law

An individual in India can be the importer of goods. For the payment to be made, the following conditions have to be adhered to:

The individual can also make the payment in rupees:

Time for Payment Settlement- Import of Goods under FEMA Law

Payments made by the importer for imports through the authorized bank must be no longer than six months from the day of shipment of the goods. This would not be applicable in cases where payments are withheld towards some form of guarantee for the performance of the service. The settlement of import dues will be allowed by the authorized bank if there are delays in making the payment. Such delays are caused by legal disputes and financial difficulties that are faced by the importer. If there is any form of interest applicable to these bills, then payment of interest is only allowed for three years. This would be three years from the date of shipment of the import.

Any such cases which are not covered by the above would be referred to the RBI.

When an applicant wants to import goods into India, then an application has to be made. An individual, company, or partnership that wants to import goods into India must make this application in Form A1. This form can be used for remittance purposes and transfer of rupees to Non-Resident Indian Bank accounts. The applicant has to be diligent while filling the form.

A third party is allowed to receive payments from the Authorised Dealer. However, there are certain conditions which have to be fulfilled for this:

Therefore a third party can receive payment for the import of goods under FEMA Law. However, the parties have to comply with the above conditions before entering into the transaction.

Conclusion- Import of Goods under FEMA

Importing is a process of bringing in goods into the country. The parties in an import transaction have to be compliant with various regulations. The Authorised dealer has to follow the guidelines issued by the Foreign Trade Policy and the RBI related to conducting import transactions. There is no specific procedure for importing products into the country. The importer has to make a remittance to the seller through the authorized bank. Once the seller receives the payment, the products are sent to the importer. There are certain requirements that the importer is required to have in mind while receiving the imports. The authorized dealer has to monitor the process of imports. Therefore an importer has to follow specific rules for import of goods under FEMA law.

Overview The investment by foreign entities has significantly improved in the last few years in...

Acquisition of Immovable Property in India as per FEMA guidelines is related to individuals who...

Foreign Investment in India and its...

Overview Foreign Investment in India has been the direct result of policies undertaken and impl...