What are the Provisions of Audit Under GST 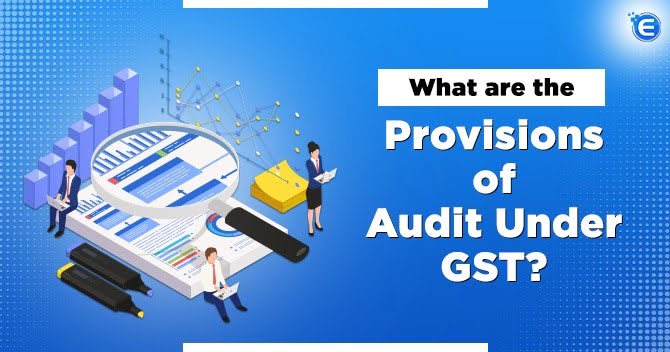 In this article let us discuss the provisions relating to Audit under GST laws. But let’s try and understand what the audit is, and what is its significance?

The audit is basically a systematic and independent examination of financial records and accounts of an organization to verify its correctness. If the proper audit is conducted at specified regular intervals, it increases the value and credibility of the organization and builds up investor confidence. The audit can be internal or external.

Like other laws, GST laws also provide for Auditing provisions. As we have discussed the purpose of the audit is to check the authenticity of the documents and records of the taxpayer registered under GST. A few of the details checked under GST audit are GST invoices declared turnover, taxes paid, refunds and ITC claimed, etc.

Audit under GST can be of the following types:

This audit is not ordered by any tax authority, it is a threshold-based audit requirement. Sub-section 2 of Section 44 under the Chapter of Returns under the CGST Act,2017[1] states the provisions relating to audit by a taxable person. This section requires any registered taxpayer whose aggregate turnover during a financial year exceeds the threshold limit of Two Crores Rupees are required to get their accounts audited by a chartered accountant or a cost accountant.

They are required to furnish a return in FORM GSTR-9C, which shall include a certified copy of the following:

Audit under GST: An Audit ordered by GST Authorities

In an audit conducted by the order of the commissioner, the proper officer along with the team of officers assigned to him verify the correctness of the:

If any discrepancies are found by the proper officer then they are required to communicate the same to the registered taxpayer, who shall furnish his reply in the prescribed manner.

Responsibilities of the Auditee

It is the responsibility of the auditee –

On the conclusion of Audit under this section, it is the responsibility of the officer to communicate the result and findings along with the rights and obligations of the taxable person to him within 30 days of the conclusion of audit.

Special Audit provisions are mentioned in Section 66 of the CGST Act, 2017. It can be initiated by any officer not below the rank of Assistant Commissioner only when they are not satisfied with the scrutiny, inquiry, investigation or any other proceedings conducted before him. However, it can only be initiated with the proper approval of the Commissioner and the registered taxpayer is required to get their accounts audited through a chartered accountant or a cost accountant nominated by the Commissioner.

On the conclusion of Audit under this section, the findings are communicated in the Form GST ADT 04.

If after the conclusion of the audit under GST, the proper officer is of the opinion that;

The action must be initiated under section 73 or section 74 of the ACT.

The Department issues circulars to provide any clarifications to a large number of people regar...

The Significance of E-way Bill Gene...

When is E-Way Bill Required under GST? Whenever the movement of goods takes place and the value...

Due Dates for Filing GST Return...

GST Act requires various returns to be filed for different types of taxpayers. Most of those re...