Prohibition on Acceptance of Deposit as per Companies Act, 2013 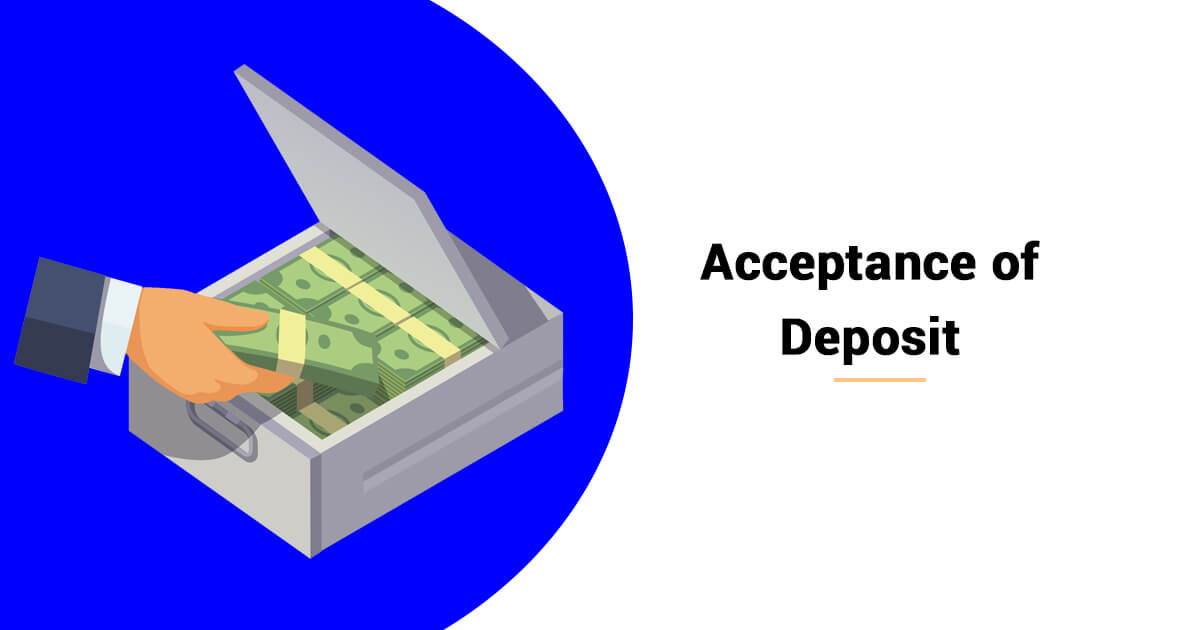 After the onset of this Act, no Company can accept, invite, or renew deposit under this Act from the public, with some exceptions as mentioned under Chapter V.

Section 73 to 76 of Companies Act 2013, along with Companies Rules 2014 under the Chapter V of the Act provides regulations related to the invitation and acceptance of Deposits. The provisions of Section 73 are applicable to all type of companies. After the initiation of this Act, no company is allowed to invite, accept or renew deposits under this Act from public except in a way mentioned under Chapter V.

What is a Deposit?

The term “Deposit” is generally used in financial transactions, but it can also be used in other situations as well.

Commonly there are two types of deposits in the banking world. These include Demand deposits and time deposits.

According to Rule 2(1) (d) under chapter XV depositor means:

Prohibition on Receiving of Deposits from Public

Chapter V, Clauses (a) to (e) of Section 73(2) contains the details of the exemptions related to Specified IFSC Public Company and Private Companies.

The provision of Accepting Deposits does not apply on Private Companies under the Companies Act, 2013, under the following conditions;

Furthermore, the provision of Accepting Deposits does not apply upon a Specified IFSC Public Company that accepts from its members the amount not exceeding 100% of the aggregate of the paid up share capital and free reserves. Moreover, such a company is prescribed to file the details of monies accepted to the Registrar in the specified manner.

Conditions for Acceptance of Deposits from Members

A company may accept deposit from its members by fulfilling the requirements specified in the Act, which has been framed by the Central Government of India in consultation with Reserve Bank of India. According to Section 73(2) company may subject to:

According to section 73(3), every deposit accepted by a company under subsection (2) shall be repaid with interest in accordance with terms and conditions of the agreement referred to in that sub-section. If the company fails to repay the deposit, then according to section 73(4), the depositor concerned can apply to the Tribunal for an order directing the company to pay the due amount or any loss or damage caused due to the company’s negligence.

Benefits for the Depositors

The provisions of Companies Act 2013 read with rules made under Chapter V, has brought several spruced up aspects to protect the interest of depositors. The overall essence of the provisions discussed above is as follows:

As per this Act, no Company is allowed to accept, invite or renew deposits from the public. Furthermore, the commencement of this Act has brought many benefits to the depositors. It has generated a sense of security in the minds of depositors about the money they have deposited. On the other hand, companies will have to adhere to new regulations and act accordingly. If a company fails to do so, it will have to face some serious implications.

People Also Read: MCA Requires Reporting on “What is not DEPOSIT?”.

How Corporate Governance in India a...

Corporate Governance states the set of principles, processes, and systems that regulate the Com...

Appointment of Directors Under Comp...

A director may be defined as an individual who directs, controls or manages the affairs of the...

Checklist for Certification of Annu...

Every company needs to file an annual return. Basically, this is a document that contains infor...