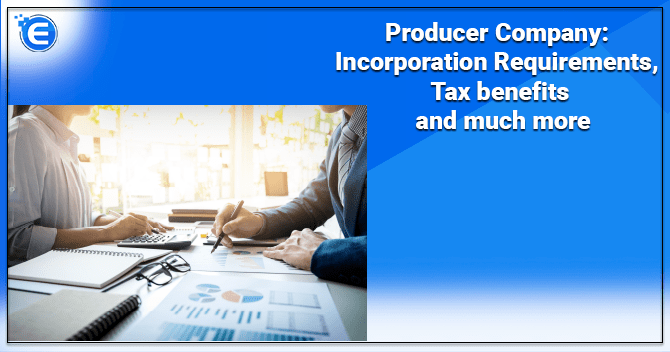 Our country’s economy is agriculturally based, where close to 60 % of people depend on agricultural activities for fulfilling their daily requirements. However, the farmers and the agriculturalists had faced a lot of struggles in India. With a view to resolve the hardship faced by them, the Government of India, under the leadership of Y.K Alagh, set up an expert committee to tackle the challenge faced by the Indian farmers and all. Consequently, the concept of Producer Company registration was introduced in the year 2002 to the Indian economy. It served the need of primary producers to gain on various fronts like production technology, market, credit, etc. Through this article, we shall cover the multiple aspects of a producer company like requirements for incorporation, tax benefits, registration procedure, etc.

Meaning of a Producer Company

Producer Companies are a legal body recognized as a corporate entity with an aim to improve the living standard of the farmers and agriculturalists and to ensure enhanced incomes and profitability. The producer companies registered under the Companies Act is incorporated with the following objectives:

Activities of a Producer Company

Producer companies are a body corporate which is required to carry or relate to any of the following activities mentioned below:

It is important to note that Primary produce under the Companies Act, 1956, is defined as a produce arising from agriculture by a farmer that include floriculture, animal husbandry, horticulture, viticulture, re-vegetation, forestry, farming plantation products, produce of handloom, handicraft and other cottage industries.

Incorporation requirements of a Producer Company

What are the types of Producer Companies?

Primarily, there are five types of Producer companies, namely:

Production is related to the use of raw material to produce something. The production businesses are involved in the production and procurement of the items.

The marketing business involves selling the farming products to other companies and consumers. The businesses that are involved in the promotion or marketing of primary production may also be a Producer Company.

This business refers to the technical analysis of a product. A company that is providing technical assistance to the producers and which conducts research and development may register itself as a Producer Company.

The company under such business helps the producers to achieve the financial goals.

The company under the infrastructure business provides the producers with infrastructure in the form of electricity, irrigation techniques, water resources, etc.

Various Compliances for the Producer Companies

Following compliances of Producer Companies must have to adhere :

Registration of a Producer Company

The first stage involves obtaining the Digital Signature Certificate (DSC) from all directors and the Directors Identification Number (DIN). The documents needed for DSC are Pan Card, Adhar Card, and other contact details of the directors. DIN can be obtained by filing DIR-3 Form with identity proof, address proof, and a photo.

The name of the proposed company is filed through Form INC-1 to the ROC (Registrar of Companies) with the requisite fees applicable. The proposed name of the company must have “Producer Company” at the end.

Other required documents must also be filed like a declaration in the format of Form INC-8 by a professional, an affidavit signed by the subscribers of the proposed company stating their competency to be a subscriber. Apart from these, a utility bill and a Non-objection Certificate must be taken from the owner whose address will be used as the registered office. All the relevant documents shall be attached to form INC-7, 22, and DIR- 12 and will be uploaded to the ROC website.

Once the ROC verifies every detail, it shall issue a Certificate of Incorporation, thereby permitting the company to commence its business operations. It is critical to note that under no conditions, a Producer Company can change itself into a Public Limited Company.

The producer Companies can avail the following benefits:

For instance, income received after selling the grown green tea leaves falls in the agricultural income under the ambit of the Income Tax Act, and it is 100% tax-free, but if the tea leaves are processed further for the manufacturing of tea then only 60% of the income derived from it shall be considered as agricultural income and rest of such income shall be taxed.

Hence, the tax benefits and exemption to the producer companies totally depends on the activity carried on by it.

What are some of the examples of Producer Companies?

India has witnessed a number of producer companies, primarily in the states of Maharashtra and Madhya Pradesh. The lists of some of these companies are enumerated below.

In May 2006, the AMUL, in a major initiative, intended to modify its organizational model and proposed to transform from a co-operative society to a Producer Company. The intended transformation was aimed to exit the restrictions of the Co-operatives. The then chairman of AMUL made his views clear, stating that the state government’s permission is required for all events at present and that the producer companies have a lot more flexibility in investment, and it provides a lot more scope for expansion of business. However, this proposal was not implemented; thus, AMUL is still a co-operative society.

Producer companies are a hybrid between a Private Limited Company and a Co-operative society that combines the efficiency of the company, and it accommodates the elements of co-operative business. The creation of the Producer Companies under the Companies Act is to serve its members and work for their betterment.

Read our article: Checklist for Registration of Producer Company

The Indonesian economy has been going upward which points to the fact that the country has been...

Introduction In legal terms, Insolvency is a situation where the liabilities of a person or an...

What Does it Cost to Start and Oper...

Registering a private limited company was complex process prior to 2018. in 2018 after RUN form...