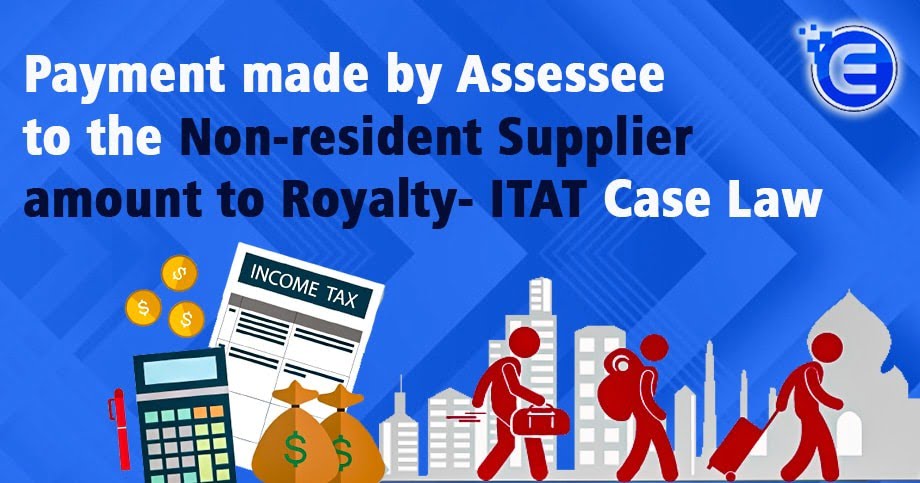 The Income Tax Appellate Tribunal, Ahmedabad bench, has held that the payment by the assessee to a non-resident supplier shall amount to royalty. The bench further held that the assessee should deduct TDS under the Income Tax Act as provided u/s 195. In this article, we shall have a close look at this ITAT case law and the Tribunal’s observations, but before we proceed, let’s have a brief understanding of ITAT.

In this ITAT case law,an appeal was filed before the Income Tax Appellate Tribunal by the assessee opposing the Order of the CIT (Appeals).

The assessee is a company that is engaged in the work of gathering market research data. It also conducts surveys and interviews in different nations based on the project specifications given by its clients. In consideration, it obtains payment on the basis of cost per interview. In order to prepare the survey design and questionnaire, the assessee logs into the web portal of a Netherlands-based company and uses its survey link for the purpose.

The assessee company levies charges from its customer for the survey data and the payments are made by the assessee of Rs. 7,24,268 in 6 instalments to the web portal of a Netherland-based company.

Therefore, the assessee had failed to withhold the tax before paying to the Netherlands-based Company. The assessing officer held that according to Article 12(5) of the India-Netherlands DTAA , the payment of consideration for the services provided by the Netherlands based Company falls within the meaning of the fees for included services and therefore, the assessee should have deducted tax.

Feeling aggrieved by this order, the assessee approached the commissioner of income tax (appeals).

The assessee was called upon to explain why the ratio of the judgment made by the Hon’ble Madras HC in the matter of Verizon Communications Singapore Pte. Ltd. vs ITO, where the remittance made by the Indian customers to the taxpayer to provide bandwidth or telecom services through international private lease circuit is taxable as royalty. The Court held that such payment amount to royalty under the Indian Tax Laws and the DTAA between India and Singapore.

The Court had also observed that the post-introduction of explanation 5, Section 9 (1) (vi) of the Income Tax Act, the scope and definition of Royalty under the Act has expanded. Further, the assessee could not show any decision on record of any other Court after the judgment of the Madras High Court after considering the post-amendment by Finance Act 2012[1] and the introduction of Explanation 5, Section 9(1)(vi) of the IT Act.

In view of this, the Commissioner of Income Tax (Appeals) dismissed the appeal.

For a better understanding of the instant ITAT case law, Section 9(1)(vi) with Explanation 5 is given below-

Section 9 (1) states the type of income deemed to accrue or arise in India.

Explanation 5- It clarifies that the royalty shall include consideration in respect of any right, property, or information whether or not-

The counsel appearing for the Revenue stated that the services provided by the assessee are in the nature of royalty. It was further submitted that it is liable to deduct TDS on payment/remittance made to the Netherlands-based company under section 195 of the IT act

It was stated that the assessing officer is correct in levying short tax deductions under section 201(1) and charging interest u/s 201(1A) of the Act from the assessee.

This addition was sustained by the Commissioner of Income Tax (Appeals) after the Judgment of the Hon’ble Madras HC in the matter of Verizon Communications Singapore Pte. Ltd. vs ITO, wherein Explanation 5, Section 9(1)(vi) of the Act was considered elaborately.

The counsel for the revenue submitted that it is a settled principle of law by different High Courts and the payment made by the assessee to the Netherlands-based Company is like royalty and hence liable to deduct tax at source under the IT Act.

It was observed that the decision upheld by the CIT(A) in the instant case did not require any interference, and therefore, the addition made by the assessing officer is to be sustained, and the appeal is dismissed.

The Tribunal, after perusing the records, noted that the Commissioner of Income Tax (Appeals) had considered Madras High Court in the aforesaid case of Verizon Communications Singapore, which is considered as the amended provisions of Section 9(1)(vi) of the Act with Explanation 5, provides an expansive meaning to the term Royalty.

The Tribunal held that the findings of the lower authority did not require any interference. The Tribunal further noted that no contra judgments were placed before it on the post-introduction of Explanation 5, Section 9(1)(iv) of the Income Tax Act, enlarging the scope of the definition of the term Royalty.

Therefore, Tribunal rejected the grounds raised by the assessee, and the instant appeal came to be dismissed.

In this ITAT case law, the Income Tax Appellate Tribunal’s bench,featuring a judicial member and an accountant member, observed that the inception of Explanation 5 of Section 9(1)(iv) of the IT Act had enlarged the definition of “Royalty”. The bench agreed with the findings of the lower authorities and held that the remittance made by the assessee to the non-resident supplier should amount to royalty.

Read our Article: How to File an Income Tax Appeal with ITAT?

Section 269SU under the Income Tax Act was introduced with a view to promote cashless economy a...