Old vs. New Tax Rates – Whether a taxpayer should choose the new tax regime for FY 2020-21? 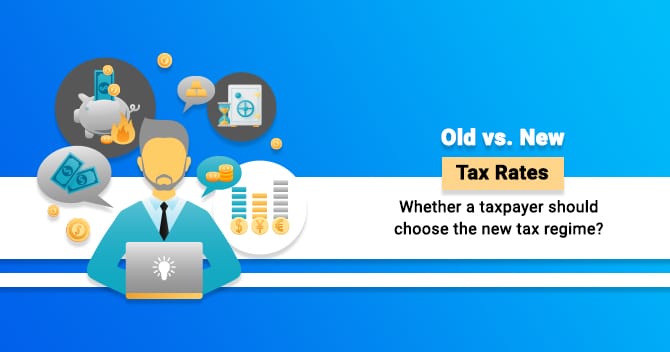 A new and simplified income tax regime was proclaimed by the Ministry of Finance on 1st February 2020. The Finance Minister, Nirmala Sitharaman, stated in her budget speech that compliance of income tax laws by the taxpayers and administration of the same by tax officials is a burdensome process. The complexities in the existing tax structure prevail due to numerous deductions and exemptions allowable under the Income Tax Act. Therefore, the finance department came up with a new tax regime altogether, which is characterized by reduced tax rates and zero exemptions. It is worth mentioning here that the ‘new tax rates’ have been provided only as an option for taxpayers, i.e., they may choose between old and new tax rates, whichever proves to be more beneficial.

It was unfolded by government officials that 90% of the taxpayers who filed their income tax returns for the FY 2018-19 had claimed deductions of merely Rs. 2,00,000 or less. Thus, it was provided that salaried individuals opting for the new tax regime will have to forego deductions under Chapter VI-A. Few exemptions which are foregone while computing tax liability as per new tax rates are investments such as EPF, ELSS, insurance plans and payments towards fixed deposits, interest on housing loan, medical insurance premium under Section 80D, contribution to NPS, House Rent Allowance (HRA), standard deduction, leave travel concession, etc.

Persons cognizant of the pros and cons of income tax changes assert that as compared to the old scheme, the new income tax rates might put the assessees in a disadvantageous position in the long-run.

The new tax regime mainly benefits those who are not able to save their income to invest in different tax saving options and, therefore, are unable to claim the full benefit of deductions. Such assesses end up paying more tax under the old tax regime and will benefit by shifting to the new one. As a matter of fact, senior citizens and pensioners may enjoy some tax gain with the new tax rates, since they usually do not opt for different tax-deductible investments. Furthermore, non-salaried persons are likely to gain more benefits since the standard deduction of Rs. 50,000 is not applicable to them.

Tax rates under the old and new regime

*Under old tax regime, various deductions may be claimed such as:

*No deduction or exemption can be claimed by taxpayers if they opt for new income tax slab.

Our Recommendation: Income Tax Slabs: Tax Rate in India for the Financial year 2020-2021

The introduction of the new tax regime prima facie looks beneficial as it helps in saving tax of up to Rs. 78,000 (75,000 + 3,000 cess) for a taxpayer earning income of Rs. 15,00,000. However, that is the case where any deductions or exemptions availed by the taxpayer are not brought into the picture.

Although new tax rates signaling lower tax liability and minimal complications may appear to be attractive, they might result in higher tax outlays considering the overall tax exemptions/benefits foregone in the new regime. To be more precise, the comparison between old and new tax rates will have to be done on an individual-to-individual basis, and the choice would be dependent upon a particular assessee’s income composition, financial position and tax-deductible investments made.

Let us consider some examples to ascertain the tax liability of an assessee under both new and old tax regime:

*Given the set of deductions (2 lacs) under this case, any income above Rs. 15 lacs would lead to lower income tax liability under the new tax regime.

By following the new tax scheme, a salaried individual claiming Rs. 1,50,000 deduction along with Rs. 50,000 standard deduction shall stand in a better situation than before, deriving a tax gain of Rs. 15,600 if his annual income is Rs. 15 lacs. However, assuming the same quantum of deductions, the old scheme shall be beneficial for those whose total income before deductions ranges between Rs. 7,00,000 to Rs. 12,00,000.

Therefore, using some examples with common deductions and exemptions, it can be seen that a taxpayer will end up paying a lower tax in the old regime. Also, if more deductions (in addition to Section 80C and the standard deduction) are availed by an assessee, his tax liability would further reduce under the old tax regime as compared to the new tax regime.

The claim made by the finance department that taxpayers shall gain by opting for the new tax regime is questionable. It cannot be negated that new tax rates would make compliance less tedious; however, tax planners who maximized their tax deductions will probably pay more tax under the new tax regime. It is left to the taxpayers to pick the tax regime under which they would be filing their income tax returns. The new tax regime may be preferable to some cases, especially taxpayers falling under the tax bracket for the first time and those looking for hassle-free tax determination.

The Income Tax Appellate Tribunal (ITAT) is a quasi judicial authority where an affected party...

Tax Implication of ‘Income and Ex...

The most critical stage for a business is the time before its commencement. Prior to the commen...