How to File an Income Tax Appeal with ITAT? 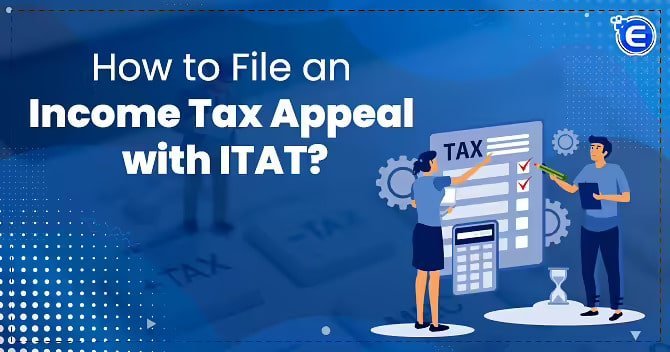 ITAT stands for Income Tax Appellate Tribunal. ITAT is a quasi-judicial body set up in January 1941 established by the Central Government for the speedy disposal of cases that specializes in dealing with the appeals related to the Direct Taxes Act. An appeal can be filed against the order of the Commissioner of Income-tax if the appellant is not satisfied with the order passed by the concerned authority. However, the Income Tax Authority can also file an appeal against an order passed by a lower authority. It stands second in the hierarchy of tax litigation in India. Further in this blog we will discuss about the Income Tax Appeal with ITAT.

What is the Jurisdiction of ITAT?

ITAT consists of the following members:

The president is appointed by the Central government, and he is a person who is a retired judge of the High court or has an experience of at least seven years as a judge of a high court.

The Vice President is appointed by the Central government, and he must have experience as a judicial member or accountant member.

He shall be a person who has been in the practice of accountancy for ten years or has been a member of the Indian Income Tax Service and has held the Additional Commissioner of Income-tax/any equivalent or higher post for at least three years.

Composition of the Benches under Income Tax Appeal before ITAT

Orders that are Appealable before the Income Tax Appellate Tribunal

The following orders can be appealed –

Fees to be paid for Income Tax Appeal with ITAT

The assessees filing an appeal before the ITAT have to pay prescribed fees. The fees depend on the demand raised by the Assessing Officer.

The time limit to file an Appeal before ITAT is 60 days from the date of the communication of the order, which is the subject matter of the appeal.

The ITAT may allow an appeal even after 60 days if satisfied that there was sufficient cause.

Forms and Signature to be verified in Income Tax Appeal

The Central Government may build a scheme for faceless proceedings before ITAT for greater efficiency, transparency and accountability to dispose of appeals BY ITAT.

To give the effect to this scheme, the Central Government may issue the notification in the official gazette that any of the provisions of this act shall not apply or, with such exception, modification and adaptation as may be specified in the notification. Such direction is to be issued before 31st March 2024.

It can be concluded that Income Tax Appeal filed before ITAT plays a huge role in the disposal of the cases related to Tax laws in India, and hence it is very important for the taxpayer to be aware of this forum and time limits to file an appeal.

Read our Article: How to manage Income Tax notices?

Saiyam Shah has done his LL.M in Business Law from Amity Institute of Advanced Legal Studies – Amity University. His area of interest is legal research related to Indirect – Tax and Company law. He has prior experience in Tax litigation, dealing with various Income – Tax Assessments and has good drafting skills in filing arguments and replying to Income – Tax Notices.

All about Assam Professional Tax Re...

Key Implications of the Taxation Bi...