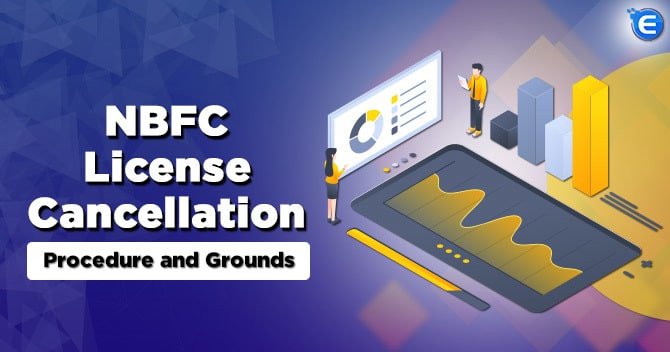 In exercise of the powers conferred upon the RBI under section 45-IA (6) of the Reserve Bank of India Act, 1934, the Certificate of Registration (COR) may be canceled by the RBI causing such Non-Banking Financial companies to be barred from taking part in the business of Non-Banking Financial Institutions.

The Reserve Bank of India is solely responsible for regulating and supervising the NBFCs to facilitate the healthy growth of the financial institutions. It has the power to issue and cancel the NBFC License. As per a data, the RBI had revoked 1701 NBFC licenses in 2019 till March 31. Apart from it, 779 NBFC license cancellation took place in the month of October and November 2018, just after the crisis in the banking sector unfolded with the IL and FS (Infrastructure Leasing and Financial Services Limited) defaulting on debt repayments. This default in payment led to a lack of liquidity for other non-banks and further triggered a crisis in the sector.

Conditions for grant of NBFC License/Certificate of Registration for NBFCs

Following are the grounds which may lead to NBFC License cancellation:

Procedure followed by the RBI for NBFC license cancellation

It is important to note that as per the provisions of Section 58 B (6) of the RBI Act provides for penalty in monetary form in case of failure or default in compliance with the requirements specified in the RBI Act, rules, regulations or directions issued thereunder. Hence, cancellation of license can’t be ordered by the RBI as a matter of first resort, especially when the law provides for other preventive measures or deterrent.

Provision of appeal against the order of NBFC license cancellation

If a company is aggrieved by the order issued by the RBI on cancellation of the certificate of registration or the license of the NBFC, then such a company can file an appeal within the time period of thirty days from the date of the order of NBFC license cancellation communicated to the company. An appeal shall be filed with the Central Government, and the decision of the Central Government where an appeal has been made to it, or of the bank where no appeal has been preferred, shall be final.

The NBFC can appeal against NBFC License Cancellation under subsection (7) of Section 45-IA of the RBI Act, 1934, to the Department of Financial Services. Such a petition must be filed within 30 days from the date of the order of cancellation of the license communicated to the company. The company may also file a writ petition for the same to the High court under article 226 of the constitution.

The Non-Banking Financial Company whose license has been canceled by the Reserve Bank of India shall stop functioning as one from the date of issuance of license/registration cancellation. Further, it shall be prohibited from performing all the regular activities and affairs with immediate effect, and it won’t be able to transact as an NBFC.

As per data compiled by the Mint, the Reserve Bank of India canceled as many as 1700 NBFCs licenses in the FY 19 for failing to meet minimum capital requirements. 779 licenses were canceled in the months of October and November alone. Comparatively, the RBI had canceled the licenses of only 26 NBFCs in FY 18. While the NBFCs were loosely regulated historically, but the situation is changing with the central bank proposing new rules in order to monitor the asset-liability and risk management framework of these entities.

In an amendment to the RBI Act in 1997, non-banks were required to have net owned funds of at least 25 lakhs, and in 1999 the central bank raised the requirement to 2 crore Rs. for new registrations while existing NBFCs were allowed conduct their business activities and were provided time to increase their net owned funds gradually. Net Owned Funds consists of paid-up equity capital, free reserves, balances in share premium account and capital reserves showing surplus arising out of sale proceeds of assets but not reserves created by the revaluation of assets.

Besides this, the RBI had canceled many NBFCs registration certificates in the year 2016 that were fraudulently impersonating as NBFCs. Many entities were found offering loans to the needy people at attractive rates and collected money from them as processing fee for loans and advances and then run away with the collected money.

Since the Sarada scam in 2015, the RBI has been on high alert and has been tightening the regulations governing the NBFCs and such other companies that provide informal banking services. In light of the uncertain credit environment, the RBI canceled close to 400 licenses in 2018 owing to shortfall in net owned funds, among other reasons. Currently, the threshold amount that must be maintained is prescribed at 2 crore Rs. from the previous minimum of 25 lakhs Rs. During this period, the NBFCs were permitted to carry on their business regardless of them not meeting the business requirements. This period could be extended to a further three years, but it must not exceed six years in aggregate. However, it could be possible only by stating the reason in writing, and such extension is completely upon the discretion of the RBI. Failure to ensure this threshold amount resulted in spurge of NBFC license cancellations.

However, in January 2019, the Madras High court made a judgment, which came as a big relief to more than 2000 NBFCs whose license was canceled owing to delay in fulfilling the shortfall. It was argued that there is a remedy that is provided against the cancellation of certificate of registration; the petitioners chose to invoke article 226 contending violations of the principle of justice. The decision was made based on two grounds; first, the law provides for an opportunity of personal hearing and that not affording this opportunity might cripple the businesses of the petitioners. Secondly, the amended section provided for sufficient time for the NBFCs to enhance their net owned funds by carrying on their business, and for these reasons, the order of RBI was interfered with. Eventually, the respondents in the case, that is, the RBI authorities, were directed to restore the certificate of registration of the petitioners and also to extend the time given to the petitioners.

The RBI challenged the aforementioned order of the court. The latest judgment by the Madras High court in April 2019 had set aside the aforementioned order of a single judge order in January 2019 and ruled in favor of the RBI. The RBI argued that there was an appeal remedy available, and the NBFCs, instead of filing writ petitions, could have approached the appellate authority. This was a landmark hearing in the NBFC case. The case stands as an indication of the firm regulatory policy of the RBI amid the environment of credit uncertainty.

As the NBFCs have become an integral part of the financial set up in the Indian economy, the RBI has become strict and tough with respect to the operations and affairs of the NBFCs. At the same time, it has streamlined the process of the NBFC by liberalizing the rules and regulations.

The term NBFC stands for Non-Banking Financial Company which is registered under the Companies...

How Can Traditional NBFC Win the Ba...