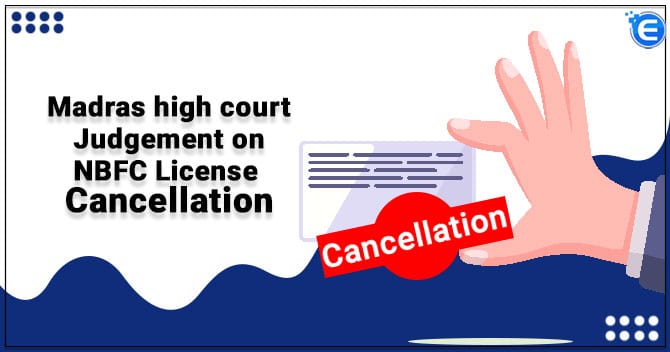 The reserve bank of India is empowered by the RBI Act to cancel the NBFC License granted to a company, the major reason could be not meeting the public interest at large. In 2018 more than 4000 NBFC License has been cancelled by the RBI due to a shortfall in NOF. In this article, we shall look at the HC judgement on NBFC license cancellation.

When the amendment act was passed, all existing NBFCs were required to maintain a minimum Net Owned Fund of 25 lakh rupees. Section 45-IA provided a period of 3 years to NBFCs to meet the requirement of having a NOF of 25 lakh, during which they can continue to carry out the NBFC business despite not meeting a mandatory licensing condition. The RBI has the authority to cancel the Certificate of Registration of an NBFC, which does not comply with the NOF requirement.

A recent Madras HC order passed on 29th Jan 2019 comes as a relief for NBFCs that are struggling to meet the NOF requirement and thereby facing cancellation of license. In the case of M/s.Nahar Finance and Leasing Limited and ors. v. The Regional Director, RBI, and ors, the HC Court has interpreted the procedure under Section 45-IA and the options which RBI must give to NBFCs when imposing enhanced requirements of NOF.

Nahar Finance and Leasing Limited and 3 other NBFCs were issued Show Cause Notices by the RBI on April 23rd 2018, proposing to cancel their certificate of registration for non-compliance with above notification. The companies filed replies to the show cause notices stating that due to changes in the economy and policies of the Government, such demonetization and implementation of GST, etc., the NBFC sector was still recovering from setbacks.

The companies asked for the extension of time till March 31, 2019, to comply with the enhanced requirement of NOF. After this, the RBI ordered cancellation of the CoR’s of all four NBFCs. These orders were sought to be quashed through the writ petitions filed by these NBFCs.

The Court quashed the orders of the Reserve Bank cancelling the CoR of NBFCs, on the following grounds:

Violation of principles of natural justice– Section 45-IA requires that before cancelling the certificate of registration, RBI should first enable the NBFCs to meet the prescribed requirements. In case the NBFCs fail to meet them, they should be given a reasonable opportunity of being heard before the CoR is cancelled, which was not done.

Violation of Section 45-IA where the statute itself prescribes time extensions to meet enhanced NOF requirement– The Court ruled that 3-year extension given to meet the NOF requirement of 25 lakh is applicable to all notifications enhancing NOF requirements.

Moreover, the RBI may extend this 3 year period by another 3 years. The RBI can give NBFCs time to meet NOF requirements till 31 March 2021. This is the maximum scope of extension, which is also subject to RBI’s discretion.

Madras High Court Judgement on NBFC License has provided an opportunity for the Restoration of NBFC License, which was cancelled because of insufficient Net Owned Fund (NOF). The Reserve Bank of India is empowered to regulate the activities of NBFCs in India. According to Section 45-IA of the RBI Act, it is necessary for the NBFCs to obtain a Certificate of Registration (CoR) from the Reserve Bank of India before it starts its operations along with this, it is also necessary for NBFCs to meet the requirement of the Net Owned Fund (NOF).

Cancellation in the PDF format.

Recovery Mechanism for NBFC is not covered under the SARFAESI Act. Though RBI[1] has strengthen...

A Complete Analysis of RBI Exposure...

Non-Banking Financial Company (Commonly abbreviated as NBFC) is a company registered under th...