Insolvency and Bankruptcy Code now covers NBFCs and other FSPs 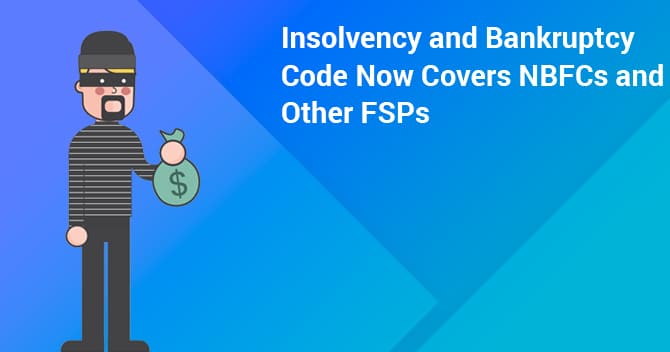 The definition of “corporate person” as provided under Section 3(7) of the Code explicitly excludes financial service providers (FSPs).

Why are NBFCs excluded from IBC?

Financial Service Providers (FSPs) include various participants, which play a crucial role and facilitate the smooth functioning of the economy.

a person engaged in the business of providing financial services in terms of authorization issued or registration granted by a financial sector regulator;

The regulators are respective regulators of that sector, such as RBI, SEBI and IRDAI etc. The rationale behind excluding Non-Banking Financial Companies (NBFCs) is that they are not “systematically critical” financial institutions and in case of financial crisis, they would not lead to a domino effect in the economy. The financial institutions with that clout are colloquially referred to as “too big to fail”. Mostly they consist of banks and mutual funds. However it is interesting to note that NBFC has not been defined in the code explicitly and as such it is to be evaluated if the concerned NBFC falls under the definition of Financial Service Providers on case to case basis depending on the business in which the entity is engaged in.

What triggered the inclusion of NBFC under IBC?

The failure of Infrastructure Leasing & Financial Services (IL&FS) and the subsequent financial crisis involving Dewan Housing Finance Limited (DHFL) acted just as a trigger to set off a liquidity crisis, at a time when the NBFC sector was already reeling under toxic levels of stress. This raised the demand to include certain financial service providers (FSPs) – such as housing finance companies and other specified NBFCs under the purview of IBC to save investors interest.

What is the legal position on NBFCs as Financial Service Providers (FSPs)?

Financial institutions that offer various banking services without holding a license of a bank are called Non-banking financial companies (NBFCs). Since these institutions, neither take deposits from the public and nor are the part of payment systems hence they can be kept outside the scope of traditional oversight and compliance requirements concerning banking regulations.

National Company Law Appellate Tribunal (NCLAT) in a recent case of HDFC Bank Ltd. vs RHC Holding Pvt. Ltd., while dismissing the application for insolvency of RHC Holding filed by HDFC, held that NBFCs are Financial Service Providers (FSP) and hence beyond the jurisdiction of the Code. This decision reiterates the decision by the principal bench of NCLT in Randhir Thakur vs Jindal Saxena & Mayfair Capital, wherein also an application for the initiation of “Corporate Insolvency” was dismissed. The main rationale behind these being that the Respondents in these cases were Non-Deposit taking NBFCs whose main object was merely lending and in no way involved public money or any such activity which might be crucial for the smooth functioning of the economy.

However, there is an alternate view that those services which are enlisted under section 3(16) of IBC as “financial services” are the ones which are intricately linked to the money market or capital market and failure of them might trigger systemic risk in the economy. Hence the corporations engaged in inter-corporate deposits (or any other activity not falling under the umbrella of financial services) shall not be construed as Financial Service Providers (FSPs) hence excluding them from the vigour of the Insolvency and Bankruptcy Code, 2016.

Can the Central Government include FSPs under the Insolvency & Bankruptcy Code (IBS)?

After huge NBFCs, such as Dewan Housing Finance Corporation (DHFC), went stressed Government decided to open window under existing laws on insolvency to bring certain categories of financial institutions, especially those having sufficient public money involved, under the preview of IBC.

Section 227 of IBC, being enabling provision, allows the Central Government to include NBFCs (as FSP) or categories of FSPs under the IBC for insolvency and liquidation proceedings. This is done only after consultation with the financial sector regulators and by passing a notification in this regard. The provision being overriding in its nature, gives extensive power to Central Government in order to allow insolvency of FSPs for limited purpose.

However the challenge is that certain class of financial institutions such as HFCs, brokerages, non-systemic important NBFCs can only be included under the code and not ‘systematically critical’ institutions such as banks and mutual funds as it might trigger negative sentiments in the market.

Regulators’ concern on NBFCs falling under Insolvency and Bankruptcy Code

Initiation of insolvency proceeding against strong NBFCs may have a spiraling effect in the sector causing panic consecutively putting huge or even serious risk on depositors and investors money parked in these NBFCs. This is the exact issue which emerged in case of DHFL and IL&FS where defaults created a fear in the entire sector creating liquidity crisis since DHFL was one of the largest housing finance corporation in India that went into trouble.

What are the fresh rules under IBC for NBFCs?

Government of India recently issued fresh rules under the Insolvency and Bankruptcy Code, 2016 (IBC) that are likely to help out distressed shadow banks and housing financiers, which have been battling a liquidity crunch for a year. The ministry of corporate affairs, after addressing the central banks (regulator) concern, issued a notification on 18th November, 2019 specifying the categories of financial service providers (FSPs) against whom corporate insolvency can be filed for under the Insolvency and Bankruptcy Code. It also clarified that NBFCs, or classes of such entities, will be covered by a special window under the bankruptcy code, which will be notified from time to time.

The Insolvency and Bankruptcy (Insolvency and Liquidation Proceedings of Financial Service Providers and Application to Adjudicating Authority) Rules, 2019 was notified to resolve severe liquidity crisis of NBFCs and to create overall stability in the financial sector.

Financial Service Providers were kept out of the purview of the Code in order to avoid failure of the economy which seems very probable if there is an increase in the number of failing FSPs. However when we consider that only a small percentage of NBFCs are allowed to accept deposits, such exclusion does not seem to serve any real purpose. On the contrary, those NBFCs which do not fall under the definition of FSP as per the Code seem to be automatically well guarded against any kind of insolvency provisions thereby serving them undue leeway. Owing to this systemic gap, the government might in the near future introduce a separate framework dealing with insolvency of financial service providers in a more nuanced and comprehensive way.

Vikalp is NLU graduate from Patiala (Punjab) and has a Diploma in Entrepreneurship Administration and Business Laws from NUJS, Kolkata. He specializes in Corporate Law, IPR and has fair share of litigation practice under his belt. Other facets of him are voracious reader, health freak and avid traveler. To him content writing comes naturally in effort to simplify the law for general public/reader.

On 23rd February 2018, The Reserve Bank of India announced an ombudsman scheme for the purpose...

NBFC Registration Procedure with Re...

In today's topic, we will cover end to end procedure to Register NBFC Online with RBI. NBFC is...