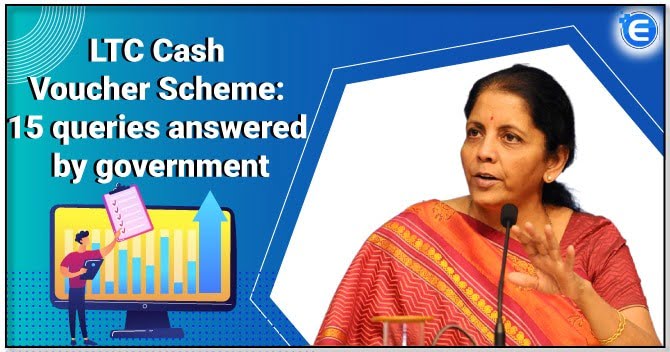 As part of an incentive package to boost up consumption in an economy that is struck hard by the coronavirus pandemic, the government proclaimed an LTC cash voucher scheme for its employees. By choosing this scheme, the union government employees can buy goods and services instead of the tax-exempt portion of the Leave Travel Allowance/Leave Travel Concession (LTC/LTA). Through this scheme, the Central Government employees can opt for the exemption of tax on the travel fare that can be encashed if the total amount is spent by satisfying specified conditions.

To clear all the queries of employees who want to opt for the LTC Cash Voucher Scheme, the central government has released fifteen FAQs with respect to this scheme. The FAQ answers all the queries regarding whether purchases from e-commerce websites are allowed, the number of transactions, and what services are qualified under the scheme.

The following are the FAQs by the ministry of finance concerning the Scheme of LTC Cash Voucher:

Q- Whether an employee is required to take leave to obtain the benefit of this LTC Cash Voucher Scheme? Whether a person is obligatory to undertake any travel?

Answer – An employee might not need to take leave for this reason nor undertake any travel. This is a scheme instead of LTC travel.

Q- In any particular case where the LTC which is destined to be utilised for the LTC cash voucher scheme has been partly utilized by either, a family member of the individual or self, and also whether this cash voucher scheme is accessible and to what degree?

Answer – This scheme of LTC cash voucher is pertinent to the LTC fare which is not utilized during the block year as declared in the office memorandum dated 12th November 2020.

Answer – An employee can avail of the cash voucher scheme utilizing the pertinent LTC fare without leave encashment. The expenses should be in accord with the ratio as prescribed for the fare of LTC.

Q- With respect to the LTC cash voucher scheme a sum total of up to 100 percent of the leave encashment and 50 percent value of the estimated fare is to be compensated as an advance to the employee choosing for the scheme. It has also been stated that under utilization/non-utilization of advance is to be accounted for by the DDOs in accord with extant provisions concerning LTC advance. If any person spends only the advance amount and makes assert, how this claim will be synchronized?

Answer – If as per the computation recommended in office memorandum No. 12(2) / 2020- E. II A dated 12th October, 2020, the reimbursable sum is less than the advance drawn; this would be dealt with as non utilization. However, after calculation of the claim, the amount of balance, if any may be recovered from an individual.

Q- All the government employees who have recently joined the office are permitted for three leaves for the hometowns and one anywhere in India in a block of 4 years. How this will be regulated?

Answer – An employee might utilize any one of the LTC accessible in a block year.

Q- As per special of LTC cash voucher scheme, an employee no matter what his eligibility is, he can travel by Air to places like J&K, Andaman & Nicobar and North East under anywhere in prescribed fare in India. In this case what will be the estimated fare?

Answer – The estimated fare has been calculated based on the basic eligibility of a person and the special packages would not be pertinent for this scheme.

Q- If the single bill of purchase of goods or services is sufficient to be submitted or the multiple bills can be submitted?

Answer – All the multiple bills are being accepted. The procurement should have been done from the issue date of the memorandum of the office till the end of the financial year. The purchase bill should carry a GST rate of 12% and above and reimbursement should have been made to online mode.

Q- Whether there is any approved format appropriate for this LTC Cash voucher scheme?

Answer – There is no single prescribed format for this scheme. A simple submission conveying the aspiration of the employee for availing the cash voucher scheme if the advance is mandatory for the purpose of same is to be declared

Q- What are the items which will qualify for reimbursement under this LTC cash voucher scheme?

Answer – Any services and goods which attract goods and service tax at the rate of 12% and above would succeed. The bill with GST details should be proposed and payment of the same should be made through the online mode.

Q- An employee having four family members capable for LTC and further wants to avail of this facility for less than four members. Thereafter he wants to utilize the LTC for the remaining of the member later. Is it possible?

Answer – As replied before, an employee can aim for the cash voucher scheme in partial, which is of the LTC of part of the qualified family. Since this is not an obligatory scheme, if the fare of LTC of any member of such family has not been utilized for this purpose, those affiliates of the family can avail of LTC subject to the level of instructions under the rules of LTC.

Q- An employee incurs the expenditure on or before 31/03/2021 on the basis of the invoice. Actual product or the service received in April 2021. Can this be permissible?

Answer – The settlement is based on making of an invoice with details of GST. As far as promising, the claim should be settled and made well before 31st March 2021 to keep away from any last minute rush and resulting lapse.

Answer – It is being enlightened that the bill which is being proposed for applying for the compensation under the scheme of cash vouchers that should be in the name of an employee who is willing to avail of the LTC cash voucher scheme.

Q- Can the services such as phone bills and interior decoration be included?

Answer – Any service which is having any component of GST more than the rate of 12% is acceptable.

Q – Is it permissible to do procurement from an e-commerce platform?

Answer – Purchasing from any e-commerce platform is also permitted provided the relevant bill/ details must be submitted.

By providing answers to all the queries, the government has tried to reduce the complexities related to the LTC Cash voucher Scheme. In simple words, by choosing for this scheme, union government employees can buy goods and services instead of the tax-exempt portion of the Leave Travel Allowance/Leave Travel Concession (LTC/LTA). Through this scheme, the central government employees can opt for the exemption of tax on the travel fare that can be encashed if the total amount is spent by satisfying specified conditions.

Clarifications issued by CBDT in th...

Recently, the Reserve Bank of India has decided to allow 60% higher borrowing as compared to 30...