Types of Accounts under the National Pension System 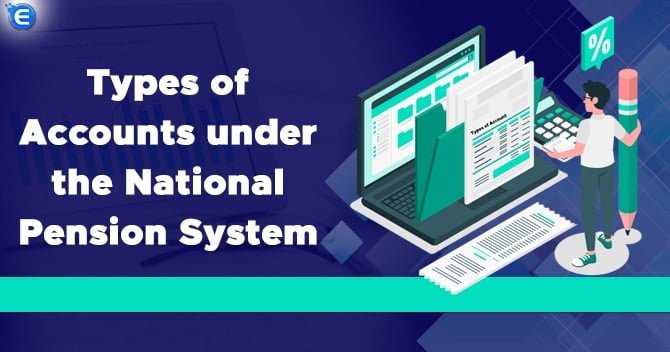 National Pension System is a government-sponsored pension scheme. It is a scheme open to all Indian citizens. NPS invests the contribution of its subscribers to different markets linked instruments like equities and debt, and the final pension amount depends upon the performance of these investments.

Any citizen of India in the age group of 18-60 years can open an NPS account. It is administered and regulated by Pension Fund Regulatory Authority of India. The NPS mature at the age of 60 but it can be extended until 70.

What are the types of Accounts under the National Pension System?

Tier I is the default and proper pension account under the NPS. It is a mandatory account under NPS where you accumulate corpus for your retirement. It is like a recurring deposit bank account. The difference between Tier I NPS account and the Recurring Deposit account is that the amount and the frequency of deposit are fixed in the RD account, but in the Tier I account, the frequency and the amount of money to be deposited is not fixed.

For government employees who have joined after Jan 2004, opening a Tier I account is mandatory. This is optional in case of non-government employees and self-employed people.  Although there is a requirement of minimum amount which one has to deposit, there is not an upper limit for deposit in tier I account though the tax benefit would be available for contributions permissible under the income tax laws.

Since a regular Systematic Investment Plan facility is not available under Tier I account, you have to set up your own SIP by investing a fixed amount every month on a fixed date.

How Tier I and Tier II National Pension System are accounts common to each other?

The similarity to both Tiers I and Tier II NPS accounts are as follows:

What are the benefits of the National Pension System?

The benefits of NPS are as follows:

In National Pension System[1], on retirement, subscribers can withdraw a part of the corpus in a lump sum and utilize the remaining corpus to buy an annuity to get a regular income after retirement.

Read our article:Atal Pension Yojana- What does the scheme comprise of?

The Government amended the Essential Commodities Act in September 2020. This amendment replaces...