Amazon and Flipkart Slammed for Not Displaying Country of Origin 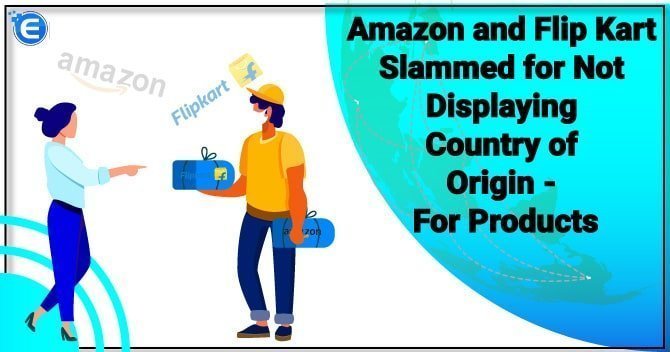 In India, Amazon and Flipkart are the biggest names in the e-commerce sector. Recently, the Indian government issued notices to these both e-commerce giants for not showcasing the obligatory displaying information such as country of product’s origin, sold on their platforms in India. This issue comes at a time when Flipkart and Amazon are hosting their largest festive sale events such as ‘FlipKart Big Billion Days sale’ and ’The Great Indian Amazon Sale‘ and are expecting an enormous surge in demand for products all over the country due to the Corona virus pandemic.

This notice is issued on 16th October, 2020 and has been issued by the Department of Consumer Affairs under the Ministry of Consumer Affairs, Food and Public Distribution[1]. The two e-commerce giants have been asked to reply to the notices issued to them and give clarification on the reasons for non-compliance within 15 days of the notice received.

Amazon and Flipkart not complying with the Legal Meteorology Act

Let us first understand what a legal metrological act is:

The Legal Metrology Act, 2009 in India, deals with the methods and units of measurement and weight in respect to the obligatory legal and technical compliances in order to make sure public guarantee from the perspective of accuracy and security of the measurements and weights.

The two companies, Amazon and Flipkart as per the notices provided to them, have “not provided the compulsory contravened and declaration” under the Legal Metrology Act.

The Legal Metrology (Packaged Commodities) Rules offer that an e-commerce organization has to make certain that the obligatory declarations (including the country of origin), except the month and year in which the commodity is packed or manufactured, “shall exhibit on the electronic and digital network used for transactions of e-commerce”.

The motive behind this notice on Amazon and Flipkart

This particular development has come in the middle of growing demand in India for the boycotting the products which are made in China after the conflict arose at the border between the two countries. Due to this, the government has started a campaign for Aatmanirbhar Bharat (self-sufficient India).

“Both e-commerce platforms and sellers will not even able to meet the terms with the country of origin information display until and unless the regime makes it compulsory to exhibit PDP (principal display panel image on the e-commerce sites,” stated by Sachin Taparia, owner and chairman of the social media engagement platform, Local Circles. Adding to that he stated that by the employees of the warehouse in awarding the product do not have the ability to appreciate and load country of origin in order but they can take a picture of PDP and further upload it.

Plea in front of Supreme court of India

Divya Jyoti Singh, the petitioner told the Hon’ble Supreme court that the course is issued to prepare a law asking all e-commerce industries who are selling goods in the Indian market, to display the ‘origin of the country’ label in such a way that it is comprehensible to consumers.

The petitioner wanted a direction to the Centre to formulate a law, which makes it compulsory for all the e-commerce companies like Snap Deal, Amazon, and Flipkart to disclose and display the Country of Origin for all produce sold in India in an appropriate size that makes it comprehensible for the consumers to read it.

The e-commerce portals secretly do not disclose the origin of the country for the products on their web-portals. It seems a great invasion of junk is made and imported from the People’s Republic of China. Indian consumers are still kept in shadow by not unveiling the Country of Origin, for if the consumers do not know the origin of products are made, they cannot stop purchasing them or to put it, in other words, let the consumers make a well-versed decision” the plea stated.

Adding on she mentioned that the entire country is standing together and united showing commitment to their motherland, as a consequence of the loss of lives of our Indian soldiers due to the India-Chinese disagreement in the Ladakh region and thus are running a nationwide campaign pertaining to the boycott of all the products made in China / mobile apps which helps China create profits in Crores.

The specialist affirms that the new regulation brought by the Union government for the sellers to show ‘country of origin’ is a gigantic challenge, and the information might not be accurate. This is an enormous task that includes gathering of the data and providing it to the e-commerce marketplaces. There are a total aggregate of over six hundred million products scheduled on just four platforms, such as Flipkart, Amazon, Snap deal and Paytm. Flipkart and Amazon work with millions of sellers, artisans, weavers, and craftsmen all over the country.

The Confederation of All India Traders (CAIT), which stands for over seventy million traders, said its battle against e-commerce companies for “spoil into malpractices” and “disobey various laws” brought consequences after the Union Government issued these mentioned notices.

This step of the Central Government shows its strong will to put these companies in order, stated by the CAIT secretary, Praveen Khandelwal. Any non compliance of Indian laws will not be endured any further, alleged by him. Furthermore, he asked the Central government to straight away examine the festive sales of both Flipkart and Amazon. Adding on, he alleged that no produce is in compliance with the requirement of the country of origin.

The dominating position of the e-commerce market in India makes the situation difficult for the Indian government to make them comply with rules and regulations. There is an urgent requirement of the regulatory body of the huge e-commerce industry. This development rose due to growing demand in India for the boycotting the products which are made in China after the conflict arose at the border between the two countries, collective with the push of the government for the Aatmanirbhar Bharat.

Read our article:License Required for Starting an E-Commerce Business

What is an Asset Management Company...

The Government amended the Essential Commodities Act in September 2020. This amendment replaces...

The much-awaited union budget 2019 has been presented by the interim finance minister Mr. Piyus...