Legal Compliances of NGO Laws in India – A complete guide 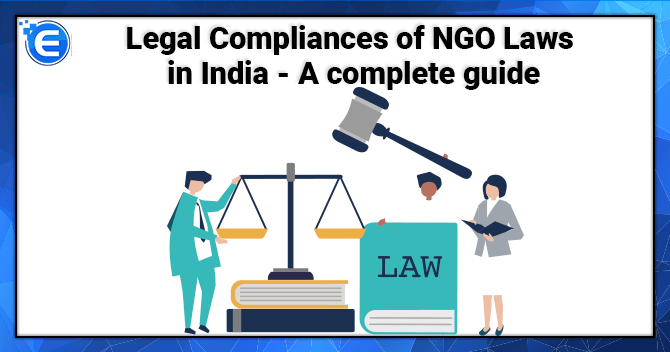 The article iterates the view of legal compliance of NGO Laws in India. NGO stands for the Non-Governmental Organization or Non-voluntary Organisation. The various forms of the non-governmental organizations are trust, society, trade union, co-operative society and section 8 companies. State and central governmental agencies gave regulatory authority over non-profit organizations. The hierarchy in states for the NGO includes Charity Commissioner (for trusts), Registrar of Societies, and Registrar of Companies under section 8 of the Companies Act, 2013[1]. The various departments and regulatory bodies for NGOs are the Income Tax Department and Ministry of Home Affairs for NGOs receiving foreign contribution.

The following laws would be applicable for NGO registration in India:

Trust- It is a public charitable institution registered under the Charity Commissioner’s office having jurisdiction over the state. Maharashtra has adopted the Bombay Public Trust Act, 1950, which has become a model for the various other states. The law that regulates trusts are the Indian Trusts Act, 1882.

Societies– According to the Societies Registration Act, 1860, states have adopted their version from the model Societies Act, 1860. A society is considered as an independent form of organization. It has broad membership, which elects a governing body periodically for managing the affairs of the society. The body is accountable to members. There are multiple types of societies that may be registered under the Act which includes:

Company– A Company has been described under the Companies Act, 2013. The Act permits “Section 8 companies” to be formed. According to the Act, Section 8 Companies are those which are formed for the purpose of art, religion, charity, and other useful objects. Internal governance of Section 8 Company is similar to that of a society. The members of the committee or governing council are elected by the members of the Charitable Company. A section 8 company can be dissolved. The registration process takes time and requires the memorandum of association and articles of association that has to be submitted with the ROC (registrar of companies).

Trade Union– According to the Trade Union Act, 1926, a Trade Union is defined as temporary or permanent combination formed to regulate and control the relations of employees and employers.

There are various legal compliances of the NGO are as follows:

The various tax deductions available under legal compliances of NGO are as follows:

It can be concluded that legal compliance of NGOs are mandatory. The NGO, such as registered as the Company has to follow the Section 8 Annual Compliance.  Section 8 companies have to follow annual compliance. Legislations like the Income Tax Act play a significant role, as it provides deductions to the donors.  The donations from foreign contributions are necessary to be registered, as foreign incomes/donations for Non-Governmental Organisations. Other registrations related to PAN and TAN are mandatory. Under the Income Tax Act, 1961 the definition of income states that ‘no income is exempt unless provided’, so donations are not always 100 % exempted.

Read our article:Difference between Civil Society and NGO: A Critical Analysis

Difference between Civil Society an...

The article will be discussing the difference between civil Society and NGO. The Civil Society...

Recently the Ministry of Home Affairs has been in news for cancelling the FCRA Registration of...

What are the Types of NGO Registrat...