ITC Transition Provisions: How Existing ITC can be transitioned Under GST? 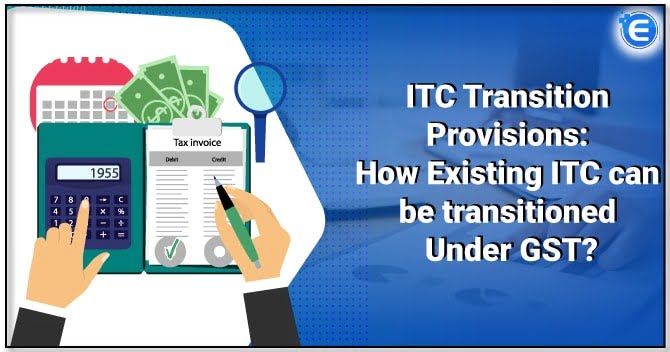 There is a lot of confusion in the mind of traders, who are dealing in services or goods about what will happen to the input credit they are eligible for under old laws. Whether it can be carried forward or will it lapse with the implementation of GST.

This article will solve all your queries about this topic. All those taxpayers opting for GST registration or are migrating to GST must know about these ITC Transition provisions under GST.

What is ITC Transition Provision?

The transition provisions are incorporated in GST to allow the existing taxpayers to migrate to GST in a transparent way.

What is Input Tax Credit?

For Taxpayers Registered Under Old Laws

Such taxpayers are eligible to receive credit equal to CENVAT credit carried forward in the return furnished by them, for the period ending immediately preceding the appointed date, i.e. 1st July 2017. However, the following conditions are required to be fulfilled:

Along with the said credit, the taxpayer can also claim any unveiled CENVAT credit in respect of capital goods not carried forward in the return furnished under the existing laws.

For Taxpayers Not Registered Under Old Laws

As per ITC Transition provisions, taxpayers who are registered under GST, who were not required to be registered any old laws, or were dealing in exempted goods can avail credit for eligible duties in respect of inputs held in stock and inputs contained in semi-finished or finished goods. However, the following conditions are required to be fulfilled:

In case if inputs are received on or after 1st July 2017 and applicable tax or duty on then is paid before such date then following condition is to be satisfied; invoice or any other duty or tax-paying document of the same was recorded in the books of account of such person within a period of thirty days from the appointed day.

Every registered person under GST, whether they were registered under any old laws or not, are entitled to take credit of input tax under section 140 and shall, within 90days of the appointed day, submit a duly signed declaration electronically in FORM GST TRAN- 1 on the common portal. The amount of Input tax credit they are entitled to should be stated in the same.

This 90 days period can be extended for a further period of 90 days by the Commissioner on the recommendation of the Council.

However, any registered person under GST availing of this scheme and has furnished the details of stock held by him, who is covered under any of the following given criteria, will have to submit a statement in FORM GST TRAN-2 at the end of the 6 consecutive tax periods during which the scheme is in operation.

A person who is:

Can also enjoy ITC of inputs in stock.

Percentage to ITC that can be transferred to GST

Information regarding ITC transition is provided in the transition rules issued by the government.

In the case of any person who is registered under any old laws can claim 100% credit if all the specified conditions are fulfilled.

In case of any person who was not registered under any old laws can claim the following percentage of the credit;

However, if such goods attract Integrated Tax @18% or more, the credit allowed under ITC Transition provisions will be 30% and 20% respectively.

Every taxpayer registered under GST who is entitled to claim the credit of input tax should submit a declaration within 90 days in Form GST TRAN-01 from the date of implementation of GST, i.e. 1st of July. This duly signed form is to be submitted electronically on the GST Common Portal. This form is required to be filed by every taxpayer whether they were registered under the old laws or not. This form requires detailed information from the taxpayer, which will include:

This form is required to be filed by every person availing new credits, for which they have no invoice or any other document. Pre-conditions to be satisfied for the same are:

This scheme can be availed for 6 taxation periods immediately following the implementation of GST. This form is required to be filed at the end of every such year during this period of six years.

To ensure proper implementation of GST in India, smooth transition provisions are prerequisites. It will assure that the ease of doing business is well-maintained. For any additional information regarding GST registration or ITC Transition provisions, please contact Enterslice.

Read our article: Simplified and New GST Returns from April 2020

Lok Sabha has finally passed the GST bill, and it is implemented from July 1, 2017. It has brou...

Impact of GST on Solar and Renewabl...

Effective GST implementation strategy is required to ensure your business is GST compliant. In...

GST on lawyers and law firms

The general goods and services tax is the new indirect taxation system which is levied on all t...