All about Intrastate and Interstate Supply under GST 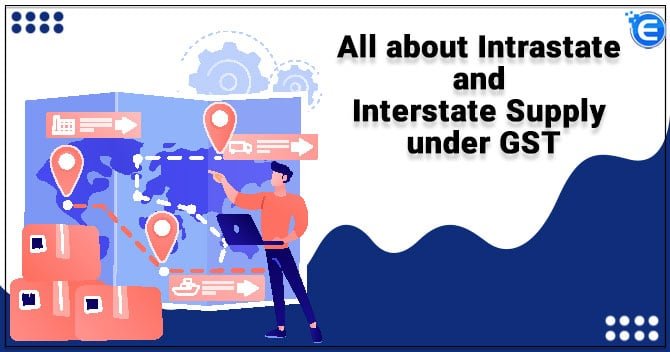 The taxation system may be quite complex for some to understand due to the numerous legal formalities that accompany it. After the introduction of GST, there are various factors that need to be understood. One of them includes intrastate and interstate supply under GST. Whether the supply of goods and services is made within the city or across the borders, the supplier or the buyer must pay the GST interstate or intrastate.

Meaning of Intrastate and Interstate Supply under GST

Main features of the Interstate Supply

There are certain prominent features of the interstate supply under GST that is mentioned below:

Main features of the Intrastate Supply

The main features of the intrastate supply under GST are mentioned below:

Tax implication on the interstate and intrastate supply

It is worth mentioning here that the Goods and Services Tax has replaced taxes like:

Here the first four taxes were previously levied by the Centre, and others were levied and collected by the state.

According to the current GST law, taxes are levied on goods and services based on the place of supply. In case the transactions fall under Intrastate supply of goods or services, central GST or CGST is levied by the Centre, and SGST or State GST is levied by the state where supply has taken place.

In case of interstate supply of goods and services, IGST or integrated GST is collected by centre. In this scenario, no CGST or SGST is charged. The rate of IGST shall be equal to the rate of CGST plus SGST.

To understand the dynamics of IGST, CGST, SGST, we need to understand the meaning of intrastate and interstate supply under GST. As a business professional, one should be aware of these significant factors relating to the GST.

Read our article: Difference between GST Interstate and Intrastate Supply

For certain businesses, obtaining registration under GST is mandatory. If the entity carries on...