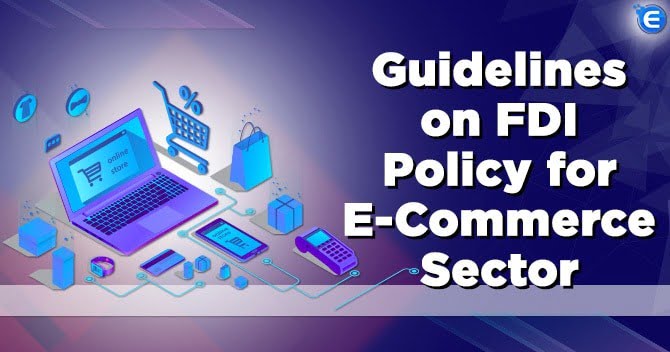 Development of E-Commerce Activities in India

According to the Global Development Index (GDI), India is ranked as one of the largest sectors for online retail markets and e-commerce activities. Factors that affect this are constant urbanization, digitization, large population, and the ability for growth. In retail trading, the e-commerce sector has witnessed phenomenal growth in the past decade. Due to this, foreign companies and governments are willing to invest more in India. The E-commerce sector contributes to about 10% of the gross domestic product (GDP) and generates about 8% of the employment of the country.

With the above developments, the government has strived to bring out an FDI policy for e-commerce sector, which would balance the interests among traditional market players and e-commerce giants.

The following are the routes for foreign direct investment:

Since 2000, the Government of India was trying to bring a law on foreign direct investment for the E-commerce sector. Foreign direct investment (FDI policy for E-Commerce Sector) is a debatable issue as the livelihoods of many individuals depend on the domestic supply of goods. Traditional players such as small-time shops, mini retailers, and big retailers would depend on running their shops for selling products.

However, due to India’s progression and development, the government has introduced various policies that would benefit both sides of the market.

This notification was an eye-opener for foreign direct investment in India. This initiative was gladly welcome with open arms by e-commerce companies that were beginning a business in India.

The features of the 2000 press note notification on FDI are as follows:

This press note brought about various retaliations from various organizations. The opposition was brought out by unions such as Swadeshi Jagran Man, which supported retailers and other associations. Apart from this, the opposition was brought by foreign governments regarding the move by the government. Communities brought protests as the national interests of the country were affected. Some market participants hailed the outcome of this deal as it supported an increase in market participation for domestic firms.

Many companies came up to voice their opinion about the previous policy. This opinion was given to the Foreign Investment Promotion Board (FIPB). Some companies claimed exemption from the 26% divestment.

Due to opposition, the government was forced to remove the criteria for divestment from the FDI policy for E-Commerce in 2000. This was removed by the government in the press note 2006 series.

The Features of FDI policy for E-commerce 2012 press note series are as follows:

In 2015, Mrs. Nirmala Sitharaman, along with several e-commerce companies, FICCI and Confederation of Indian Industry (CII), discussed the outcome of the above policy. The minister considered if the above policy was amended, then it would be a severe detriment to domestic retailers as their economic livelihood depends on business activities. However, due to pressure, a consensus was reached between the government and the market participants.

According to the above press note, an Indian company or Indian manufacture could sell retail products online under the SBRP. However, 70% of the goods have to be manufactured in-house, and 30% of the value of the goods has to be sourced from Indian entities. Only FDI for SBRT was allowed under this FDI policy for e-commerce. Proposals for introducing FDI for MBRT were not allowed by the government.

Due to this, the Government of India expanded the definition of E-commerce activities in the 2016 press note. This new regulation allowed e-commerce businesses to provide support services to consumers. However, companies were not allowed to exercise any form of ownership or influence the price at which the goods were sold.

These guidelines were a boon to traditional retailers in the market. However, this regulation did not provide a concrete meaning to a single vendor system.  Single vendor restrictions were not imposed on domestic e-commerce companies such as reliance.

Confederation of all India Traders (CAIT[1]) also mentioned that global e-commerce retailers would come up with a solution to circumvent the regulations and comply with the FDI rules. In a comment made by the CAIT, the restrictions applicable to MBRT would also be circumvented by e-commerce companies.

In this press note, the DPIIT introduced a major change to the current FDI policy. This was intending to balance the interests between small traders and foreign investors.

The following are the features of the 2018 press note on FDI:

Though this press note strived to maintain the balance of interest between the traditional players and modern e-commerce companies, issues still arose.

The DPITT gave clarity in 2019 that e-commerce could not evade the rules. The policies which were adopted have to be followed by different e-commerce players.

In 2019, the Union Government approved another press note series that regulated the operation of SBRT.

The following features were considered in this press note series:

Previously, under the SBRT system, companies had to set up shops and physical stores first and then open online e-commerce business. This would create a disparity in the number of goods and services offered by the shop regularly.

2016 press note allowed FDI for SBRT. After discussions in 2019, online e-commerce was allowed for SBRT. However, the company would have to open a physical store for two years. From the above amendments, the Government of India has tried to balance traditional players’ interests and foreign players.

Also, read: FEMA Compliance on Export of Goods and Services

An Establishment of Branch Office (...

India has been a hotspot for foreign companies in India. With the fast-growing economy and incr...

FEMA Compliance on Export of Goods...

Export can be understood as a process in which goods are sent outside India. Modes of transport...