What is meant by FDI Approval Route in India? 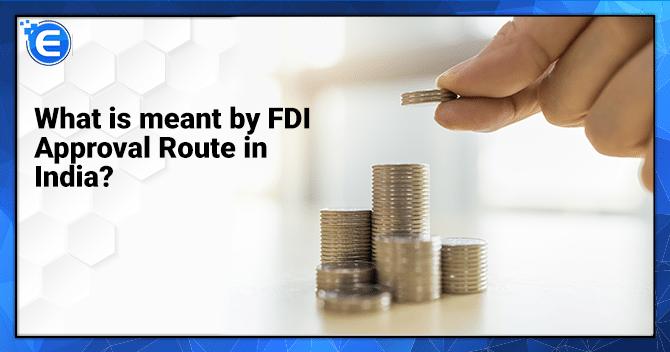 The investment by foreign entities has significantly improved in the last few years in India. This improvement could be attributed to the ease in FDI norms in the different sectors of the economy. On the one hand, India has taken giant strides in reaching the top 100 club on the ease of doing business, and on the other hand, India received a record FDI of 61.96 billion dollars in 2017-18, which rose to 6% in the subsequent year period. The investment climate has seen considerable improvement since 1991, the opening up of the Indian economy. This article describes the FDI Approval Route.

In such a scenario, every other foreign entity wants to enter into India. These foreign entities might have a lot of queries with respect to the regulatory approvals or ways and strategies of entering into India. Investments made in India are categorized under two routes- a) Automatic route b) Government/Approval route. This article attempts to throw light on the FDI approval route in India, but before that, let’s have a brief overview of FDI.

When a company develops a controlling ownership in a business entity in another country, it’s called the Foreign Direct Investment. The foreign companies, with FDI, have a direct involvement in the daily business of another country. Generally, FDI takes place when an investor either acquires foreign business assets in a foreign company or establishes foreign business operations. FDI is a vital aspect of the economy of a country. A lot depends on the host country’s government policies and a robust business environment, which, if properly implemented, can facilitate the economy of the country. There are many other positive impacts of FDI.

Routes for FDI in India

FDI under the Automatic route is where the foreign investor or the Indian company does not need to take any approval from the Government of India before making an investment, whereas under the FDI approval route, also called the Government route, a prior permission must be taken from the Government. Until the year 2017, the Foreign Investment Promotion Board was a nodal agency for processing FDI applications for the FDI approval route. In May 2017, however, an office memorandum was issued, and that abolished Foreign Investment Promotion Board, thereby giving authority to the concerned departments. The relevant Department is required to make a decision in consonance with the DIPP.

There are sectors where FDI is prohibited through both Automatic Route and Government Route. These sectors have been preserved in order to protect the interests of the economy. The prohibited sectors include Lottery business, gambling and betting, Nidhi Company, Chit funds, Real estate businesses, Trading in Transferable Development Rights, Manufacture of cigars, cigarettes or tobacco products, activities that are not open to private sector investment like atomic energy, etc.

The name of the sector and the Department or the competent authority from whom the approval must be taken under the FDI approval route is mentioned in the table provided below.

The FDI policy has gone through numerous changes. In certain sectors, it requires prior approval of the Government, and some don’t, whereas some sectors are prohibited from FDI. In the table made beneath, we discuss the sectors and their FDI limit under the FDI Approval route.

The Government has tried to make the procedure for government approval less complicated and expeditious by providing the online facility for filing such application and by fixing the time period for processing of the proposal.

The standard procedure is as follows:

An Indian company subject to the prescribed FDI caps, sectoral regulations, and licensing requirements applicable to different sectors or activities may issue capital instruments to persons residing outside India without taking any prior approval from the Indian Government for the investment. Sector-wise list wherein automatic entry is allowed can be referred to. Some of these include the Plantation sector, thermal power, Roads and Highways, Tourism and Hospitality, Gems and Jewellery, Electronic systems.

Under the FDI Approval route, prior approval is required from the Government of India before making an investment. Proposals for foreign investments through the approval route or the Government route are considered by the respective Administrative Ministry or Department. The company in which the foreign investment is proposed shall make an application on the Foreign Investment Facilitation Portal[1] for approval. The approval may be granted at the discretion of the concerned ministry or department as the case may be. Ordinarily, the concerned ministry or the Department in approving an investment proposal considers the following matters:

FDI brings a lot of benefits to a country’s economy. It brings in new technologies and skills. It generates more employment and creates a more competitive business environment. However, it all depends on a country’s FDI policy as to how it would shape up in the future. It also relies on the fact that what shall be the FDI routes (FDI Automatic Route or FDI Approval Route) for foreign investments and which sectors are prohibited. The regulatory framework also plays a vital role in this regard. To sum it up, the policies formulated by the Government is a critical driver for the overall growth of its economy.

An Overview of Annual Performance R...