All you need to know about Foreign Investment 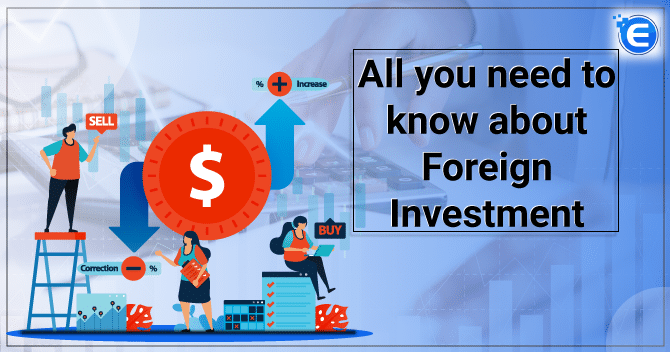 What are the routes for receiving foreign investment in India?

Different countries have various patterns of receiving FI. In India, FI is received through routes. The Government has specifically made these routes of India in consultation with the RBI.

The following are the routes for foreign investment in India:

What are Capital Instruments?

Apart from this, any form of preference shares which are considered optionally convertible or partially convertible and if these shares have been issued up to 30 April 2007, then the same will be allowed to be compliant with the rules of FI.

How is Foreign Exchange Law regulated for Foreign Investment in India?

Under the FEMA, foreign investment in India was promoted rather than restricted. With the introduction of FEMA, the government brought out laws and regulations for NBFCs, Foreign Direct Investment, and Foreign Portfolio Investment. Even for the transfer of security to an individual outside India, there is a regulation. This regulation is the Foreign Exchange Management (Transfer or Issue of Security to a Person outside India) Regulations, 2017.

What is the difference between foreign investment, foreign direct investment and foreign portfolio investment?

Foreign direct investment is made through the following for FDI:

To be applicable for investing in foreign portfolio investment, the following conditions have to be satisfied:

For issuing securities to the public, the company has to be registered with a stock exchange. Hence, foreign portfolio investment would only comprise listed companies which can raise investment from a foreign company.

Valuation of instruments means assessing the fair market value of a particular instrument based on internationally accepted standards.  For example, securities which are freely transferable between companies can be independently valued. Similarly, valuation occurs when securities are transferred from an Indian company to a resident outside India.

A valuation can also occur when there is a buyback of securities or redemption of preference shares by the company. Valuation has to be carried out by the company following certain international standards of valuation.

The following would be applicable to valuation for securities which are issued by an Indian company to a non-resident Indian or a person resident outside India:

For an unlisted company, the following principles and guidelines of valuation would be applicable to the securities or capital instruments:

A foreign investor has to be clear on which instruments an FI can be made. FI can be made on capital instruments which are regulated by the RBI. These instruments will include equity shares, preference shares, debentures and share warrants. There are different modes of making foreign investment. Any form of investment which requires prior approval from the government is known as the approval route and any investment which does not require approval comes under the purview of the automatic route. FI, FDI and FPI have to be differentiated from each other before an investor is making an investment. The valuation principles have to be considered and followed while investing in capital instruments.

The FDI policy in India indicates the decisive factors which allow foreign investment in India....

What are the types of Foreign Direc...

FDI or Foreign Direct Investments is one of the most vital sources of direct investments in cou...