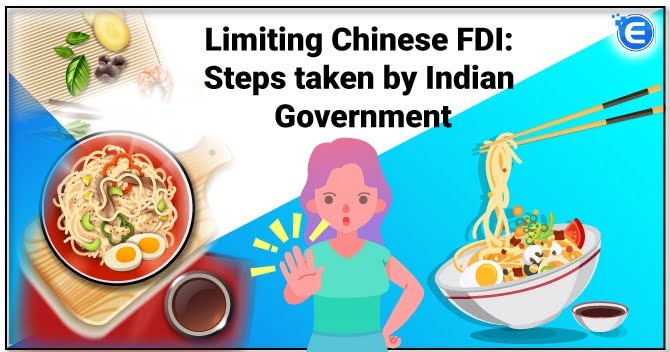 The Indian Government amended their FDI policy in April 2020 with a view of limiting Chinese FDI. As per the amended policy, FDI from neighbouring countries would require prior approval from the government. There are two routes of FDI in India.

The following are the routes of FDI in India:

Under this amendment there were seven countries listed that shared land borders with India. China was also under the list. Another amendment is the requirement of the beneficial owner or an individual that controls significant investment in the entity.

What was the percentage set for beneficial ownership for limiting Chinese Investment?

Through this amendment, the government notified that any investment coming from neighbouring countries that share land borders with India would be limited to the following:

Hence if a Chinese company has major controlling interest in a particular company, then the principle of beneficial ownership is taken.

How will investments from Singapore, Hong Kong and Mauritius be Treated?

For Limiting Chinese FDI the government has taken significant steps. First and foremost, changing the requirement of compliance of FDI for neighbouring countries was one significant step. Though this decision was welcome by different individuals, critics considered that this step would hinder any form of investment activity. For limiting Chinese FDI, the government has also brought out the beneficial ownership principle, where direct and indirect control mechanisms are looked into.

Due to this Chinese companies that are present in Singapore, Hong Kong and Mauritius would come under the scrutiny of the Government of India, if the investment activity is routed by a Chinese Controlled company.

If we apply the definitions of beneficial ownership, then 10% under the Companies Act 2013 and 25% under the principles of the Money Laundering Act would be applicable to companies present in other countries.

Is the government going to reduce the percentage for limiting Chinese FDI?

In a view of limiting Chinese FDI, the government brought out the FDI policy[1] amendment in April 2020. After this the government in September banned more than 224 Chinese applications. Companies such as Tencent and Alibaba were affected due to this.

The government with a view of limiting Chinese FDI has brought out amendments in the FDI policy. As per the amendments, any country that shares land borders with India would require prior approval from the government for any form of investment. Apart from this, the requirement of beneficial ownership was also considered under this amendment. Now the government may reduce the criteria of beneficial ownership. This would be reduced below 10 % and 25 % under respective corporate laws. Any change in this would affect legislations such as the Companies Act, 2013 and Foreign Exchange Management Act, 1999.

Read our article:Chinese Investment in India under the Government Approval

Amidst the Covid-19 pandemic, the Government of India has brought out different forms of measur...

This article throws light on the concept of the FDI under Single Brand Retail Regime, where an...