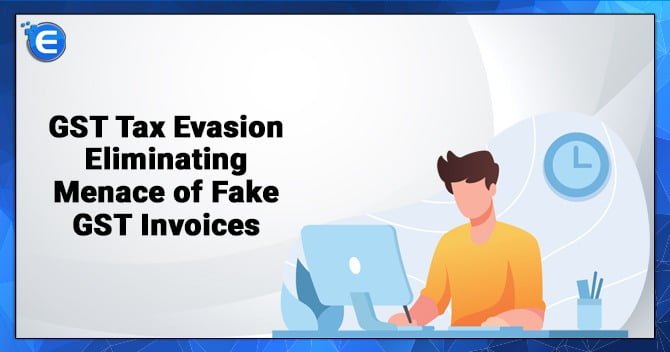 In the past, it has been observed that some fraudulent activities are carried out by individuals in making fake GST invoices to claim wrong input tax credit by GST taxpayers. There have been instances where taxpayers obtained fake invoices to reduce their output GST liability by claiming credit based on fake bills. In this article, we shall look at these fraudulent practices that has intensified and how this menace is sought to be eliminated.

What is meant by Fake GST invoices?

Fake GST invoice or fake bills is when an individual issues invoicing charging GST on it without the GST number mentioned on it, resulting in a fake invoice. Every registered business is required to issue invoice containing a valid GSTIN. In case any crucial information from a typical GST invoice is missing, it is said to be a fake invoice.

Further, another instance of this is seen when individuals that are not registered under GST uses a fake GSTIN number in the invoice and charges GST, and the tax is not deposited with the government. GSTIN is a 15 digit unique code where the first two digits represent the state code, and the next PAN number and the last three numbers denote entity number. Any change in this set will be said to be fake GSTIN number and, therefore a fake invoice.

It has been observed that the fake invoices are issued by a racket of individuals who are illiterate and not carrying on any business or any other profession.  Generally, fake invoices are frauds done by the non-existent taxpayers and by using a network of firms set up to illegally obtain ITC.

What is the purpose behind issuing Fake GST Invoices?

The main purpose behind this includes:

The following measures have been taken:

What are the penal provisions for fake invoicing under GST?

Despite the lawmakers looking to cover every fraudulent transaction resulting in GST tax evasion, it has been observed that various new methods have been adopted to avoid tax payment through fake GST invoices.

Therefore amendments have been made to the penal provisions of Sections 122 and 132 of the CGST Act. Further, Section 271 AAD has been introduced in Income Tax Act[1] as applicable from 1st of April 2020. Below we shall look at these changes.

Amendment in penal provisions of Section 122 of CGST Act

It is provided that any person who retains the benefit of transactions stated below and at whose instance such transaction is made shall also be liable to penalty of a sum that is equal to tax evaded or input tax credit availed of or passed on.

Amendment in provisions of Section 132 of CGST Act

Before the amendment was introduced, only the person who committed the offence was liable for punishment but now whoever commits, causes to commit, and also retains the benefits arising out of the offense is liable to be punished.

Shall be punished leading to imprisonment.

Subsequently, an amendment has also been made from 1st April 2020 under the Income Tax Act by inserting Section 271 AAD. In this penalty would be imposed on the person maintaining books of accounts in case of false entry or omission of an entry that is needed for calculating total income.

Offences with regard to fake GST invoices is a cognizable offence and non-bailable in nature where the amount of tax evaded or input tax credit availed wrongly or used or refund taken wrongly exceeds 5 crore. Therefore stringent measures have been employed by the government however, the government should ensure that genuine taxpayers are not harassed because of such provisions as the need for these penalties are meant for fraudsters.

Power of Inspection, Search, and Se...

GST has been incorporated with a view to provide a simple and streamlined tax flow structure. T...

Is There any GST Dispute Resolution Mechanism under GST Appeals in India? GST Appeals An appeal...