Amendments in GST Rule – with effect from January 1, 2021 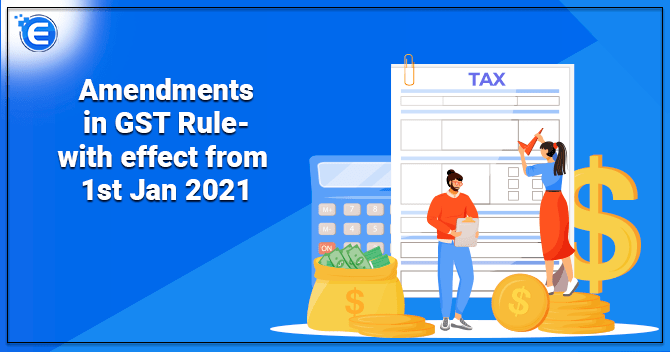 The changes are introduced in the GST Act. The changes have come in the light of increasing bogus and fake GST bills made by the business houses. The fake invoices and counterfeit firms have resulted in the arrest of the individuals. CBIC has issued a couple of notifications relating to the CGST 2017 and CGST Rules, 2017[1], which are applicable from January 1 2021. In this article, we are describing, GST Amendment rule with effect from January 1.

This amendment is good news for the small and medium-size business players.

The scheme is available to the Taxpayer whose aggregate turnover is 5 Crores in the last preceding financial year. There was the filing of GST-3B return by October 2020 by November 30.

The officer can cancel/suspend the GSTIN without giving the opportunity of being heard to the Taxpayer when he has exceeded his authority to take input tax credit under Section 16. A clause (e) has been inserted in Rule 21 of the CGST Rules, 2017, where the tax officer has the reason to believe that the registration of the person is liable to be cancelled.

The GSTIN has been suspended under Section 54 of the CGST Act 2017, no tax refund can be availed by the tax payer. Meanwhile the tax refund proceedings must be imitated for applying the rebate in the court.

A new rule has been added from January 1, 2021; a restriction has been placed on the utilizing of the 99% of the tax liability from the ITC-Input Tax Credit, where the value of the taxable supplies have been other than the exempt supply and zero-rated supply it exceeds 50 lakhs rupees in a month.

The Taxpayer has failed to file the two subsequent GSTR-3B, for the two succeeding months, his GSTR 1 shall be blocked.

The department has the authority under the new GST Amendment to cancel the GSTIN- when the liability declared in GST R3B is less than in the GSTR1 in that particular month.

The E-Way bill is permitted up to the distance of 200Km. This implies that two day validity is given to the e-way bill up to 200kms.

The e-way bill cannot be generated for the periods when the tax return has not been submitted for the two consecutive periods.

According to this amendment, a new category of services or supplies has been added, for which tax invoice shall be issued, in such time and such manner as may be prescribed.

According to the Rule, 8(4A) has been substituted with the new rule that, every GST registration shall be accompanied with the Aadhar Card, or the biometric information needs to be submitted along with the photograph and the know your customer –KYC, if Aadhar has been failed to be submitted.

The time limit for the GST Registration has been changed from 7 to 3 working days, from application submission date.

This means that there will not be any late fees in delay in furnishing the GSTR-4 for the F/Y-2019 -2020 till December 31 for the composite dealers located in the Ladakh Union Territory.

It can be well said that these GST Amendments are a way to stop the tax leakages in the economy. The GST amendments about the registration and cancellation and restrictions on the GSTR1 filing of return has been done to prevent tax evasions.

The benefits of these GST Amendments are more in terms of reducing the tax burden on the small scale taxpayers. The compliance burden was overall increased with GST. Keeping a check on the Input Tax Credit and Invoice Filing Facility are the new features of this GST Amendment. This helps in keeping track of monthly taxes by pre-filled challan and cash ledger. The overall GST Amendment is to increase the tax payments and reduce tax evasions from the systems.

Read our article:Recent Amendment under GST in Debit Note and Credit Note

The Central Board of Indirect Taxes and Customs further extended the deadline for GSTR-3B in it...

All you need to know about Form GST...

What are the Demerits of GST?

GST is expected to be a great tax reforms in the Indian taxation system however, for a country...