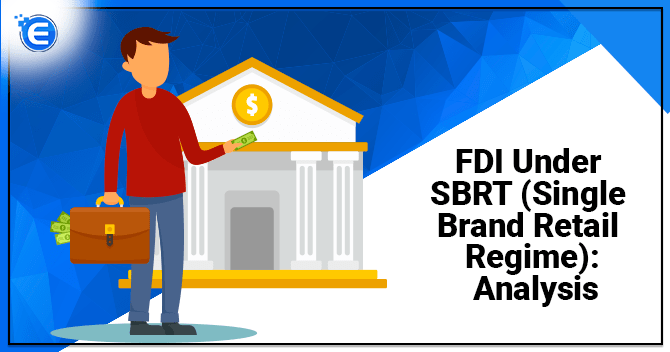 This article throws light on the concept of the FDI under Single Brand Retail Regime, where an analysis of the new FDI policy has been discussed. This is regulated under the approval route of Foreign Direct Investment under approval route and automatic route.

The amendment has been brought by the Central Government where the cabinet approved the amendments to liberalise the Single Brand Retail Regime. Where the notification issued by the DPIIIT Press Note 1 in 2018, where the amendment was effectuated the change in FEMA (Transfer of Issue of Security by a person resident outside India) Regulations, 2017 and 100% FDI was permitted under automatic route to the SBRT Regime.

With the introduction of FDI in retail business. The government has ensured 100% FDI under approval route in the SBRT Regime. The norms of the FDI have made it compulsory that, when the entity is doing FDI of more than 50% then 30% of the goods must be procured from India.

What is the Aim of the Government in the introduction of Single Brand Retail Regime?

The agenda is to make it more investor friendly and to help the foreign investors operate in e-commerce platforms.

It is very simple that government has enhanced the system related to ease of doing business. It is good for the economy and it has improved our GDP.

The idea is to promote the Indian domestic sectors- micro, small and medium enterprises (MSME’s).

FDI in SBRT is subject to the following conditions such as:

All products should be used under one single brand.

Which are sold under same brand intentionally, in one or more countries.

Products must be branded during manufacture.

In respect of FDI in SBRT, beyond 51% of the FDI, 30% of the value of goods, procured should be sourced directly from India, preferably from MSME, and Cottage Industries, artisans, craftsmen, in all sectors.

How Single Brand Retail Regime is different from the multi brand retail regime?

The markets of small shop owners have come up in the difficulty due to the FDI. However, there is a difference between, multi brand retail regime and Single Brand Retail Regime. In single brand retail regime, they bring only the luxury or premium brands or goods or services, so that it does not create direct conflict with the small business owners/enterprises in the Indian Markets.

Whereas the Multi brand retail regime means, where the enterprise selling multiple products under one roof, such as, Big Bazar, Lifestyle, shoppers Stop etc. The seller is selling all types of products from different brands.

Hence, in order to avoid the difficulty in the markets, Government of India allowed only 51% of the FDI that too with approval of the government in the multi brand retail regime.

What is 30% norm under FDI in Single Brand Retail Regime?

There are certain points under consideration kept when FDI is more than 51% of the value, and 30% of the goods are to be procured from India.

A support to new Start-ups

This means that 30% procurement of the goods, which should be sourced directly domestically, when FDI exceeds, 51%. This is a support to new start-ups, where the 30% sourcing requirement have to be met, at an average of 5 years total value of the goods procured. This procurement begins every year at 1st April, of the commencement of the SBRT business.

The Single Brand Retail Regime is required to meet 30% of the local sourcing norms on an annual basis.

What is Single Brand Retail Regime through E-commerce?

Where the entities are allowed to undertake the Single brand Retail Regime, operations through e-commerce, when it has:

When goods are to be considered as procured from local vendors?

The notification has been released by the DPIIT, where it has clarified that goods procured from local vendors shall be considered procurement under 30% rule:

It can be concluded that the above chapter Foreign direct Investment can be divided into two parts one is the single brand retail regime and other is the multi brand retail regime. They are governed and controlled under two approval routes like Foreign Direct Investment Approval Route and automatic route. These routes have been defined to ease the of doing of business under the underlined retail mechanism. The purpose is to boost economy. The single brand retail regime has been designed in such a way by the government of India, that it brings no conflict with the local shopkeepers. The idea is to boost the manufacturing in India. The local vendors will be getting more work and employment under the scheme. Looking at the positive side of the scheme, we have seen that after coming of this FDI, the global ranking of India has improved for ease of doing business in India, from 79th position to 63rd.

6 Steps for a Successful Overseas E...

Overseas expansion is the route to enter different markets, acquire the best minds and set the...

Analysis on Types of Foreign Invest...

Overview of Investment in India The government of India has brought out various modes of foreig...