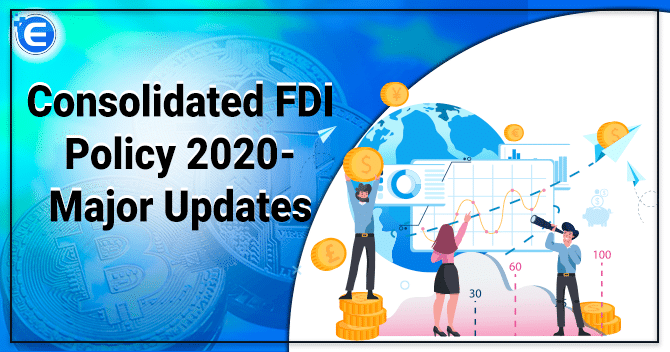 The FDI policy in India indicates the decisive factors which allow foreign investment in India. Apart from this, foreign investors and entrepreneurs in India depend on this policy for their avenue of investment options. Over the years after liberalisation, India brought out the Foreign Exchange Management Act, 1999 (FEMA). FEMA deals with factors such as inbound investment, outbound investment, and compliance of laws with the Reserve Bank of India. With all the circulars issued by the RBI, the DPIIT has brought out consolidated FDI Policy in India from time to time.

The consolidated FDI policy of 2020 was brought out in October 2020. The waiting period for foreign investors and other entrepreneurs is over, as their doubts related to foreign investment would be answered through this policy update.

Different Consolidated FDI Policies brought out by the Indian Government

The DPIIT over the past five years has brought out different policies. These policies were brought out to understand the changes in the foreign investment carried out by foreign investors. Apart from this, digitisation and urbanisation have played a major role in amending FDI policy in India.

There are many factors which led to the delay in the government to bring out this policy. Some of the factors were policy changes in the amendments carried out by the government.

However, the following factors led to the delay in bringing out this policy:

Some of the changes would relate to the routes of proposed investment from foreign countries. This consolidated policy came out on 15 October 2020.

All the doubts related to investment would be answered through this consolidated policy.

The following are the changes in the FDI policy:

For any Foreign Direct Investment, consent is required from the respective regulatory authorities.

The below provides categories of sectors which require consent:

The above sectors require prior consent from regulatory authorities under the consolidated FDI policy of 2020.

After three years the DPIIT and Government of India have brought out the consolidated FDI policy for 2020. The major changes in this policy in comparison to other policies are the amount of investment carried out in respective sectors. Other changes will include the new amendments related to neighbouring countries that share land borders with India. Digital communications sector has been allowed 26% FDI. However, government approval is required for this sector. Apart from this, relaxations have been made for the e-commerce sector, especially for products that are dealt with market place business. FDI is only allowed for e-commerce companies that deal with B2B business. This FDI policy has brought out all the answers and cleared doubts for prospective investors.
Press-Note-No

FDI in Digital Media: Progress and...

Recently the government brought out a clarification regarding the amount of FDI in Digital Medi...

All you need to know about Foreign...

Any form of investment in India from any foreign company is considered as foreign investment. T...