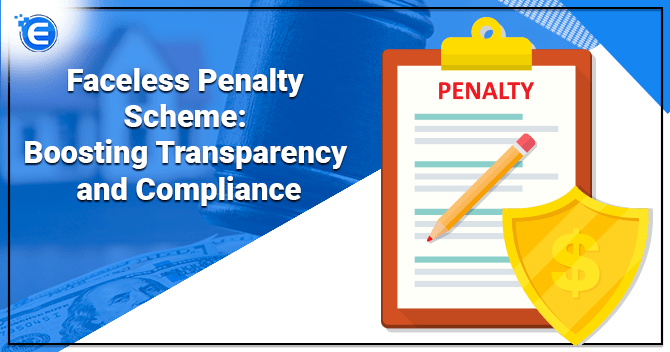 The income tax department may levy penalties under different provisions of the Income Tax Act, 1961[1] against a taxpayer. Under the scheme, the penalty orders that are issued shall be reviewed, and all the penalty related proceedings shall be taken care of digitally.

Under this scheme, different aspects of penalty related proceedings regarding the communication exchange, including the issuance of show cause or initiating penalty proceedings, obtaining information or any evidence from the assessee taxpayer or tax department etc. shall be through the electronic mode.

National Faceless Penalty Centre shall be a centralized unit and shall be the sole point of contact between the penalty unit and the penalty review unit or the PRU or the taxpayer or any other person or the income tax authority or the National Faceless Assessment Centre with respect to the information/documents/ evidence or any other details needed for imposing penalty under the scheme.

Drafting the penalty orders by penalty units will include identification of points or issues for penalty imposition under the Income Tax Act, seeking information or clarification on points or issues so identified and providing the opportunity to be heard to the assessee or any other person and analyzing the material furnished by the assessee or by others and other functions that is required for imposing penalty.

The taxpayer is not required to appear personally or through an authorized representative in front of the income tax authority at National Faceless Penalty Centre, Regional Faceless Assessment Centre, PU, or PRU due to any proceedings under the scheme.

The Faceless Penalty scheme is expected to reduce the chances of error in the penalty orders. It also rules out any bias on the part of tax officers by reducing human interaction that can lead to taxpayer’s harassment. The cases shall be decided in a uniform and standardized manner on their merits and without any subjectivity.

The taxpayer can benefit from the overall objective of fairness in the orders of penalty as the scheme enhances the degree of transparency, accountability, and efficiency in the order.

By bringing objectivity in the penalty related proceedings can smoothen taxpayers experience and can help in gaining better compliance.

Procedure of imposing penalty under the Faceless Penalty Scheme

The following procedure shall be followed:

How is the Faceless Penalty Scheme similar to other faceless schemes?

The scheme has following similarities with other faceless schemes:

How does the new income tax returns faceless scheme help taxpayers of the country?

The new income tax returns faceless scheme helps taxpayers of the country in the following ways:

Read our article:E-assessment Scheme for Scrutiny Under the Income Tax Act

The Union Government in Budget 2020 has proposed a new tax regime by slashing Income Tax Rates....

This post is all about 25 major income tax judgments therefore, we have prepared a digest howev...