Guidelines for compounding of offences under Income Tax Act, 1961 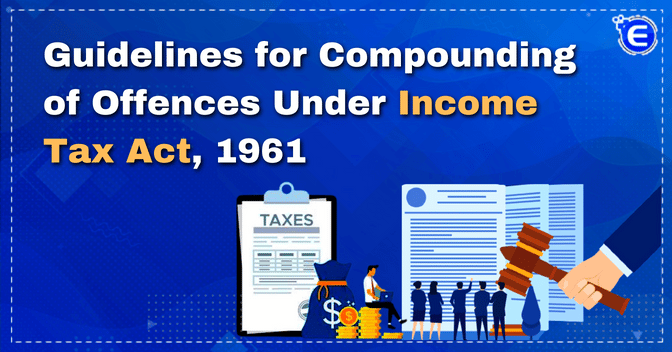 What is the compounding of offences?

The phrase “compounding of Offences” can be understood as providing the accused a chance to pay a sum of money in place of the prosecution. It is a settlement mechanism where the accused gets relieved from the charges imposed on them by paying the required amount. It avoids the lengthy litigation process and frees the accused from any charges. Henceforth, it is a shortcut of removing a tag from the antecedents of the accused.

Applicability of Guidelines for Compounding of Offences

Any offences provided under Chapter- XXII of the Income tax act, 1961 can be compoundable either before or after the proceedings. The offences can be compounded by the following:

It is a general principle that any prosecution initiated under IPC cannot be regarded under the compounding of offences. However, Section 321 of IPC states the withdrawal of such offences. According to the guidelines, if a case is filed under IPC and Income Tax act between the same parties and under similar facts. Provided that the Income Tax Act provides such an offence as compoundable, then the competent authority can file for withdrawal application for the suit under IPC.

The offences are classified into two categories under Chapter XXII of the act:

Procedure for Application for Compounding of offences

The procedure for compounding of offence shall be as follows:

Before making any application for compounding of offences, the individual has to pay:

An individual can file the application independently, regardless of whether the department has any note of it.

In case any prosecution complaint is filed in court, then the compounding application shall be filed within 12 months from the end of the month of complaint filing in court. However, the current guidelines provide leverage in the period of fulfilment by extending the period of 12 months to 24 months, provided it will be subject to an increased compounding rate of 1.25 times of standard compounding charges.

The offences that are compoundable under the guidelines are:

Competent authority for compounding of offence

The competent authority for compounding of offence are:

Procedure for Compounding by Competent Authority

The procedure for compounding of offence are as follows:

If the competent authority does not accept the application. In that case, the authority shall inform the applicant within six months from the end of the month of receipt, stating the total amount that should be paid.

The time limit prescribed under the above guideline is merely indicative, and it did not provide any limitation period for disposal of compounding application.

The charges shall include the following amounts:

These charges shall be payable in addition to the outstanding tax, penalty, interest, and any other sum.

The fees for compounding of offences for various sections are as follows:

The fees under the said head shall not exceed the TDS amount that is in default.

In cases where there is an evasion of a penalty, then, 100% of such penalty

Any period of stay granted by the Income Tax Authority, court or the appellate tribunal shall be excluded.

i.  Rs 4,000 per day, where the tax on returned income reduced by tax mentioned under section 140A (1) of the act is paid before the due date of filing of the return, is more than Rs 25 lakhs

The current guidelines will provide a chance of recovery from default made by an individual. The policies have widened the scope of compounding of offence and provide a detailed structure for compounding fees. It has converted Section 276, which is punishable as compoundable and provides the liberty to the individual to get free from the prosecution charges by paying the compounding fee. Also, the time limit has been increased from 24 months to 36 months, which gives the assesse extra time, provided that the extensionis subject to approval from the competent authority.

Read our Article:Compounding of offences under FEMA

Sections 44AA and 44AB were introduced for simplifying the tax compliances of people in busines...

Tax on Distributed Profit of Domest...

Payment and Computation of Self Ass...

Individuals are required to pay self assessment tax for income from other sources. No specifica...