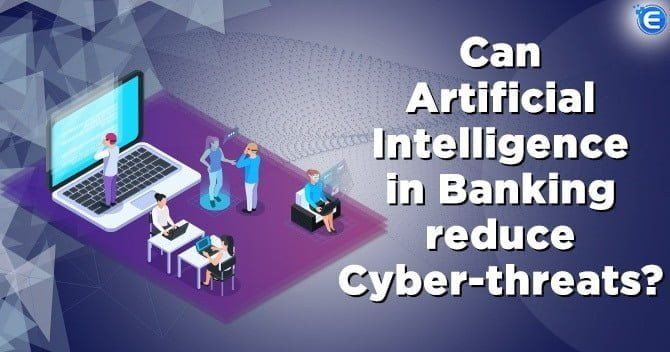 The advancement of technology has allowed cyber attackers to use more sophisticated methods to access digital networks. This means now they can cause much more damage than before. Financial institutions like banks are under the radar, and it’s high time that they upgrade their security set up. In this article, we discuss whether Artificial Intelligence in banking reduces these threats.

What threats does the banking industry face in today’s time?

As we all know, banks deal with a large amount of customer’s sensitive data. These data are stored in technological equipment on a large scale. Without a robust security system, the bank’s sensitive data is at stake and can be accessed by cyber attackers to execute their malicious intentions.

Some of the biggest threats faced by the banking industry include the vulnerability of unencrypted data which can be accessed by hackers, malware also poses a risk to a bank’s cybersecurity, third party services which are employed by financial institutions may also pose a security threat if it does not have a good security set up.

Ransomware attacks and phishing scams are also a threat to the banking industry that can cause damages running into millions of dollars. Therefore the banking industry is constantly facing these cyber threats, and with the advancement of technology, they have only become more threatening.

Is Artificial Intelligence in banking a boon to cybersecurity?

The development of technology has improved the security set up. One such prospect that has played a massive role in strengthening cybersecurity is the tools and techniques developed by Artificial Intelligence (AI).

AI is no more a new term for many of us as it is now being used extensively by many industries. AI has also helped in the fight against cyber attacks. Machine learning has been that part of AI that has played a significant role in detecting cyber threats based on data analysis, and it identifies a threat before it exploits a vulnerability in the system.

The PNB (Punjab National Bank) scam threw light on the vulnerability of the banking sector to enormous risk. Artificial Intelligence in banking can monitor such potential threats and allow the banks to deploy foolproof and fraud detection system that can save the bank from millions of cyberattacks.

Banks, while providing swift transactions, can use AI to detect fraud in transactions, or it can detect any suspicious activity in the account of a customer on the basis of behavior analysis. The banking industry has witnessed a rising number of cyber attacks in the last few years; therefore, deployment of AI can be used to ensure cybersecurity and thereby safeguarding the personal data of millions of users.

Anomaly detection is an AI approach that can help in identifying deviations from a system’s normal activity, thus making it a useful asset in cybersecurity. Some of the cyber attacks, like phishing, can compromise on certain user accounts in banks. These are increasingly difficult to detect simply because once a user account is compromised, the cyber attackers have legitimate access to the network. In such a situation, AI software can be trained to detect behavioral patterns for every account in the bank.

So, Is Artificial Intelligence in banking the answer to cyber threats faced by the banking industry?

While the thought of letting AI takeover completely may be very tempting, but the fact of the matter is that AI comprises numerous things; thus, it is very versatile. While AI is useful for maintaining cybersecurity, it is also making its way into the employ of hackers for executing malicious works.

As technology evolves, cyber attackers are also enhancing their attack methods and techniques to exploit the banking industry. There is no second thought to the fact that AI has been a useful component, but it is like a double-edged sword. The advancement in AI makes the case more interesting to see how this technology will turn out as a boon or a bane to the cybersecurity.

What are the potential risks posed by AI that makes it full implementation difficult?

A massive deployment of Artificial Intelligence in banking comes with its share of risks and opportunities. Many banks around the globe have invested heavily in AI, but the risks involved with its usage are many times ignored.

In this segment, we shall take a closer look at some of the risks posed by AI-

Banks often face the risk of rejection from their employees due to the automation of the tasks, which can cause job loss and the reassignment of jobs. AI can potentially improve enterprise productivity, but it will also reshape the way employees function. This can cause dissatisfaction among employees as AI can be substituted for customer service executives, compliance officers, etc.

The deep learning models in AI have proved to be much better than humans in terms of decision making, but the fact if the matter which cannot be ignored is that they are not transparent with respect to how they came to such conclusions. This can expose banks to risks without even knowing that they are under threat.

Banks in India have an emotional value and attachment with customers. This can be reduced by deploying AI and automation as there will be less customer contact, and the essence of human touch will be missing, thereby causing the customer’s loyalty to be reduced significantly.

So what conclusion do we arrive at? It brings us back to the question of whether Artificial Intelligence in banking can be effective in dealing with the cyber threat. The answer is yes. However, in answering this question, we need to zoom out to look at the bigger picture, which involves answering the risks faced with AI deployment.

Our Recommendation: Artificial Intelligence: An Insight Report of Future of Fintech in India

Significance of Blockchain in Banki...

The significance of blockchain in banking sectors has been rising like never before. It has the...

An Insight into RegTech (Regulatory...