Breaking The Concept of Deep Learning 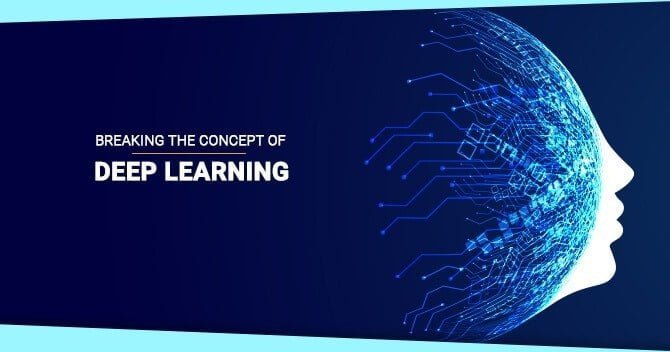 What is Deep Learning?

Deep Learning, a bit complicated process to implement but a fairly simple one to explain. A function of artificial intelligence that is capable enough to emulate the working of human brains. A subset of machine learning acts as a living soul brain while processing data, forming patterns for use in decision making.

Deep learning is exclusively used in the ‘Fintech’ industry. The implementation of deep learning is not limited to any particular field; instead, its usage is wide and limitless. The financial industry follows the latest technological trends with keen interest. Fintech applications are widely accepting and executing the concept of deep learning.

The implementation of deep learning in real-time is tricky. It employs layers of algorithms to process data, understands human speech and recognizes objects. It uses multiple powerful computers, massive data sets along with with neural networks and an algorithm called back-propagation. Information is processed through each layer. The output of the previous layer becomes the input for the next layer.

The concept of ‘Deep Learning’ is not new in the world of science and technology. The term has been in use since the 1950s. But its advancement into the world of artificial intelligence is new and trending. In 1986, Geoffrey Hinton, known as the “Godfather of Deep Learning” worked with researchers and made the concept of deep learning more clear and precise. They reveal the world how neural networks can be trained using backpropagation for more advance word prediction and shape recognition. Now, deep learning has taken over the technology and has become an integral part of almost everything. From Siri to pharmaceutical research it is being used in almost everything.

Deep learning models are prepared by utilizing huge arrangements of marked data and neural system structures. They need no manual feature extraction and grab features directly from the data.

CNN’s make the process a bit easy for the end-user by eliminating the need for manual feature extraction. Hence there is no need to identify features to classify images. CNN has the potential to extract features directly from the images. Computer vision tasks such as object classification have become highly accurate because of the automated feature extraction.

CNN has multiple hidden layers via which it can detect different features of an image. The complexity of every learned image features increased by hidden layers. For instance, the primary hidden layer could figure out how to distinguish edges, and the last figures out how to identify progressively complex shapes explicitly took into account the state of the item we are attempting to perceive.

Deep Learning And Its Impact

Deep Learning is considered a revolution in the field of artificial intelligence. In a 2012 New Yorker piece, NYU professor and machine learning researcher Gary Marcus expressed his views on deep learning. He said, “While it was important to work, with immediate practical applications,” it represented “only a small step toward the creation of truly intelligent machines.”

Marcus further explained, “Realistically, deep learning is only part of the larger challenge of building intelligent machines. Such techniques lack ways of representing causal relationships (such as between diseases and their symptoms), and are likely to face challenges in acquiring abstract ideas like ‘sibling’ or ‘identical to’. They have no obvious ways of performing logical inferences, and they are also still a long way from integrating abstract knowledge, such as information about what objects are, what they are for, and how they are typically used.”

Now, seven years later, the concept of deep learning has become vaster. It is more sophisticated; credit goes to, largely increased computer power and usage. It is applied in multiple domains and help humans to perform their services better. It is used in voice search, medical diagnostics, automatic text generation, and even weather prediction.

With practical and well-versed knowledge in legal and finance, Surbhi has dedicated 3 years of her life in managing financial matters of the companies she has worked in. Lately, she has shifted her focus and now she is keen on spreading her knowledge via writing. Affluent in writing, she now writes on legal and finance related topics.

The RBI on December 6, 2019, has issued notification for  Asset  Reconstruction ...