Benefits of GST for Retail Sector 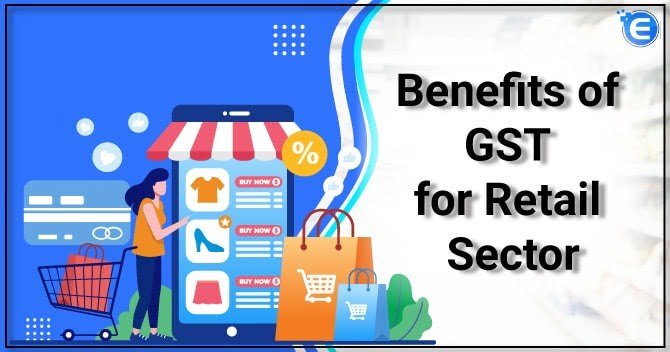 GST will centralize the state and central tax and made it into one so that it becomes easier for the masses to pay the one kind of tax in one form and eliminate all the confusion and hindrances related to paying tax. The business would now have to be registered under GST only once under the GST laws and can be operated in any state, making it easier for traders to carry out and expand their businesses.

It has also benefited the final consumer as the prices of the goods and services could be lowered in some items and more streamlined in the other items. GST is set to have different impact and implications on various industries, some for the better and some for the worse. There are also industries, such as agriculture, that are exempted from the GST laws and do not have to be registered under it.

One of the industries that are going to be drastically affected by GST is the retail industry. The companies in the retail sector would have to be registered under the GST laws and also follow the various GST tax slabs set by the Council according to the size of their business. India’s retail sector is one of the fastest growing sectors in the country and it has also attracted a lot of foreign investment, which helps in boosting the economy of the country.  With GST in place, all the operations related to taxes will be streamlined and benefit the traders as well as the customers and help towards the growth of the economy.

The various Benefits of GST for Retail Sector are as follows:

GST will reduce the tax burden on retailers as they pay many different forms of tax in the current scenario such as CAT, CST, Octroi, service tax, and much more. GST will streamline everything into one single tax so that it will be easier for the retailer to understand the taxation and to pay it in one shot.

GST targets smooth flow of Input tax credit. This will reduce the burden of tax on the retail sector as it will set off tax starting from the producer’s point to the customer’s point. GST will make an impact on the flowing effect of taxes and help to streamline it into one category.

Since the retail business can be carried out in every state upon a single registration, retailers will not have to maintain warehouses in every state, and this will be very beneficial regarding the cost to the retailer. The transportation industry will flourish as they would carry more goods from one state to another as it will become easy to transfer goods under GST. The lead time will also reduce in transporting the goods as the inter-state boundaries would be more free-flowing. GST will help the retail sector become more efficient in their operations.

In the new GST model, any supply without consideration will attract tax and therefore, everything will have to be accounted for. The retailers would give out gifts and promotional items with products as a part of their marketing strategy, which used to be tax-free in the current taxation system. When the GST gets implement, no such rule will be applicable and the retails will have to pay tax on the gifts and promotional items as well, therefore, they’ll have to re-think their promotional strategies.

GST will lead to the unification of markets as it will streamline the state and the central tax and eliminate all the confusion of taxation in different markets. Retailers can easily expand their business beyond boundaries as they have to register their business only once and then can carry operations in all the states. This will also contribute towards the growth of the retail market and help boost the economy of the country.

GST will force the retailers to re-think their supply chain strategies and re-model their network as it will open a lot of doors and opportunities for retailers to expand their business. It will give them the freedom to draft better business strategies and implement it for further growth of the retail sector.

Retailers would be able to carry out the business with more ease as the taxation and other policies would be streamlined under the new GST rules[1], and they would not have to waste their time in paying various taxes and waiting to fulfill all other policy requirements of the current taxation system.

The retail sector would start attracting a lot of start-ups as they would have to register their business only once and also claim the benefits of taxation for start-ups under the new GST laws. They would also be able to carry out business operations more freely with the new policies in place and would get more attracted to join the retail sector.

There are many more advantages for the retailers under the new GST laws and it would be a great boost for the retail sector as the policies and taxation would be streamlined under one head. The businesses would flourish since more retailers would be contributing to the growth of the retail industry and in turn of the economy as they would be able to carry out the activities without any hindrances and be able to expand the business into different states without worrying about the additional costs. The supply chain will benefit tremendously as the cost of transport and warehousing will reduce under the new GST laws and help the retailers scale their profits, which could also lead to reduced prices for the final consumer over a period of time. The retailer can directly pay the taxes online and will not have to go through a middleman.

Hope, this helped you gain certain clarity on the effects and benefits of GST for Retail Sector.

Read our article: Applicability and Effects of GST on NBFCs in India

The 43rd GST Council meeting was held under the chairmanship of Union Finance Minister Nirmala...

All about GST Registration for Bran...

As per the GST Act, the business entities operating in two different states must obtain separat...

What is a Credit Transfer Document...

With the implementation of Goods and Service Tax from 7th July 2017 one of the major concern...