Attendance of Audit Committee Chairperson at the AGM 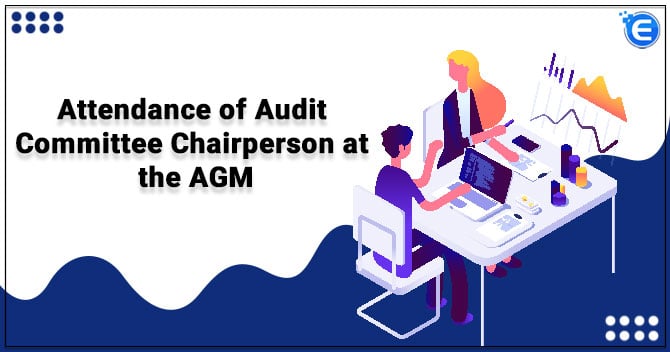 According to the provisions of section 177 of the Companies Act, 2013 with Rule 6 of Companies (meetings of board & its powers) Rules 2014, listed companies and other unlisted public companies with paid up capital of 10 crore rupees or more, or having a turnover of 100 crore rupees or more and having outstanding loans or borrowings or debentures or deposits beyond 50 crore should constitute an audit committee. In this article, we shall look at the requirement of attendance of audit committee chairperson at the AGM.

Functions of the Audit Committee

The audit committee should act in accordance with the terms of reference provided in writing by the board and perform the following functions:

The audit committee chairperson should mandatorily attend the Annual General Meeting (AGM) of the company so as to answer the queries of shareholders pertaining to financial statements, as the audit committee examines it and the auditor’s report thereon.

So here comes a question that in case where the Audit Committee Chairperson is unable to attend the AGM of the company, then can he authorize any other member to attend and represent him on his behalf. The answer is Yes since the sub-section (7) of section 178 provides that the chairperson can authorize any other member to attend the AGM on his behalf and answer queries of shareholders.

The Secretarial Standard-2 on general meetings specifies that the chairperson of the audit committee can authorize any other member to attend the AGM on his behalf if he is unable.

Attendance of the Audit Committee Chairperson at the AGM

The NBFC private companies that must constitute an audit committee should also comply with the provisions of the Companies Act 2013 pertaining to audit committee.

In case where the company contravenes this requirement of sub-section (7) of section 178 and non-compliance results which means the chairperson or his duly authorized representative fails to attend the AGM of the company, then the company and its directors are deemed to have violated the requirements of the section.

Penal provisions shall apply in case of default of the section. If it’s noticed by the inspection officer that there has been a violation of section 178 of Companies Act, then the inspecting officer would take penal actions against the company and its defaulting officer for the violation. If the inspection is not taking place, even then, the ROC can go through documents submitted by the company.

Thereafter if there has been a violation, then show cause notice is issued to the company and to its defaulting officers, calling them to show cause within a time limit from the date of issue of show cause notice as to why legal action should not be taken against them, failing which penal action would be necessitated.

What is the option available to the company?

The company would most likely fail in its bid to defend itself in case of non-attendance of the Chairperson or for absence of his authorized representative. Therefore there is no other option than going for compounding of offenses.

As you would be aware of the fact that in filing the compounding of offences, the company may be required to spend huge amount of time and money to resolve the matter. The whole process begins from e-filing of compounding application, lodging physical copies of the application with the ROC, and attending hearings when called.

Those who receive the annual report, such as the stakeholders, investors, etc., would know the non-compliance by the company and the compounding fee details, which can dent the reputation of the company big time.

Proper compliances of all applicable laws is necessary for companies as in this case audit committee chairperson should mandatorily attend the Annual General Meeting (AGM) of the company. The present companies act of 2013 has enhanced the role of Company Secretaries to ensure that the company has effective administration and to ensure absolute compliance by doing things right.

Read our article: Absence of Chairperson of Audit Committee in AGM

Mandatory Compliances under Companies Act, 2013 With the rise in number of young entrepreneurs...

A number of companies have been employing a technique in vogue these days of retaining their hi...