Anti-Profiteering Provisions under the GST Law 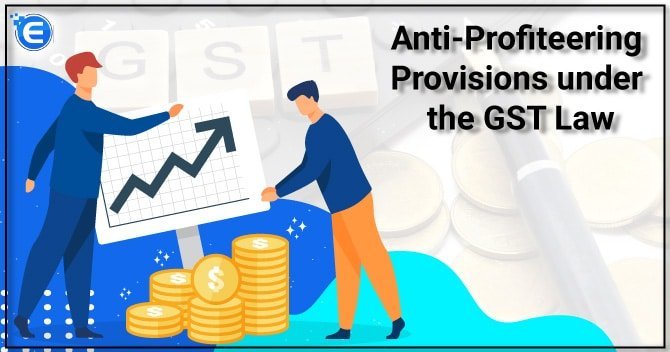 Lok Sabha has finally passed the GST bill, and it is implemented from July 1, 2017. It has brought a revolutionary change to the way business and the economy runs in India. Some of the industries would benefit from the Goods and Service Tax laws, whereas others are finding themselves as a loss, which will force them to pay more taxes. This article is explaining about Anti-Profiteering Provisions under the GST Law.

GST would centralize the state and central tax, and the businessman would have to pay only one form of tax, which is the GST. This would help in streamlining the various taxes and registrations that a business would typically have to go through and would make the work of a businessman easier and less time consuming, once he or she gets used to it.

What are Anti-profiteering provisions under GST?

It has been incorporated under GST law to provide benefit of reduction in GST rates to consumers in terms of reduced prices and not allow excess profit margins to businessmen. The goods and services suppliers should pass on any reduction in the tax rate or the benefit of input tax credit to consumers through commensurate reduction in prices.

GST and Its Impact

One of the sectors, which is going to get heavily affected by the GST, is the anti-profiteering sector where one can see the taxes being levied heavily and this could cause increased prices in all forms. The anti-profiteering sector would be facing more amounts of taxes depending on the scale of business, and this would affect the working of the business in that particular industry.

With the freedom to move about between states and completing the registration of the business only once, the transaction of business would increase, hence attracting more GST on the products and services sold. The provisions for these have been made under GST so that it does not affect the final customer of the item. Although the heavy tax levied on the anti-profiteering sector was under debate for a long time, the GST Council[1] has passed it, and such taxes will be levied in this area.

The features of the Anti-Profiteering Provisions under the GST are as Follows:

There are many such points and features that have been established under the new GST regime in order to protect the interest of the various industries as well as the customers. The laws under anti-profiteering provisions would help protect the increase in prices of goods and services and help the customers deal with the GST laws that will affect the working of the entire economy.

The government would analyze the pre-GST and the post-GST cost of each product and the tax rate for the same, in order to calculate the tax benefit that a supplier should get in terms of the new prices that will be set under GST. This provision has been created in the best interest of the customer, in order to protect them from the flared prices that the new GST economy would attract.

There are some special features for the SME Sector under GST. However, MSMEs would have to spend a lot of time understanding the new GST terms and draft their taxation accordingly.

Duties of the Anti profiteering Authority

As per rule 127 of the CGST Rules, the duty of the authority is as follows:

Reduction in prices, return to the recipient, imposition of penalty as prescribed in the CGST Act 2017, cancellation of registration under the Act.

The anti-profiteering provisions will give a lot of power to the taxmen and bigger corporate companies would be the primary target. Therefore, everyone would have to maintain their accounting books as up to date as possible in order to pay only the tax amount that falls under GST. It would be more advisable for larger companies that are making huge profits to learn and file their tax online without having to go through a middleman, as it would allow them to file the tax with more integrity and pay only as much as required. Companies would have to re-visit their tax plans and create new ones in order to keep the business running and to prevent the prices of the products to increase.

Find Out If E-Commerce Players Shou...

Applicability and Impact of GST on...

India has one of the largest Pharmaceutical Industries in the world, with the country’s healt...