Actions taken by ED in the 2G Scam 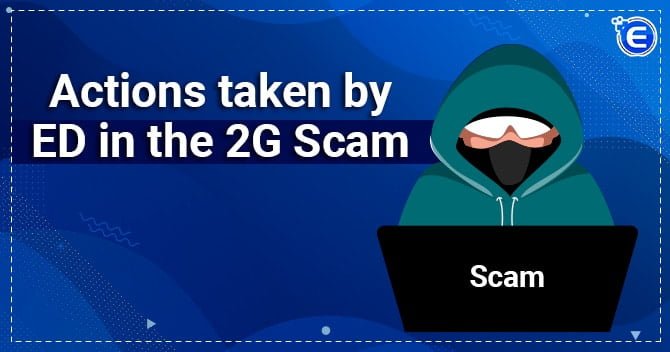 The 2G Scam was called the biggest scam in Indian History. Times Magazine has called it the second biggest instance of abuse of power at the world level and has kept it just below the famous Richard Nixon’s Watergate Scandal. The allocation of 2G Spectrum licenses for limited data transmission and mobile communications was a complex deal for the public. When the CAG[1], in a report, stated that a fraud/scandal of Rs. 1.76 lac crores have taken place, then this scandal took its own shape in the public domain and became popular with the name of 2G Scam.

The complete facts of 2G Scam

In 2008, the then communication and IT Minister, A Raja, allocated 122 licenses of 2G spectrum Unified Access Service (UAS) with fixed prices and conditions favourable to a few telecommunications (telecom) companies. He sold licenses at a very low price with no rules and regulations. He then reduced the day of filing the application for the 2G spectrum, and so many companies failed to apply; then again, at the time of issuance of the 2G spectrum, he reduced the hours of payment and submission of cheques and other requisite documents. Only his favourable companies were ready with payment/cheques and other documents. These allocations were supposed to be made by a declared auction price on a first-come-first-serve basis. Still, A Raja did not follow any advice of TRAI, the Law Ministry and the Finance ministry while allocating these licenses. Hence, the world’s second-biggest abuse of executive power took place, popularly remembered as the 2G scam.

The allegations made by the Comptroller and Auditor General was that A Raja had taken bribes while allocating the licenses. It also mentioned that the telecom companies’ cheques or demand drafts made for payment of these licenses were backdated as if they already knew about these allocations. It further mentioned in its report that few of the companies to whom the licenses were allotted had no experience in telecommunications, and they were completely ineligible for the 2G spectrum license. Some of the companies with the license have suppressed their relevant facts. Along with A Raja, there were 14 more people involved in this 2G scam and also three telecom companies, namely, Reliance telecommunications, Unitech and Swan telecom. Later on, CAG estimated and said that the 2G scam was of a total of 1.76 lac crores.

These were three cases registered in the 2G scam, one by the Enforcement Directorate and two by the Central Bureau of India. The case was registered against a total of 17 people.

The trial of the 2G scam case was initiated in 2011 when the trial court framed charges against a total of 17 accused. On 21st December 2017, CBI special court acquitted all the accused of the 2G scam due to lack of evidence. The court mentioned in its order that the prosecution failed to prove its case beyond a reasonable doubt.

In 2012 Supreme Court cancelled all the licenses and said that they would be allocated again through auctions and a fair bidding process and imposed a fine of Rs 5 crores each on Unitech Wireless, Swan Telecom and Tata Teleservices.

Role of ED in the case of 2G scam

On 25th April 2014, ED filed a chargesheet against 19 accused in the matter of 2G scam for the offences under provisions of the Prevention of Money Laundering Act. Later the court took cognizance of the same. The ED informed the court that it was a prima facie case of money laundering done by ten individuals and nine companies. As per ED, all accused conspired to commit the offence mentioned under the Prevention of Money Laundering Act. During the investigation, ED found out that a transaction of Rs 200 crores had been paid to Kalaignar TV, which DMK, a political party, owns, as a bribe for granting a 2G spectrum license to DB Group companies. It was alleged in the chargesheet of ED that the wife of DMK prominent ruler M Karunanidhi holds 60% shares in the Kalignar TV, and other co-accused Kanimozhi and Sharad Kumar have a holding of 20% shares. ED also revealed that there was a flow of money from the Kalaignar TV to CFPL and Kusegaon Fruits and vegetables Pvt ltd. This was a reverse flow to show that they had not done any wrong, which started when CBI started questioning A Raja in connection with the 2G scam. It was prima facie evidence that subsequent beneficiaries made the flow of money. ED also said that if the CBI had not summoned the main accused, then the money could never come back. ED filed a chargesheet against 19 accused, out of which big names were A Raja, then telecom minister; Kanimozhi, Rajya Sabha Member; Siddharth Behura, then telecom secretary; R K Chandola, A Raja’s private secretary; Sahid Balwa (promoter of DB Realty and Swan Telecom); Asif Balwa (Director of Kusegaon fruits and vegetables); Sanjay Chandra (ex-MD of Unitech wireless); Gautam Doshi (Group MD, Reliance Grop); Hari Nair( senior VP, Reliance Group); Surendra Pipara (senior VP of Reliance Group); Vinod Goenka( promoter & MD of DB Realty and Swan Telecom); Rajiv Agrawal (Director, Kusengaon Fruits and vegetables); Sharath Kumar (MD of Kalaingar TV); Anshuman Ruia (Director of Essar Group); Vikas Saraf (Director of strategy and planning at Essar Group); Karim Morani( promoter & Director of Cineyug Films). Media persons such as Nira Radia, Barkha Dutt Vir Sanghvi and Rajdeep Sardesai were also made accused.

In 2013 ED issued a show-cause notice to four telecom companies for foreign exchange violation of Rs. 3,805 crores during its investigation in the 2G scam case. Such notices were sent to Loop Telecom Limited, Delhi because it failed to report RBI the receipt of foreign investment (FDI) and issued shares to foreign investors valued at Rs 549 crores; Loop Mobile Limited, Mumbai, for issuing shares of Rs 26 crores in violation of FEMA rules; DB Realty Limited, Mumbai for 2831 crores and ETA Star Property Developers Pvt Ltd, Chennai for 399.50 crores. ETA Star was also accused of failing to issue shares against the FDI in 180 days and failing to report RBI about issuing shares to foreign investors. ED further investigated these transactions and the role of these companies in the 2G scam.

In 2018 ED informed the Supreme Court that property value of Rs 2000 crores each would be attached in connection to the 2G scam.

CBI and ED had filed a plea in 2020 at Delhi High Court seeking an early hearing challenging the acquittal of the accused by a CBI special court in the matter of the 2G scam, so the court has agreed to a day-to-day hearing.

In 2021 ED filed a list of 122 people accused under the Prevention of Money Laundering Act, and in that list, the names of all the prominent accused of the 2G scam were also there.

The 2G scam came out in 2011 as the biggest scan in Indian History. The Times Magazine stated that it’s the second biggest abuse of power at the global level. The 2G scam was a fraud of 1.76 lac crores, and many big names were associated with this scam, including politicians, bureaucrats, businessmen and media persons. The lead person behind this 2G scam was telecommunication minister A Raja. ED filed a chargesheet against 19 accused, out of which 10 were individuals, including A Raja and 9 companies. The 2G scam was all about the allocation of 2G spectrum licences which was in charge of A Raja as head of the telecommunication department of government. The rules and regulations for this allocation were given by TRAI, the law ministry and the Finance ministry, but Raja did not follow them and allotted the 2G spectrum licensed to his favourable companies committing the 2G scam. After the chargesheet was filed, the trial was initiated, but in 2017, the CBI Special Court acquitted all the accused. Then again, the CBI and ED filed an appeal against such acquittal order in the matter of the 2G scam in the Delhi High Court and then in 2020; they filed a plea seeking a speedy trial on this case which the Delhi High Court agreed. Delhi High Court agreed on the plea filed by CBI and ED for a speedy trial in the 2G scam case and so, in reply, confirmed to deal with the said case on a day-to-day basis. Recently ED had filed a list of offenders of Money Laundering and named some of the accused of the 2G scam also.

Read Our Article: A look at some of the biggest Financial Scams in India

The word “Attachment of Property" can be construed as attaching properties of a person charge...

Applicability of PMLA cases through...

A recent judgment of the Karnataka High Court has resolved the dispute regarding the applicabil...

The Prevention of Money Laundering Act 2002 is one of the primary legislations to counter the o...