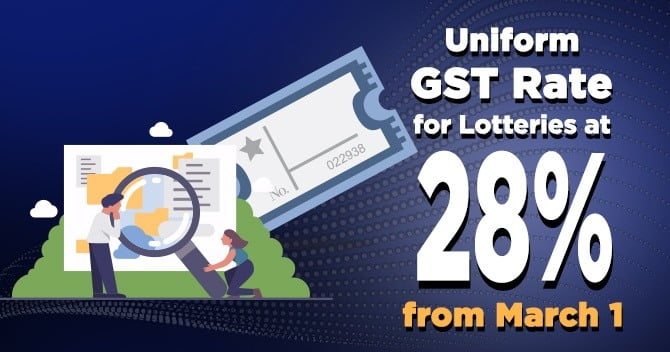 Lotteries will now attract a uniform Goods and Services Tax (GST) from 1st March at 28 percent as notified by the Central Board of Indirect Taxes and Customs (CBIC). Currently, a state-authorized lottery draws a 28 percent tax, whereas the GST rate of a state-run lottery is at 12 percent. The GST Council[1] led by Finance Minister Nirmala Sitharaman in December last year resorted to voting in order to decide the issue of the GST rate for lotteries. In the 38th GST Council meeting, the GST Council decided to impose a single rate of 28 percent for both the state-run and state-authorized lotteries. The revenue department notified about the new rate of GST for lotteries, on the supply of lotteries and amended its earlier Central Tax (Rate) notification. According to this amendment, there is no difference between the lottery authorized by state Governments and the lottery run by the State Governments for taxability, and the standard rate of 28% shall apply. Now, a uniform GST for lotteries has been implemented.

The lottery industry demanded a uniform tax rate on lotteries, following which a group of ministers was set up to suggest the implementation of a uniform GST for lotteries.

The eight-member group of ministers headed by the then Maharashtra Finance Minister Sudhir Mungantiwar had recommended that the Council would decide either on 18 percent or 28 percent GST for lotteries.

‘Lottery run by State Governments’ means a lottery which is not allowed to be sold in any state other than the organizing state.

‘Lottery authorised by State Governments’ means a lottery which is authorised to be sold in States other than the organising state.

Value of Lottery Distribution in GST

The value of lottery distribution as per Section 15 of the Central Goods and Services Tax(CGST) Act, 2017 shall be considered as 100/128 of the ticket’s face value or price as notified by the organising State in the Official Gazette, whichever is higher.

The supply of lottery tickets is covered by the Tax Invoice in accordance with Section 31 of the Central Goods and Services Tax (CGST) Act of 2017 and includes all the provisions referred to in Rule 46. The invoicing standards for a lottery ticket manufacturer are not relaxed in this provision. The GST for lotteries must be under the cover of a tax invoice containing all particulars required in an invoice.

Amendments Made in Notification No. 1/2020-Central Tax (Rate)

The notification was issued in the name of Pramod Kumar, Director of Government of India. Further, the Central Government following the recommendation of the Council of Ministers exercised their power under Section 9(1) and Section 15(5) of the Central Goods and Services Tax (CGST), 2017 seeks to amend the Notification No. 1/2017-Central Tax (Rate) which was issued on 28th June 2017, notifying the rate of Goods and Service Rates (GST) on the supply of lottery.

The following amendments are made in the Notification No. 1/2020-Central Tax (Rate):

Hence, through this amendment, S. No. 242 in Schedule II was omitted, and in Schedule IV, the Government introduced the Goods and Service Rates (GST) rates of the lottery.

Gambling in the form of lottery is permitted in a few states, where it has penetrated at grass root levels. By changing the GST for lotteries from a prospective date will help the dealers in implementing the new tax rate effectively. A uniform rate on lottery brings uniformity between the state-run and authorised lotteries fixing an equal footing for businesses in the same line.

Trademarks are graphically highlighted marks that assist people in identifying the firm or indi...

All you need to know about GST Suvi...

GST Suvidha Provider (GSP) was introduced and established by the Goods and Service Tax Network...