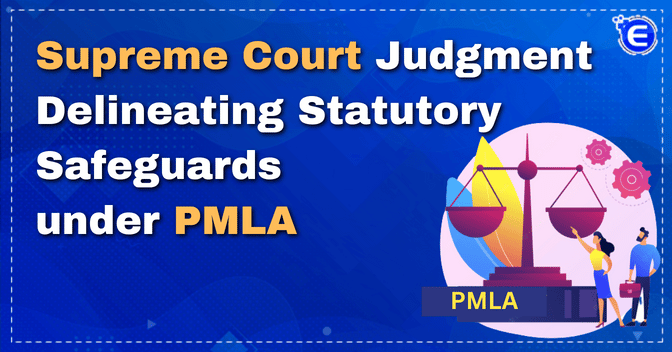 The Prevention of Money Laundering Act 2002 is one of the primary legislations to counter the offence of money laundering. It has envisaged enormous power to the Enforcement Directorate[1], which is the investigating agency under the Act. Powers of attachment of property, freezing of bank accounts, etc., are some of the provisions envisaged under the Act. However, the PML Act has been courted with controversies due to alleged unjust attachment of property and proceedings violating the constitutional rights of persons. This article will discuss the Supreme Court’s judgment elaborating on the Statutory Safeguards under PMLA.

Recently while upholding the constitutional validity of different provisions of the PML Act 2022, the Supreme Court in Vijay Madanlal & Ors. v. Union of India & Ors.elaborated on certain statutory safeguards under the Act. The Court has expressed several inbuilt safeguards provided by the Parliament while enacting the PML Act 2002.

The Court has held that procedural safeguards concerning the provisional attachment protect the interest of the person against whom proceedings have been initiated under the PML Act.

The Court has emphasized that all these inbuilt safeguards help prevent the arbitrary exercise or misuse of power by authorities under the Act. In the next segment, we will look in detail at the safeguards pointed out by the Supreme Court.

In early 2022, Solicitor General Tushar Mehta also argued before the Supreme Court that the PML Act places crucial safeguards on ED’s power. He contended that the statutory safeguards under PMLA prevent misuse of Section 19 of the Act, which confers the power of arrest to higher-ranked officials. He emphasized that the provision regarding arrest was neither unconstitutional nor arbitrary.

While going through Section 5 of the PML Act 2002, the Court said various inbuilt safeguards were in it. The Court stated that the sub-section provides for sufficient safeguards, which have to be adhered to by the authorized officer prior to issuing a provisional attachment order in relation to the proceeds of crime.

Section 8 deals with attachment, adjudication, and confiscation under the PML Act. The Court has observed that it is a wholesome provision that protects the interest of the person concerned as well as affords them a fair opportunity during the adjudication process.

Safeguards in respect of Arrest

In respect of arrest, the Court pointed out the following safeguards:

The Court observed that the safeguards as provisioned under the PML Act and the preconditions that the authorized officer must meet before arresting someone are stringent and of high standards.

The Court pointed out that the safeguards ensure that the officers don’t act arbitrarily but are held accountable for their judgment about the need to arrest a person as being involved in the money laundering offence. The Court expressed that in case the action of the authorized officer turns out to be vexatious, then such an officer can be proceeded against and inflicted with punishment under the PML Act 2002.

Read our Article: Attachment of Property under PMLA- An Overview

Under Indian criminal law, anticipatory bail is defined under Section 438 of Criminal Procedure...

Detailed Breakdown of Scheduled Off...

Concealment of wealth, whether earned legally or illegally, is not new. To curb this practice o...