Attachment of Property under PMLA- An Overview 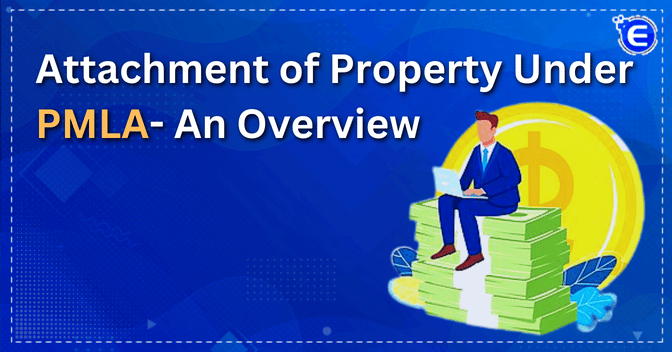 In India, the PML Act is the legislation which seeks to curb instances of money laundering. Under section 5 of the Act, the investigating agency, the Enforcement Directorate, has the power to provisionally attach property. This aspect has been subject to criticism due to its arbitrary use. However, the Hon’ble Supreme Court has upheld the provisions of this Act, including the power of ED to arrest, search, seizure and attach properties. This piece of writing aims to evaluate the concept of attachment of property under PMLA with the latest Judgment of the SC.

Section 3 of the PML Act defines the term Money Laundering. It provides that whosoever directly or indirectly attempts to indulge or assists, knowingly or knowingly, the party or gets involved in a process or activity connected with the proceeds of crime, concealing, possessing, or using and projecting or claiming it to be an untainted property, is guilty of the offence of money laundering.

To understand the meaning of money laundering, we need to peruse the definition of proceeds of crime as provided under the PML Act. It is suitable to mention here that the definition of proceeds of crime has been amended twice. After the amendment, the definition was modified to this- “Any property derived or obtained, either directly or indirectly, by a person as a result of criminal activity pertaining to a scheduled offence or value of any such propertyor where such property is taken or held outside the country, then the property equivalent in value held within the country or abroad.”.

The definition of Proceeds of crimes was first amended by the Finance Act of 2015[1], which expanded its ambit to cases where the property, which is Proceeds of Crime, is held outside India, then the property equivalent in value held within the country or abroad.

In 2019, an explanation was added to the definition of proceeds of crime whereby it was clarified that “proceeds of crime” shall include property which is not only derived or obtained from the scheduled offence but also the property which is directly or indirectly derived or obtained from criminal activity relatable to scheduled offence.

Provisional Attachment of Property under PMLA

If an order in the nature of Attachment of Property is issued, it prohibits the transfer, conversion,disposition or movement of such property.

Under PML Act, a property involved in money laundering can be provisionally attached by the appointed authority under the said Act. Such property can be attached for a period of up to 180 days if the authority has solid reason to believe that the person is in possession of proceeds of crime and that the proceeds of crime might be concealed or transferred or dealt with in a manner thereby frustrating the confiscation proceedings of such proceeds of crime. As per law, such reasons to believe must be recorded in writing.

It may be noted that the order regarding provisional attachment of property under PMLA is made after a report is forwarded to the magistrate under Section 173 of the CrPc for taking cognizance. However, suppose there is an urgency or suspicion that the property will likely disappear. In that case, the order of provisional attachment can be made even before the report is filed with the magistrate.

Process of Attachment of Property under PMLA

If the director or any other authorized officer has a reason to believe, based on the material under his possession, that proceeds of crime or property involved in money laundering needs to be attached provisionally, then a provisional attachment order is issued.

Confiscation of the property

Attachment of Property under PMLA- Provisions of Appeal

Supreme Court’s Ruling on Attachment of Property under PMLA

The apex court has recently upheld the constitutional validity of the PML Act in the case- Vijay Madanlal Choudhary vs Union of India. Various provisions of the Act were challenged before the Supreme Court. However, the Court clarified that when a provisional attachment order is confirmed, it does not mean that the property is also confiscated. It will be confiscated only when a formal order is passed.

The evil tactics of money laundering have plagued many countries over the years. This has forced legislators around the world to devise stringent measures to tackle these cases. India is no different as it enacted the prevention of money laundering act to curb the increasing menace of money laundering. With measures like provisional attachment of property under PMLA, the aim is to prevent and regulate money laundering. However, the investigating agency has been accused of using powers arbitrarily, and therefore, the provisions of the PML Act were challenged in Supreme Court. With the SC upholding the constitutional validity of the Act, the Act will continue to be implemented. However, a review petition has been filed against this decision of the Court. It will be interesting to see how things pan out in the near future.

Read our Article: IBC can halt attachment of property under PMLA proceedings