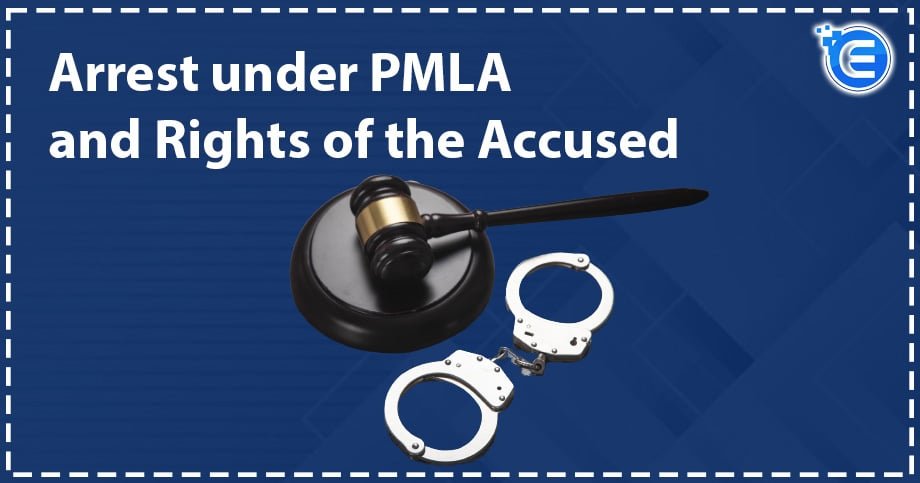 The concept of money laundering has existed for years; however, there was no dedicated law in India to deal with it until 2002, when the Prevention of Money Laundering Act was enacted. The PML Act lays down the methods to prevent money laundering and the procedure for attachment of property, bail of the accused, release of property, search and seizure, and arrest of the accused. This blog covers the concept of arrest under PMLA and the rights an accused person has in case of arrest by the Enforcement Directorate.

Provision on Arrest under PMLA

Section 19 of the PML Act gives the power to any Director, Deputy Director, Assistant Director of the ED or any other such authorised officer to arrest a person who is considered to be guilty of committing the offence of money laundering. Such an arrest can be made by the ED if there is sufficient reason to believe such an offence of being committed.

Further, such reason to believe must stem from the fact that the Officer has material or evidence in their possession that points towards the guilt of an accused. The word material here means any information, evidence or other details that an arresting officer holds, based on which the officer can establish the guilt on the part of the accused for the crime of money laundering.

Therefore, it is essential for any arrest under PMLA to be based on sufficient reason to believe the guilt of an accused in order to be a valid and legal arrest. Further, the Directorate of Enforcement must have adhered to the relevant procedure of arrest and upheld the rights of an accused person before, during and after the arrest. The responsibilities of the Enforcement Directorate and the rights of the accused person are further enumerated in Section 19 of the Act.

Procedure Relating To Arrest under PMLA

The procedure that needs to be followed in case of arrest under PMLA is laid down under the Prevention of Money-Laundering (the Forms and the Manner of Forwarding a Copy of Order of Arrest of a Person along with the Material to the Adjudicating Authority and its Period of Retention) Rules, 2005.

The officer who is arresting the accused under PMLA needs to mandatorily prepare an index of the order copy and all the evidence/material they have in their possession. The officer also needs to sign every page of such index of the order copy and, further, draft and send a letter to the Adjudicating Authority. Such a letter must be sent to the Adjudicating Authority in a sealed envelope along with all the material in possession.

Additionally, the Officer must submit a slip of acknowledgement in the format given in Form I of the Rules. A reference number and date of dispatching the envelope must be mentioned on the sealed envelope before sending it. Further, such an envelope must be marked as ‘Confidential’, and the words “to be opened by the addressee only” must be written on it. The envelope must also bear the address of the Adjudicating Authority along with their name and official seal.

The sealed envelope must be further kept inside an outer envelope, accompanied by an acknowledgement slip in Form II of the Rules. This envelope must also have the name and complete address of the AA along with the seal.

The officer arresting the accused must also compulsorily maintain the necessary registers and records, including the dak register, acknowledgement slip registration, etc. Such registers and records must be kept up-to-date with the details of any new person arrested right when the order copy and evidence/material are sent to the AA.

Rights of the Arrested Person under PMLA

Once an arrest under PMLA is made, the Authority must adhere to certain rights of the accused and due procedure relating to such arrest. These rights include:

An important thing to note here is that Section 19 of the PML Act or the PML Rules does not make it necessary for the arresting officer to present an arrest warrant to the accused before making such an arrest under PMLA. If the parameters laid down in Section 19, the rights of the individual and the process under the PML Rules are followed, the arrest can be made by the Authority without any prior warrant.

This is further supported by the fact that offences covered under the PML Act are cognisable and non-bailable. Therefore, an officer can make an arrest under PMLA without any warrant if Sections 19 and 45 of the Act are duly adhered to. The provision also has a retrospective effect, and therefore, crimes committed before such insertion also fall under its scope.

The contention regarding an offence being cognisable or non-cognisable does not hold any fruitful grounds when it comes to arrest under PMLA. However, due to the interlinking of the topic with the Code of Criminal Procedure, 1973[1], it has been subject to severe debate and opposing views from different Indian Courts. Before the nature of offence under PMLA for the purposes of arrest and arrest warrant can be understood, it is important to understand the concept of cognisable and non-cognisable offences.

In the case of arrest under PMLA, the ED has been granted powers for search, seizure and arrest separate and independent from the CrPC. The applicability of the Code to PMLA cases is limited only as per Section 65, which provides for the Code to be applicable only if it is not contradictory to the provisions laid down under the PMLA. Therefore, the matter of an individual’s arrest under PMLA Section 19 does not depend on the fact that the offence is categorised as a cognisable offence or a non-cognisable offence under the CrPC.

Further, a police officer can make an arrest under CrPC Section 41 simply on ‘mere suspicion’ of a crime being taken or taking place. However, in the case of PMLA, the arresting officer clearly needs sufficient material evidence and concrete reason to believe that the act of money laundering has occurred before making any arrest.

In the case of Vakamulla Chandrashekhar vs Enforcement Directorate & Anr. WP (CRL) 852/2017, where the petitioner sought an order of restraint on the ED’s power to arrest. The Delhi High Court rejected such an application and held that the power given to ED officers under Section 19 is valid, and any arrest made thereunder must also conform to Sections 40 and 41A of the CrPC. The Court further held that the intensity and risk associated with the crime of money laundering and further efforts to track and destroy evidence are extremely high. Therefore, the power given under Section 19 was upheld.

It was held in Chhagan Chandrakant Bhujbal v. Union of India Criminal Writ Petition 3931 of 2016 that the fact of whether the offence under PMLA was cognisable or not does, not affect the power of arrest under Section 19. An arrest under PMLA by an arresting officer is valid when the grounds of such arrest were informed to the accused in writing, and the officer followed the necessary procedure of submitting the arrest order to the Adjudicating Authority the next day. The Court also held that even if there was any non-compliance with the procedure of arrest, it would not make the arrest under PMLA null and void wholly. The accused will have to show that there was some prejudice attached to the arrest and such non-compliance to render it void.

Further, in the case of Virbhadra Singh & Anr vs Enforcement Directorate & Anr WP (CRL) 856/2016, it was observed by the Delhi High Court that an officer does not need to obtain any authorisation from the Court in order to conduct any investigation regarding a PMLA offence or to arrest any person. The officers of ED have been given the power to arrest an accused without presenting them with any arrest warrant or order from a competent court.

Recently in July 2022, in the matter of Vijay Madanlal Choudhary vs Union of India, the Supreme Court of India upheld the Directorate of Enforcement’s power to arrest, among its other powers, in money laundering cases. The Court further found that the provisions under Section 19 were reasonable and valid.

How to Deal with Wrongful ED Arrest under PMLA?

In case a person is wrongfully arrested by the ED in a money laundering matter, it is important to consult experienced PMLA advisors who can understand the entire matter and provide the right legal remedy to challenge such arrest by proving that there was no reason to believe or substantial material for such arrest.

The matters of money laundering are highly sensitive in nature to the high financial impact they have on the economy. Arrest under PMLA is, therefore, kept separate from the provisions of the CrPC in order to give the ED officers sufficient power to immediately arrest an accused. However, there may be cases of wrongful or erroneous arrests under the law, and therefore, it is important to understand the rights that an accused has and the procedure that the arresting officer follows in arrest cases to ensure that no rights or liberties of an individual are infringed upon.

Read Our Article: Deliberations in SC on provisions related to arrest under PMLA

She holds extensive experience in content development and research in the finance, economics, legal and business domain. A stickler for detail, she curates her content putting her financial and legal acumen to use and conducting a detailed analysis of latest economics, business and financial trends.

Deliberations in SC on provisions r...

The Supreme Court of India (SC) is hearing a batch of petitions wherein plea has been taken by...

Detailed Breakdown of Scheduled Off...

Concealment of wealth, whether earned legally or illegally, is not new. To curb this practice o...

Commonwealth Games are an international sports event held between the commonwealth nations ever...