State Moneylending Acts Shall Not Apply To NBFCs: SC Ruling on NBFCs 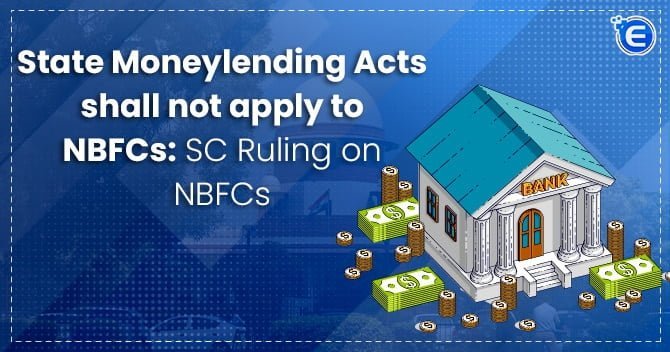 The Supreme Court of India recently stated that state enactments such as Kerala Money Lenders Act, 1958 and Gujarat Money Lenders Act, 2011 shall have no application to NBFCs regulated by the Reserve Bank of India. It is a ruling that will impact similar cases involving other state governments also. In this article, we shall discuss the facts of the matter and also dissect the SC ruling on NBFCs.

Background of the Matter- SC Ruling on NBFCs

The Kerala government had insisted NBFCs to secure license under the Kerala Act. Challenging this move, NBFCs filed multiple writ petitions before the Kerala High Court seeking a declaration that NBFCs registered under the RBI Act shall not fall under the purview of the Kerala Act.

In Gujarat, the Bombay Money Lenders Act 1946, applicable in the state of Gujarat was invoked by registrar in the office of the Prevention of Money Lenders against NBFCs in the state. The high court of Gujarat disagreed with the Kerala High Court stance and allowed special civil applications holding that Gujarat Act 2011 is ultra vires the constitution for legislative incompetence, to the extent that it desires to have control over NBFCs registered under RBI Act. The Gujarat High Court restrained the state government from applying the provisions of Gujarat Act against the NBFCs that are registered under the RBI Act.

Referring to the scheme of Chapter III B of the RBI Act, the bench observed that the scheme provides that the power of intervention available with RBI over NBFCs, is from cradle to grave. In other words, NBFCs cannot carry out business without being registered under the RBI Act. Further, an NBFC that takes birth with registration under the Act shall also be wound up at the instance of the RBI. So the Supreme Court asserted that the entire journey of an NBFC from womb to the tomb is also regulated and monitored by the Reserve Bank of India.

Chapter III B of the Act prescribes a supervisory role for the Reserve Bank of India to oversee the operation of an NBFC right from the start that is their birth till the time of their death that is winding up, all activities of NBFCs automatically fall under the scanner of RBI. Therefore, the aspect relating to taking care of the interest of the borrowers which is sought to be achieved by the enactments of the state gets subsumed in the provisions of Chapter III B.

The court said that RBI usually leaves it to the market to determine the interest rate without any direct intervention however the state of Kerala cannot take advantage of this and prescribe the maximum rate of interest chargeable by Non-Banking Financial Companies on the loans advanced by them.

The court observed that assuming that the Kerala Act was valid in its application to NBFCs when it was made, on the basis that the business of money lending is traceable to entry 30 of list II, it must give way for parliamentary enactment.

Implication of SC ruling on NBFCs

The ruling of the court has now made it clear that only RBI has the power to regulate NBFCs which eliminates dual regulation concept. The states of Kerala and Gujarat cannot argue that the laws introduced by them are in addition to the provisions of chapter III B. The court observed the role of NBFCs which is crucial to the financial health of the country. Additionally, the court also stated that the RBI can supersede the NBFC board and can wind up an NBFC as well.

This ruling from the court puts to rest the tussle between the state and the RBI on aspects related to regulation of NBFCs in the country. There were instances of state government intervening in the NBFCs functioning citing moneylending act of the state which led to issues. It has created regulatory confusion and uncertainty in many states including Gujarat and Kerala. Now that the Supreme Court has clarified the regulatory functioning of NBFCs, such confusion and uncertainty can be done away with in the future.

The Supreme Court stated that while the state enactments regulating the money lending business has just one focus that is to protect borrowers, the RBI Act takes a holistic approach to the business of banking, money lending and operation of currency and credit system of India. The Court held that no NBFC can commence or carry out business without securing NBFC Registration under the RBI Act. Further their continuation of the business shall depend upon the NBFC Compliance with the RBI Act and circulars issued from time to time.

Read Our Article: Lending cap on NBFCs: Will it be beneficial for small players?

NBFC Factoring: What is Factoring a...

On 23rd February 2018, The Reserve Bank of India announced an ombudsman scheme for the purpose...