Significance of Foreign Direct Investment under the Approval Route 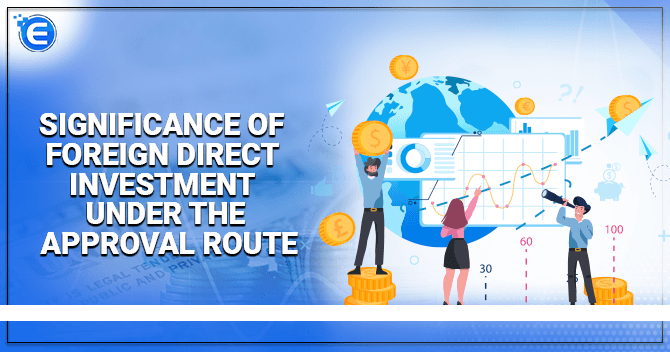 Foreign Direct Investment means an investment which has been by a foreign company or individual into the business of another country. FDI comes into the picture when the investor invests in the foreign business operations or acquires the assets of that foreign company, or does merger and acquisition with that company. This article describes the Significance of Foreign Direct Investment under the Approval Route.

There are three types of foreign direct investment such as horizontal, vertical, conglomerate etc.

The FDI can be opened various ways like, opening of associate company, subsidiary company in the foreign country, acquiring interest in the company or by merger and acquisition in that company.

An investment by the APPLE Company in China for the year 2017 for $507 million investment, to boost research and development work for Apple.

India has relaxed its FDI rule where it has permitted of 100percent FDI in specific sectors.

Since 1999, the government has been making efforts to ease the process of investing in India.  They have since 1999, various amendments and introduced changes in the foreign direct investment approval route. In 2016, India has been ranked 9th in terms of FDI inflows by UNCTAD as the top attractive destinations for inbound investment in the world.

The legislators in India, in order to promote foreign direct investment, have changed the FDI approval route and the framework, which is much more transparent, clear, and flexible.

The Foreign direct investment approval route has been amended in India, which was earlier an inter-ministerial body. It has been replaced with the DIPP (Department of Industry Policy and Promotion).

Read our article:What is meant by FDI Approval Route in India?

Where the investment is under the approval route:

The Indian company requires approval of the Authorised Dealer, Category-I bank, with the application in the form –ODI and the prescribed documents affecting the remittances towards such investments.

Sectors in which Government approval is required:

As per the Press Note 3, it has amended the FDI Policy which clarified that the investments from Pakistan and Bangladesh, a non- resident was permitted to invest in India as per the terms of the FDI policy without the prior approval under automated route, except for the limited purposes. Before this notification of the government, the investment from the border nations could be done or where the investment of the beneficial owner is situated or he is a citizen of a border country, were only allowed via Approval route.

This has been shift from the approval to an automated route.

Press note 3 has been a direct for all the border countries, which means that, for any direct or indirect investment or transfer of ownership of existing or future FDI in any Indian Entity, resulting in change of beneficial ownership, requires previous approval/ government approval but falling in the category of geographic restrictions.

Aim of government approval in the notification

The idea has destroyed India’s relation with the other border countries such as Nepal, Bhutan, with whom the government enjoys excellent trade relations, strong bilateral trade. Such trade relations will be under now, government approval route for the FDI.

Challenges of Enforcement of Foreig...

The New York Convention for enforcement of arbitral awards is an international convention, whic...

The recent amendments to the SEBI’s Listing Obligations and Disclosure Requirement Amendment...