Guidelines on Master Circular for Foreign Investment in India (Part-I) 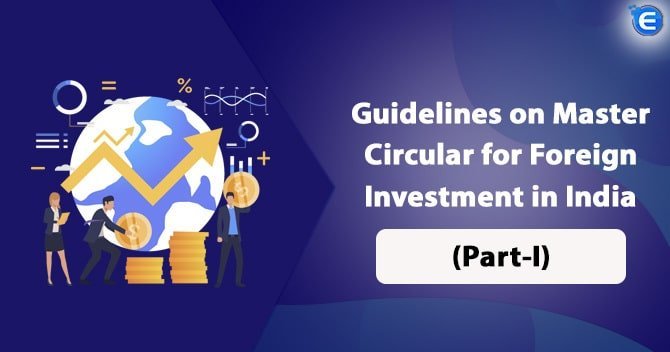 The RBI, from time to time, brings up notifications and circulars for foreign investment in India. Out of the notifications and circulars, the master circular is one of the main amendments to foreign exchange regulations. The master circular on foreign investment in India has been developed from time to time by the RBI.

RBI gives directions to authorized banks/authorized dealers (category-I) for carrying out transactions related to foreign investment in India. The 2015 master circular is divided into two parts. Part I covers the Schematic representation for foreign direct investment.

Part I of the Master Circular covers the following:

Section I of the Master Circular- Foreign Direct Investment

Foreign Direct Investment must be differentiated from Overseas Direct Investment. FDI is considered as direct investment by a foreign company, a non-resident Indian, a foreign wholly-owned subsidiary in an Indian entity. The scheme of FDI in India was brought out by the Department of Industrial Policy and Promotion (DIPP). Apart from this, the Government of India, Ministry of Commerce and Ministry of External Affairs have guided the applicability of foreign direct investment in India.

Under the FDI policy, foreign companies are allowed to subscribe or purchase shares of an Indian company. The government would require prior approval under specific sectors.

A foreign entity can acquire the following securities on an Indian company under foreign direct investment:

There are two routes for investing in India. The following are the routes prescribed by the government:

Investments under this are also allowed by Erstwhile OCB, which is formed outside India. However, the investments made by Erstwhile OCB have to be according to the prescribed RBI guidelines. For this purpose, a certificate is required from the RBI.

Foreign direct investment is allowed for securities such as equity securities, convertible notes, and CCPS. Usually, the above instruments are only issued to a non-resident investor or a foreign company for FDI. Under the routes of FDI, the Indian company would generally offer an optionality clause to the foreign company.

The optionality clause will include the following:

Pricing Guidelines for FDI under the Master Circular

The pricing of securities must be under the standards which are governed internationally. Pricing for shares and securities is different for listed and unlisted companies.

The following are the prices:

The following are the methods used for subscribing to shares in an Indian company:

What are the modes of transfer of shares under FEMA?

An Indian company can transfer shares to a foreign investor. Apart from this, shares can also be transferred from a resident in India to a person resident outside India.

The shares can be transferred to the following parties.

A portfolio is considered as a cluster of securities in a registered stock exchange. Stock exchanges in India are governed by the Securities and Exchange Board of India. The law which regulates stock exchanges in India is the Securities and Exchange Board of India Act, 1992. Therefore foreign investment under a portfolio has to comply with the requirements of the RBI and the SEBI. Any form of foreign investment in a portfolio is called as Portfolio Investment Scheme (PIS).

The following foreign entities are allowed to invest under the Portfolio Investment Scheme:

For the operation of the portfolio investment scheme, the investors have to operate as per the requirements of the RBI.

There are particular conditions which have to be followed for investment under the portfolio investment scheme:

Under the Master Circular, portfolio investments are only specifically for entities that are registered under a recognized stock exchange.

Investment by a Foreign Venture Capital investor would be subject to approval from the RBI. They would also be subject to sector caps from the prescribed regulatory authority.

An IVCU is understood as an entity or a company that does not have its shares listed in a recognized stock exchange. Apart from this, the IVCU does not take part or have any form of negative activity listed under the SEBI regulations. A Venture Capital Fund can be understood as a trust or a corporation that is registered under the Securities and Exchange Board of India (Venture Capital Fund) Regulations, 1996, which has a cluster of securities as per the SEBI regulations. The fund also invests in different venture capital undertakings as per the regulations.

Mode of Operation of FVCI under Master Circular

When approval for operating is given to the FVCI, the RBI will request the FVCI to open a non-resident bearing rupee account with the authorized bank category-I. Authorized banks are allowed to provide forward cover to the FVCI for inward remittance from the FVCI.

Section IV of the Master Circular- Investment in other Foreign Securities

Non-resident Indians are also allowed to invest in other securities. The proceeds from the investment in the above securities will be either repatriable or non-repatriable.

NRIs can purchase and acquire the following on a Non-Repatriable Basis:

NRIs are not allowed to make any form of investments in Small Savings Schemes, including the Public Provident Fund.
For non-repatriable investment, the sale proceeds will be credited to the NRO account.

NRIs can purchase and acquire the following on a Repatriable Basis:

Payment shall be made for the acquisition of such securities through normal banking channels.

This section of the Master Circular speaks about the compliances required for FDI and PIS.

Some of the reporting that is required to be carried out by the Indian Company is as follows:

A resident Indian is allowed to maintain foreign exchange outside India. An individual must mai...

Options for Exiting from a SEZ Unit...

In the year 2000, the Government of India established a scheme for setting up of business zones...