Analysis on Types of Foreign Investment in India: FPI, FDI and FI 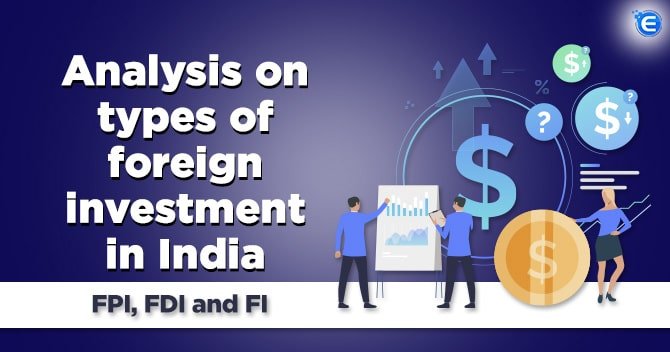 Overview of Investment in India

Foreign companies established their footprints in India either by setting up branch offices and representative offices. These moves by foreign companies increased the gross domestic product of the country. It also promoted healthy competition amongst domestic companies and international companies. All the types of foreign investment in India have contributed to the development of foreign exchange reserves in the country. Over the years, the types of foreign investment have grown into different forms of capital contribution to the economy.

According to the International Monetary Fund (IMF), the Gross Domestic Product of India has risen to 7%. Sources say that this percentage is supposed to remain constant.  In the year 2017-18, the GDP of India was steady at 7.4% and 2018-19; the GDP reduced to 7.3%. The effect of COVID-19 has drastically reduced the amount of economic activity in India. The government of India has brought out stringent changes in the Foreign Direct Investment Route in India due to the lockdown.

Neighbouring countries that share borders with India are supposed to take approval under the government route before investing in particular sectors. This was a radical change due to the increased ownership percentage in HDFC by Peoples Bank of China[1]. Sources say that the gross domestic product was supposed to be more than 7%. However, the effect of COVID-19 has significantly reduced this chance of reaching the minimum average GDP.

Since the liberalization of the markets in India, there has been a significant outflow of funds from India. Because of this, foreign reserves have reduced in India and only increased the importing patterns of the country. However, this has changed over the years. India is one of the attractive destinations for foreign investment. There are a vast amount of options and alternatives given to foreign investors to invest in India. The types of foreign investment in India are the following:

A foreign portfolio investment is a foreign investment which is done in a pool of securities. These securities would be regulated under the Companies’ Act 2013, Foreign Exchange Management Act 1999, and the Reserve Bank of India. This form of investment is made through foreign investors in securities that are listed in the stock exchange. Apart from this, investments can be made in other securities. This framework is considered as the FPI framework. This framework is regulated by the securities exchange board of India (SEBI). SEBI is the primary authority for controlling the securities market in India. Therefore Foreign Portfolio Investment (FPI) would come under the purview of SEBI.

According to the Securities Exchange Board of India (Foreign Portfolio Investment) Regulations, 2014, the license for FPI registration can be obtained through the following procedure:

An investor to invest in Foreign Portfolio Investment has to make an application to the concerned authority. This application has to be made in the format as required. The applicant has to also submit the prescribed documents to the authority. This method is necessary to obtain the FPI Licence.

After this step, the Designated Depository Party (DDP) acts as a local custodian of the SEBI would scrutinize the application for being registered as an FPI. After examining the application, the DDP would grant a license to the applicant to be a registered FPI.

The application is made in a particular format. Based on the background of risk that is taken by the investor, the following would be the categories which the investor can consider for the investment:

The investors who come from Category II and Category III require information on the executives of the company. A natural person’s information would be provided for identifying the individual as the Beneficial Owner (BO) of the FPI.  The information regarding the BO must be provided to the local custodian.

When it comes to equity securities, an FPI is only permitted to invest in listed equities. Investment, which is made by a pool of FPI, should not exceed 10%. This means that a foreign portfolio investor should not invest more than 10% in a listed entity. The investment should not be more than 10% of the paid-up capital of the listed entity.

For a private sector bank, the amount of percentage is limited to 5%. If such control would go more than 10%, then the foreign portfolio investment would be converted to foreign direct investment, and it would come under the authority and regime of the RBI. Hence different types of foreign investment have certain compliances to be followed.

Proceeds of the sale, which are made in India and outside India, can only be realized once the tax has been paid. Borrowing funds in India is not allowed for an FPI. An FPI cannot earn interest. When it comes to taxation of a Foreign Portfolio Investor, then every FPI is required to obtain Tax Identification. They also have to submit annual returns.

In a commentary and white paper which was issued by the RBI, the following points were observed:

Fully diluted shares are the shares, which are outstanding shares. These shares would be allowed to be traded in the market after they are converted. Capital instruments are shares, bonds, preference shares and debentures. These instruments have to be compliant with the laws related to Foreign Exchange Management Act 1999.

FDI is one of the types of foreign investment which can be made through the above routes.

Procedure for investing in the Automatic Route- Types of Foreign Investment

Foreign Investment is an investment made by an individual outside India. The following have to be satisfied for foreign investment:

See Our Recommendation: Chinese Investment in India under the Government Approval.

What are the Dividend Options and G...

Mutual fund (MF) is one kind of financial scheme where the smallest of small investor can inves...

Q. 1) What is Multi-State Cooperative Society? Ans.: Any society formed with the object of the...