An Overview on Rules Regarding Nidhi Company 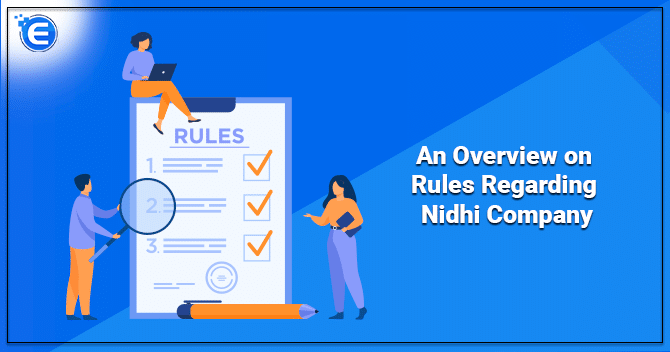 Nidhi Company is a type of company which accepts deposits and lend money to its members only. Under this, profit earned by members of the Nidhi Company is shared among themselves. Nidhi Company can only be registered as a public limited company. It falls under the purview of Non-Banking Financial Institution or an NBFC. In this blog, we will talk about the rules regarding Nidhi Company registration.

The main object of the Nidhi Company is cultivating the habit of thrift and savings amongst its members, receiving deposits from, and lending to, its members only, for their mutual benefit.

As per Nidhi Rules, 2014 it is required for every Nidhi Company to ensure the following:

(a) Not less than two hundred members;

(c) Unencumbered term deposits of not less than 10% of the outstanding deposits as specified in rule 14;

(d) The ratio of Net Owned Funds to deposits of not more than 1:20.

(e) Nidhi Company is not allowed to admit a body corporate or trust as a member.

(f)  In Nidhi Company, it shall ensure that its membership is not reduced to less than two hundred members at any time.

(g) Minor shall not be admitted as a member of Nidhi Company.

As per Rules, a Nidhi Company cannot carry on any of the following activities:

Nidhi Company is allowed to open branches in case it has earned net profits after tax during the preceding three financial years. They are allowed to open up to three branches within the district. Nidhi companies are not allowed to set up branches outside the state where its registered office is situated.

No branch office can be closed unless it publishes an advertisement in a newspaper in vernacular language in the place where it carries on business at least thirty days prior to such closure, informing the public about such closure and intimation is given to the Registrar within thirty days of such closure.

In case of Loans-

In the case of Directors-

In the case of dividend

Nidhi companies shall not declare dividend exceeding twenty-five percent or such higher amount as may be specifically approved by the Regional Director for reasons to be recorded in writing and further subject to the following conditions, namely:-

(a) An equal amount is required to be transferred to the General Reserve;

(c) It has complied with all the rules as applicable to Nidhi companies.

In case of Auditor

As Nidhi is a type of NBFC, RBI can issue directions to them in deposit acceptance activities. The companies that do Nidhi business are known under different names like Nidhi, Benefits fund , mutual benefits fund etc. In case you have any query related to rules regarding Nidhi Company, contact Enterslice.

Read our article: Checklist for Audit of Nidhi Company

Conversion of a Nidhi Company into...

The article speaks about the conversion process from a Nidhi company into a full fledged NBFC C...

A Nidhi Company is one of the types of Non-Banking Financial Company (NBFC) recognized under Se...

A Brief Comparison on Nidhi Company...