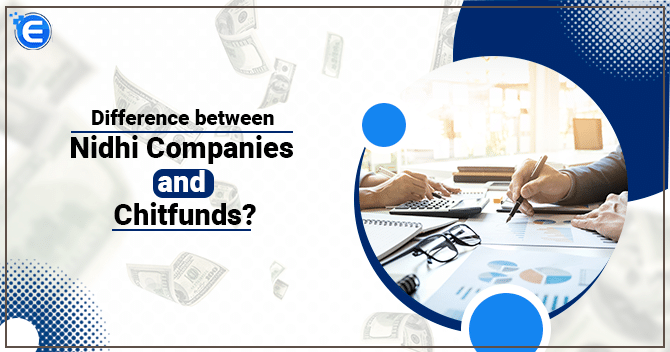 The essential difference between Nidhi Company and Chit Funds is discussed in this article. Let’s start with a fundamental knowledge of what a Chit Fund and a Nidhi Company:-

The Hindi word “Nidhi” signifies “funds” or “finance”. Nidhi refers to a corporation that was formed to instill a culture of thrift and save among its members, as well as receiving deposits and lending to them exclusively for mutual benefit.

Advantages of registration of a Nidhi Company

There are numerous benefits of registration of a Nidhi Company in India which are given below:-

In India, a chit store is a type of saving plan. A company that oversees, conducts, or supervises chits is known as a chit support company. As foreman, agent, or any other capacity, chits are specified in Section 2 of the Chits Funds Act 1982[1]. As per the Chit Funds Act 1982 under Section 2(b), a chit, also known as a chit subsidize, Chitty, Kuri, or by some other name, is a transaction in which a person enters into an agreement with a stipulated number of individuals, that everyone must subscribe a certain proportion of money (or a certain amount of grain conversely), by method d periodical installments over a specified duration and that each such subscriber may be entitled to the prize money in turn, as decided by part of by auction or by delicate or in any other way stated in the chit agreement.

A Chit Fund is a great financial tool both for saving as well as borrowing. It provides a decent return on investment as a saving tool and as a borrowing plan. It may be a trustworthy source of money in crises and otherwise.

The primary difference here between Nidhi Company and Chit Fund is that a Nidhi Company is an NBFC that can only lend or accept deposits, while the latter, i.e., Chit Fund, is also a committee as a Nidhi Company, but they only accept installments over a fixed timeframe that are paid by its members, and they neither lend nor accept the amount as a whole.

These chit financing programmes may be undertaken by composer financial institutions or unstructured schemes conducted by companies and relatives. There are several types of chits in which savings are created in the economic growth of individuals in a certain place, such as, Kerala, through facilitating access to credit.

This is a typical phenomenon in Kerala, where a substantial segment of the population is engaged in. In Kerala, there is a state – owned corporation named Kerala State Financial Enterprise, whose major economic activity is the chit industry.

Chit Funds are occasionally exploited by their promoters, and there are several examples of the founders operating what is essentially a bogus scheme or Ponzi scheme and abruptly fleeing with their money.

Nidhi Companies are Non-Banking Financial Companies (NBFCs) that can accept deposits and lend money to their customers. Nidhi Company Registration is an entirely online procedure. Nidhi Companies are prohibited from paying a commission on deposits or conducting any type of marketing. Chit Fund Company, often known as the committee, is a form of Indian saving scheme in which members pay a defined payment over a specified timeframe. Chit Funds that are registered are safe since they are governed by the Chit Fund Act of 1982. The Chit Fund Company can only be registered by the state governments under this law. During the registered process, the owner must pay a security deposit of 100% of the chit value to the registrar of chits. If a chit fund business is found to be fraudulent, the Registrar of Chit Funds and the State Government involved can take regulatory action against the chit fund company’s owner. Unregistered chit funds are not safe since they have no legal obligation to reimburse the deposited cash to their subscribers.

Read our article:How NBFC is different from Nidhi and Micro Finance Company?

Acceptance of Deposit by Nidhi Comp...

Public deposit is one of the best ways to raise fund in Nidhi Company however, timely repayment...

An Overview on Rules Regarding Nidh...

Nidhi Company is a type of company which accepts deposits and lend money to its members only. U...

Loan and interest of Nidhi Company:...

This article throws light about the working of Nidhi Company Loan system and charging of loan a...