Receipt of Gifts and Inheritance by an NRI under FEMA 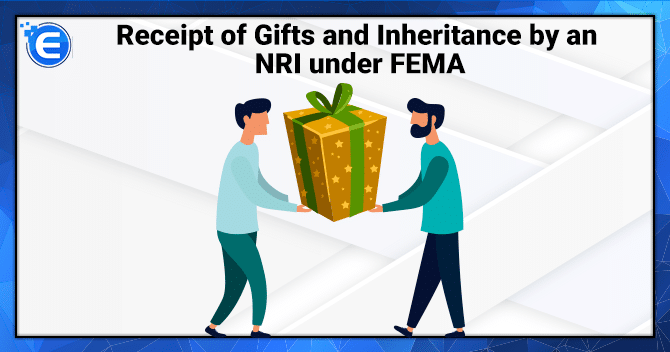 Dealing with real estate matters in India could be a complex task, especially for an NRI under FEMA therefore having a good deal of knowledge about it can be handy. Receipt of gifts and inheritance by a Non-Resident Indian is regulated by Foreign Exchange Management Act and also by Income Tax Act 1961. In this article, we shall discuss regarding assets in which an NRI may have interest which he receives by gift or inheritance.

A Non-Resident Indian can have interest in the following assets which he gets through gift or inheritance:

As stated above, any such receipt through gift or inheritance is regulated by FEMA and also by Income Tax Act, 1961[1].

Let’s now discuss the implication of FEMA on such assets.

A Non-Resident Indian can receive money as gift from a resident Indian under the Liberalized Remittance Scheme within the limit of US Dollars 250000 in a financial year as provided therein.

The donor and the recipient don’t have to be close relatives necessarily. It is permitted under the FEMA provisions, but the gift would be taxable in the hands of the NRI recipient (in case exceeding INR 50000) under the Income Tax Act.

Definition of relative in FEMA to mean definition according to the Companies Act, 2013 which includes spouse, father, mother, son, his wife, daughter, daughter’s husband, brother and sister of the individual.

A gift of immoveable property is permitted even to the NRI who is not a relative, but in case of the Income Tax Act, if the gift is without a consideration and to someone who is not a relative, the receipt of gift is taxable in the hands of the recipient where the stamp duty shall be the basis on which deemed income is computed.

The NRI is permitted to take put the sale proceeds of such properties outside India from his NRO account within the permissible limit of USD 1000000 per financial year. It is also applicable where the property is received by the NRI or PIO through inheritance.

A resident individual may gift the securities held in a company that is registered in India, such as equity shares, debentures, preference share, share warrants, etc. to a Non-Resident Indian subject to prior approval from the RBI (Reserve bank of India).

The following conditions should be fulfilled:

It may be noted that the gift of securities are regulated by the FEMA provisions, which puts a bar to a certain quantum, and prior approval is also required from the RBI, and the parties to the gift transaction should be relatives.

The gift of securities among the relatives are exempt from taxes, but in case it’s among the non-relatives then it shall be taxable where the fair market of such shares is the basis for computing deemed tax liability in the hands of NRI recipient.

A Non-Resident Indian can receive the securities on inheritance, and no such restrictions are there. However, the remittance of sale proceeds should be within the limit of USD 1 million.

Interest in LLP: NRI under FEMA

An NRI can contribute to the capital of a Limited Liability Partnership, but the LLPs should be engaged in sectors where 100% Foreign Direct Investment is permitted under the automatic route.

Prior to receiving funds or assets in India, either through gift or inheritance, an NRI should check provisions under FEMA as well as under the Income tax Act in order to avoid any complication and non-compliance. In case of further query pertaining to receipt of gifts and inheritance by an NRI under FEMA, contact a professional.

Read our article:Acquisition of Immovable Property in India and outside India as per FEMA Guidelines by Foreigners/NRI and PIO

The recent amendments to the SEBI’s Listing Obligations and Disclosure Requirement Amendment...

NRI Bank Account is opened by an individual who is a resident outside India but is an Indian ci...