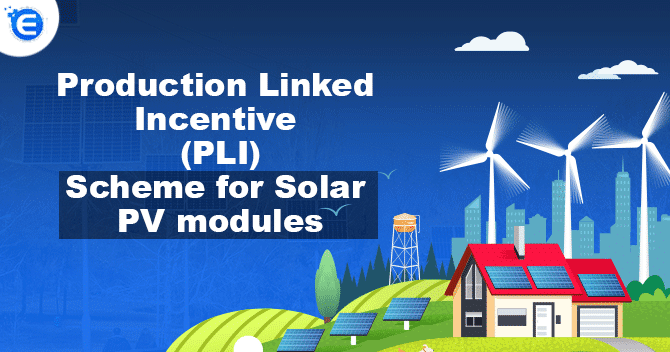 The initiation of PLI scheme for solar PV modules lies in the backdrop of ambitious target set by the Government of India to achieve 500 Giga Watts of Energy from renewable energy resources in order to meet half of the country’s energy needs by the end of 2030. The government wants to achieve this target with solar and wind energy contributing 400 GW and the rest is to be met my Hydro and other renewable resources. This aim is in furtherance to the pledge taken by the Prime Minister of India to achieve net zero carbon emissions by the year of 2070.

In order to achieve this herculean target, the Government of India comes out with a number of schemes in order to make this target achievable and with the help of indigenous efforts and domestic procurement of raw material.

Since a huge chunk of the envisioned target is to be met by solar energy, the government has been coming out of several policies and schemes to give boost to the solar energy sector. One of such schemes to give impetus to domestic manufacturing and increasing the efficiency of solar energy producing apparatus is the recently launched Production Linked Incentive (PLI) scheme for solar PV cells and modules which is known as ‘National Programme on High Efficiency Solar PV Modules’.

What are solar modules and solar photovoltaic cells?

A solar photovoltaic cell or commonly known as solar cell is actually a semi conductor which absorbs light energy when sunlight falls on it and converts that energy into negatively charged electrons. This extra converted energy then flows through the semi conductor material as electric current which can then be used to power any appliance.

A solar cell is a basic unit of a solar module. A solar module is a device that converts the electricity absorbed by the cell into electric energy.

In April of 2021, the cabinet of the government of India approved a budget of 4,500 crores for a Production Linked Incentive (PLI) Scheme  by the name of ‘National Programme on ‘High Efficiency Solar PV Modules’.  Though production of Solar PV cells and Manufacturing modules was already taking place in India, there was a need for increased and highly efficient solar PV cells and solar modules to make India self-sufficient and achieve the gargantuan task of capacity building in renewable energy to the tune of 500 GW.

One of the criteria of the scheme based on which incentives are granted to the companies is the extent of efficiency of the solar cells in generating electric current. Let us understand what exactly do we understand by the efficiency of solar cell.

Efficiency of a solar cell is the degree to which the cell is able to convert the solar light falling on it and convert the same into electrical energy. This indicates how efficient a cell is in converting the light into electric current from one form to another. Further, the amount of electricity that will be produced shall be dependent on the factors such as wavelength and the intensity of the light and the internal attributes of the cell.

Following are the steps that have been part of this policy of the government:

According to the scheme, the manufacturers will be selected on the basis of online bidding process and incentives will be disbursed over a period of five years once the manufacturing plant gets commissioned and starts making sales on the highly efficient solar PV modules.

The incentives will be based on the level of efficiency achieved and sourcing of the raw materials from the domestic markets. This PLI scheme will certainly increase the module efficiency and boost domestic production.

When the scheme was launched in April 2021 with an expenditure of Rs. 4,500 crore, it was envisaged that an additional capacity of 10,000 MW from high efficiency PV modules shall be generated. Now that the investment from the government alone has increase almost six folds, the energy generation capacity will skyrocket fulfilling the national mission of achieving the 500 MW of renewable energy.

Advancements in Research and Development

At the time of launching the scheme the government aimed at increasing employment to 30,000 people directly and 1.2 lakh people indirectly. Now that the government has increased the budget from 4,500 crore to 24,000 crore, the employment rate will definitely shoot up giving much required employment to the people.

Since the incentives of the scheme are linked with the procurement of the raw materials from the domestic market, it will certainly give a great fillip to the domestic industry and at the same time enhances its capacity building.

With the increase in the investment by the government to the tune of Rs. 24,000 crores, there is strong potential for India to start exporting solar equipments and make India self sufficient in the solar equipments.

Though the PLI scheme of solar PV modules was brought out in April of 2021 with 4,500 crores but owing to the demand from the other companies who could not keep pace with the bidding process, now the government in November of 2021 raised the outlay to Rs. 24,000 crore. This increase will serve twin purpose for the government i.e. to reduce dependence on imports in a strategic sector like electricity and achieve ‘atmanirbharta’ or self sufficiency and also for the purpose of increasing the exports from the country.

Introduction and Types of Internati...

The (IBE) International Business Environment is multidimensional as it involves various things...

Investment banking & capital markets go along hand in hand. Each plays a role in the adviso...