Will India Celebrate an Eco-Friendly Diwali? 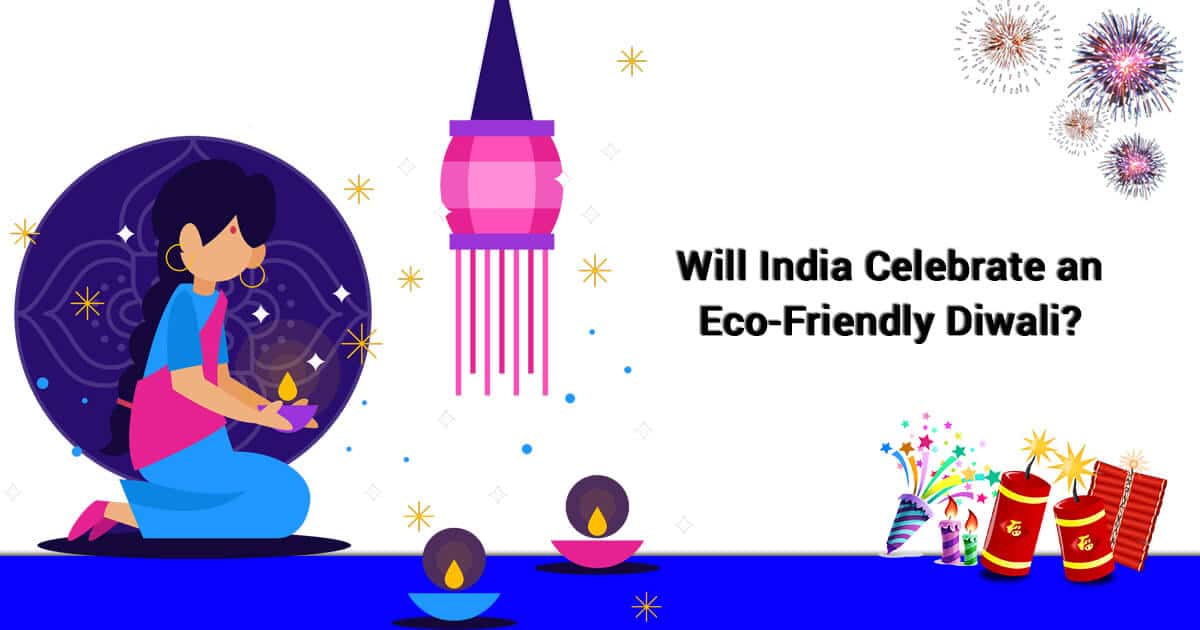 India’s Health Minister Mr. Harsh Vardhan unveiled a line of “green” firecrackers with some of the country’s top scientists. This move focuses on reducing the pollution level, which escalates in our country every year after and during the Diwali season. A step towards an Eco-friendly Diwali

Diwali, “the festival of lights,” is an ancient Hindu festival celebrated in autumn every year. One of the most popular festivals of India, Diwali is celebrated with utmost joy and abundance throughout the country. Millions of people ignite firecrackers, sparklers, and other fireworks during the night of Diwali, resulting in an increased level of pollution. Major cities of India are already going through serious pollution problems, and this problem gets escalated even more during the Diwali season.

At present, 22 out of the 30 most polluted cities of the world are in India. Pollution in some of the major cities has reached alarming levels. Some days the air quality deteriorates down to the scale, which is equivalent to smoking two packs of cigarettes a day.

While addressing an event organized by Council for Scientific and Industrial Research (CSIR), India’s health Minister Mr. Harsh Vardhan, presented a line of “green” firecrackers to curb the menace of pollution in our country. “We had appealed to our scientists to come up with an alternative to the polluting firecrackers so that people’s sentimenet is taken care of without harming the environment,” Harsh Vardhan said.

The approved firecrackers by the government include pool- ball-sized “Flower-pots” and few types of sparklers. These firecrackers are made by cutting out barium nitrate, a chief polluter, and using materials like zeolites, minerals that help absorb nitrogen and sulfur emissions.

According to Mr Harsh Vardhan and scientists at CSIR, these eco-friendly firecrackers will be available in the market for Diwali at a lower price as compared to other polluting crackers. New- fireworks would resolve the crisis of air- pollution, slash emission by 30%, cut down on noise said, Mr Vardhan

Effects of Eco-Friendly Diwali on the Firecracker Industry

Nearly a billion-dollar firecracker industry of India has been in distress after the Supreme court’s ban on crackers. Now, the government is hopeful about the revival of this industry after it introduced the line of “green crackers.” Although, the ground reality doesn’t look that promising as the government suggests. Many manufacturers are scrapping up their fireworks business to and making a shift to other businesses because of the loses they have been facing over the years. Green crackers are still not easily available in the market, even after the government has been passing out licenses for the production of green firecrackers.

Need for an Eco-Friendly Diwali

Every year, the pollution level in our country has been increasing by leaps and bounds. The situation is critical when 22 out of the 30 most polluted cities of the world are in India. During winters, the situation gets even worse when pollution prone cities get blanket under the layer of smog. Many people are dying because of the increased level of pollution. People are compelled to breathe in the toxic environment, resulting in serious respiratory problems.

Now, its high time that we realise the importance of our environment, and take some substantial steps to preserve it. As “It’s never too late to make a start”, this line applies to the people of India. We need to understand the fact that the present situation of the environment in most of our cities is critical. The government cannot achieve it’s goal of purifying the air without the support of common people. Every citizen of the nation will have to step up and take steps on their part to curb this menace of pollution.

What is Diwali without crackers? This is one common question of the people of our country. However, alarming levels of pollution in our country contradict this question. Pollution level in some cities of India has risen up to dangerous levels, where even breathing has become difficult. This year the government has made an effort to turn this Diwali into an eco-friendly one by introducing different varieties of “green” crackers. However, for this decision to be in proper effect, every citizen will have to make some effort to turn this regular Diwali into a clean and green Diwali.

Every private Company needs to comply with the Companies Act 2013 requirement and hence timely...

The Apex court of India on October 14th, 2020 rejected to permit the government one month to ex...

Union Budget 2017-18, presented by the Finance Minister, had some of the exclusive areas for a...