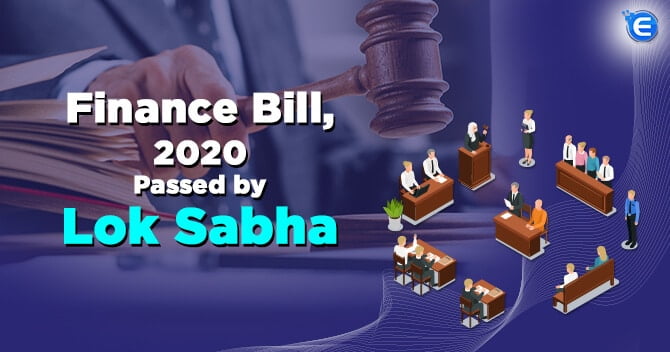 The Budget session was adjourned on 23rd March 2020 in wake of virtual lockdown amidst the outbreak of Covid-19, after passing the Finance Bill 2020 by Lok Sabha. The Finance Bill was passed by a voice vote without any debate or reply by the Union Finance Minister Nirmala Sitharaman. Lok Sabha speaker Om Birla and Rajya Sabha chairman M. Venkaiah Naidu met the political leaders on the first half on Monday to discuss that the finance bill was passed before the adjournment of Parliament. The opposition created ruckus in the house seeking a fiscal stimulus package or coronavirus outbreak.

This Act will be known as the Finance Act, 2020. Sections 2 to 104 will come into force from 1st April 2020. Section 116 to section 129 and also section 132 shall be enforced on such date as the Central Government may publish it in official Gazzette.

A complete analysis of the amendments to the finance bill 2020 or finance act, 2020 is discussed in this article.

What are the Key Changes made in Finance Bill 2020?

Some of the Key Changes made in the Bill are as follows:

What are the Basic Amendments Made in Finance Bill 2020?

The amendments made in finance bill 2020, which was passed in Lok Sabha in 23-Mar-2020 are discussed below:

Changes Made in the Residential Status

The concession period for a stay in India for an Indian citizen and a person of Indian origin shall be reduced from 182 days to 120 days as prescribed in Section 6 of the Income Tax Act.

Note- For this provision, income from other sources means income which accrues or arises outside India except income derived from a business controlled in India or a profession set up in India

(I) Sum received or receivable by a non-resident Indian for online advertisement services rendered to specified persons.

(ii) Sum received or receivable by an e-commerce operator from e-commerce supply of goods or services to specified persons.

(i) Sum received or receivable by a non-resident for services rendered online advertisement to specified persons.

(ii) Sum received or receivable by an e-commerce operator from the supply of goods or services to specified persons.

(i) 2% from the amount withdrawn in cash if the amount in withdrawal exceeds Rs.20 lakhs during the previous year.

(ii) 5% will be charged in case the withdrawal amount exceeds Rs. 1 crore during the last year.

Amendment in Provisions in TCS to Remove Certain Ambiguities

Central Government Empowered to Lower Rate of TDS under Section 194A

Scope of Deduction under Section 80M for Inter-corporate Dividend Expanded

With effect from 1st April 2020, the Dividend Distribution Tax or DDT is proposed to be abolished and will be required to be moved under the traditional system of taxation wherein companies are not required to do DDT on dividend, and the shareholders are liable to pay tax on such income at the applicable tax rate.

Around forty amendments were passed in the finance bill,2020. Against the backdrop of the coronavirus outbreak situation, the Minister of State for Parliamentary Affairs Arjun Ram Meghwal said it as an extraordinary situation and that the decision to pass the bill without any discussion was taken at an all-party meeting. Later in the evening of 23rd March 2020 Rajya Sabha returned the bill which will now go to the President for his assent and then will become a law.

How Foreign Portfolio Investors can...

India has become one of the most rapidly developing nations and a preferred investment hub in t...

DAAB (Digital Accounting and Assurance Board) constituted by ICAI to find a solution of all the...

Owing to the face-off between the Indian and Chinese army over the disputed LAC, the Government...