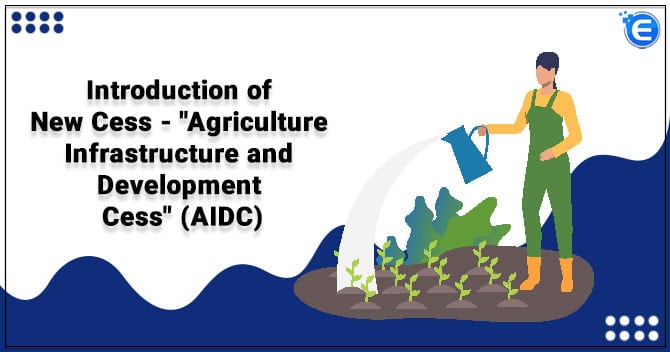 In the last budget proposals, clause 115(1) of the Finance Bill 2021 introduced the Agriculture Infrastructure and Development Cess on goods specified in the first schedule to Customs Tariff Act, 1975[1] imported into India. Further, in clause wise explanation in the Memorandum, it was clarified that to avoid additional burden due to the imposition of AIDC, the basic customs duty rates are lowered on products on which cess is imposed.

What is Agriculture Infrastructure and Development Cess?

The AIDC is a tax that the government imposes on the commercial production of the agricultural produce. The charge rate depends upon the production capacity. The money collected by the government through the AID Cess will be utilized for the infrastructure development in agriculture across the country.

In simple words, the government requires funds in order to develop infrastructure and to carry out different projects. The government collects these funds from commercial production across the country in the form of tax or cess.

What is the importance of Agriculture Infrastructure and Development Cess?

The importance of levy of the new AIDC comes from its usage and implication. This cess would be used for a specific purpose that is to improve infrastructure development in agriculture across the country by enhancing production and by protecting this sector from undue competition, and also by enhancing its output competently.

With an urgent need of developing the agricultural infrastructure, the introduction of AIDC comes at a time where the Centre has sent a message to the farmers to improve their condition.

Why are states unhappy?

States are not amused because, with this cess, their revenues will take a hit due to the restructuring of taxes announced in the budget. It is worth mentioning here that the collection from the Agriculture Infrastructure and Development Cess will not form a part of the divisible central and is out of their reach. The impact of this levy would be offset by an equivalent or more reduction in other central levies, for states, this set off means that they would lose out on shares in central revenue.

Likewise, adjustment has been made for alcohol that presently attracts 150% basic customs duty that has been reduced to 50% to nullify the impact of 100% levy of the AIDC.

Therefore instead of consumers, it is states who are concerned over the levy of the new cess as they would get less money in line with the devolution formula. However, the centre assured that the amounts lost to states won’t be sizeable, and in fact, states would benefit through levy of this cess as the spending would be earmarked for the states.

Will the Agriculture Infrastructure and Development Cess impose an additional burden on consumers?

There would be no additional burden on the consumers as Finance Minister Nirmala Sitharaman, in her budget presentation, proposed to reduce Basic Customs Duty on these items. Therefore the amount levied as AIDC on petrol and diesel would be counter balanced by an equal reduction in Basic Excise Duty and Special Additional Excise Duty to the same extent, thereby ensuring zero impact on fuel.

Other items with AIDC

The AIDC cess would be levied on other items such as Gold and silver dore bars, crude palm oil, crude soyabean oil, Kabuli chana, apples, Bengal gram etc. All these items are those that might not majorly impact a huge part of population. There could be customized hike on cotton to 10% and on uncooked silk and silk yarn to 15%. In the price range, the end use based concession on denatured ethyl alcohol stands withdrawn. Custom charges are uniformly introduced as much as rice bran oil cake and animal feed components. The Finance Minister stated that the levies are on a small set of things, and care has been taken to ensure that the impact is minimal.

With a view to improve the agricultural infrastructure, the finance minister introduced the Agriculture Infrastructure and Development Cess this year. However, the FM stated that there won’t be any additional burden on consumers as the basic customs duty rates have been reduced on some items.

Read our article: All about the Amendments in Custom Duty in the Budget 2021-22

The purpose of the GST regime is to benefit both the buyer and the seller and make compliance e...