Procedure of Inquiry under POSH: An Overview 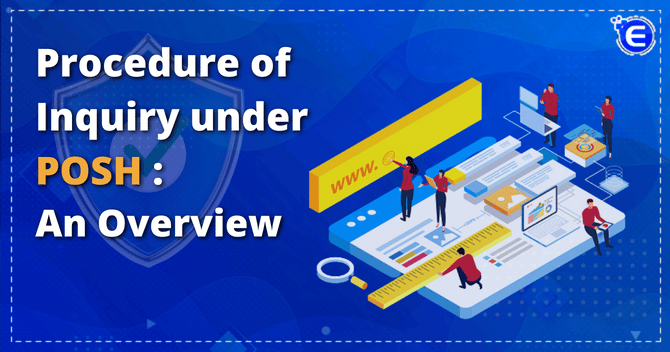 Sexual Harassment at workplaces is a predominant concern in India, and such harassment is not only a sheer violation of the fundamental rights of women but adversely affects their physical and mental health. The Sexual Harassment of Women at Workplace (Prevention, Prohibition and Redressal) Act, 2013 (POSH Compliance) was enacted to address this issue through providing a provision of the constitution of the Internal committee for the redressal of complaints under sexual harassment, but the major issue with such redressal is the ambiguity about its inquiry procedure.

This article discusses the Procedure of Inquiry under POSH to provide clarity about the same and provide relief to the aggrieved women at the time of inquiry.

Who is Responsible for Inquiry under POSH?

The responsibility of conducting the inquiry under POSH falls upon the Internal Committee or the Local Committee. Section 4 of the POSH Act provides that every organisation employing ten or more employees must constitute an Internal Committee for the redressal of the complaints of sexual harassment.

In the matter of Global Health Private Limited & Mr Arvinder Bagga v. Local Complaints Committee, District Indore and Others (2017), the Hon’ble court held that there should be a fine imposed under the POSH Act on the organisations for failing to constitute the Internal Committee.

The presiding officer shall be a senior-level female employee who would serve as the chairperson of the committee.

The committee shall also include two or more members having decent legal knowledge, experience in social work or commitment to the cause of women.

The external member shall be the person who is not associated with the organisation. The person should be from an NGO or association committed to the cause of women or familiar with issues related to sexual harassment.

Key Responsibilities of the Internal Committee

The responsibilities of the Internal Committee are enlisted below

Disqualification of Members of Internal Committee

In the circumstances mentioned above, the committee will be obligated to appoint a new member as a replacement.

Legal implications regarding the improper formation of the Internal Committee

The POSH Act has stringent provisions regarding the constitution of the internal committee, and an organisation would be compelled to bear dire consequences for the improper formation of the same.

The legal implications for the improper formation can lead to the dissolution of the internal committee by the court, followed by the direction to the organisation for the reinstitution of the committee with strict compliance with the POSH Act, implying that the complaints would undergo a fresh inquiry by the newly formed Internal Committee.

In case of business with regard to the constitution of the committee or the inquiry procedure, the complaint may be assigned to a competent authority such as the Local committee in respect of the continuance of inquiry under the POSH Act.

The penalties for the improper formation of the internal Committee are –

Upon finding that the external member didn’t possess the relevant qualification for the position, the High Court of Delhi invalidated the internal committee’s constitution, set aside the committee’s proceedings, and further directed to reconstitute a new committee and begin the inquiry afresh.

The High court of Madras rejected the report of the internal committee of an educational institution that comprised only the members of the administrative department on the grounds that the committee was not constituted as per the provisions of the POSH Act. The institution was directed to constitute the committee in consonance with the Act and submit the report after hearing from the relevant parties again.

What is the Procedure of Inquiry under POSH?

The procedure for inquiry under POSH can be divided into 3 segments, namely –

Determination of the allegation of Sexual Harassment

The first step in the pre-inquiry procedure is prescribed u/s 9 of the POSH Act, i.e. ascertaining whether there was an occurrence of sexual harassment as alleged by the complainant. The following pointer must be considered for ascertaining the same –

The criteria mentioned above were provided in the case titled Shri Debdulal Maity vs National Insurance Co. Ltd. & Ors, WP No.728 of 2014

The internal committee may pass an order of interim relief if necessary, even before initiating the inquiry under POSH at the complainant’s request. For instance, the temporary relief may include an order for a change of department, long leaves, transfer or change of workplace; such orders are passed with the intention of safeguarding the aggrieved women from further suffering.

The statement and details of the conciliation should be recorded by the internal committee and forwarded to the employer for necessary compliance. The copies of the same must be sent to both parties, i.e. the complainant and the respondents, accordingly.

If the matter is not settled through conciliation, the internal committee shall proceed with initiating the inquiry under POSH as per the procedure prescribed under section 11 of the POSH Act 2013[1], which is elaborated below-

In a different matter, Ashok Kumar Singh Vs University of Delhi, The Delhi court discussed ways to conduct cross-examination. It emphasised that the inquiry should be conducted according to the principles of natural justice.

The report must be submitted to the District officer within 10 days of the inquiry’s completion and made available to the concerned parties.

Otherwise, it may recommend the employer or the district officer, as the case may take any actions such as –

The above discussion helps to conclude that a well-executed procedure of Inquiry under POSH can speed up the redressal process and provide justice to the aggrieved women at the earliest. This requires the employer and the other relevant parties to have a thorough knowledge of the inquiry process, which can be attained by consulting a professional with expertise in this regard.

Read our Article: Compliance under POSH for Early-Stage Businesses

Overview of Compliance under Planta...

The agricultural sector, including plantations, employs 50 per cent of the workforce, contribut...

How to Obtain Approval for Factory...

The Factories Act 1948 mandates the employer to obtain approval for a Factory building plan to...

Employee Provident Fund (EPF) is required to provide wider benefits to the workers on the compl...